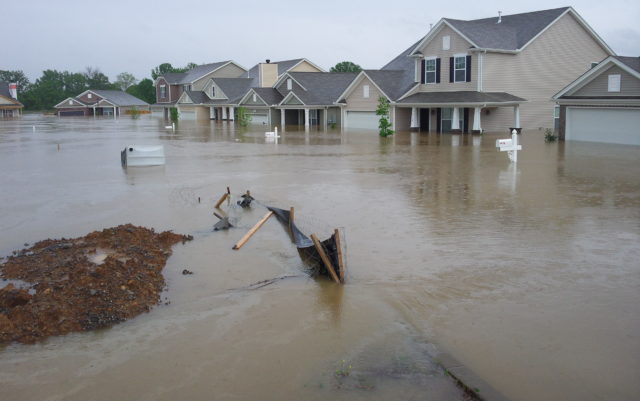 Historically, the Houston area has experienced many devastating storms. By the 1980s, public officials understood the critical value of the wetlands and prairies, long since paved over, in mitigating the effects of storms. Since then, scientists have warned that climate change will cause ever more frequent and more intense storms along the Gulf Coast. Yet Houston kept growing and more disastrous storms kept coming.

Boulder has some of the highest risk for flooding due to its location at the mouth of several canyons and because of development in its floodplain. As Boulder considers annexing (a precursor to development) the Hogan Pancost and CU South parcels into the City, it would be wise to consider the parallels with Houston.

Since Boulder’s 2013 flood, the City and CU have developed a flood mitigation concept at the South campus. Mitigation Option D plans for a 100-year flood event by constructing a dam along US-36 with flood detention behind it. But it is unclear from the information presented to City officials and the public if Option D offers the best cost/benefit and whether other mitigation options not explored might provide better flood protection at a lower cost, when considering the $40 million-plus cost for all three phases of the South Boulder Creek (SBC) flood mitigation plan. The Water Resources Advisory Board (WRAB) evaluated a box of options presented to them by City staff, but didn’t explore outside of that box — WRAB never questioned whether the 100-year event is even the appropriate event to design for versus 200- or 500-year events.

In the context of climate change predictions and available literature such as the Association of State Floodplain Managers (ASFPM) 2011 recommendations and FEMA’s 2013 Climate Change Report, this was a surprisingly passive approach.

Residents surrounding this parcel are very concerned about flooding — it has flooded multiple times in the past 100 years. Over the past 25 years, significant changes to the vicinity that affect the area’s hydrology have been made including development in an area previously designated for flood detention as part of the SBC flood mitigation design.

However, the FEMA flood maps haven’t been updated to reflect all of these changes.

Further, the water table in this parcel is just beneath the ground surface.  But, Boulder doesn’t manage, track or regulate groundwater, so its impacts and changes to the hydrology resulting from development are unknown.

However, these historical risk designations don’t reflect the reality of climate change — New York City recently doubled its estimate of city residents living in the 100-year floodplain in 2050 to 800,000 people. By comparison, FEMA’s estimate, prior to Hurricane Sandy, was about 200,000 people.

FEMA predicts areas at risk of flooding in the U.S. could increase 45 percent by 2100, largely because of climate change. With flood risk on the rise, the flood insurance program (NFIP) will have to insure 80 percent more properties than it does today, and the average loss for each property could rise as much as 90 percent.

Land use decisions tend to be based on local short-term economic factors in the form of community growth and resultant increases in the local tax base.  Local communities gain the “benefits” of tax base growth but then “externalize” the costs incurred during and after a flood to others (via the national flood insurance program and FEMA assistance).

There are several critical elements that must be carefully considered before Boulder decides to allow development at the CU South, Hogan Pancost and other flood-prone parcels:

General: Address flood mitigation holistically. CU South, along with Hogan Pancost and other parcels, offer the opportunity for a chain of undeveloped and restored wetlands along South Boulder Creek that incrementally restore flood buffers that have been incrementally lost over time.

In the context of climate change, reconsider whether the 100 year flood event is the appropriate basis of design for the dam.

Hogan Pancost: Incredibly, despite all the knowledge gained by floods and climate change predictions borne out by recent flood experiences, the Boulder Planning Board, in their August annexation hearing, recommended guiding principles for development that included filling in the 500-year floodplain.

Where will that displaced water go?

It is imperative that City Council decisions give priority to the public good, especially our health and safety.  City Council will hear the case for Hogan Pancost’s annexation in October. Contact them and help them do the responsible thing and vote no to annexation.

Leonard May is an architect and planner and former Boulder Planning Board member and has worked with extensively in international aid, development, disaster recovery and mitigation.