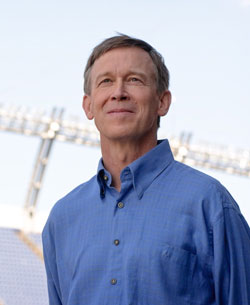 Colorado’s Republi … Democratic Gov. John Hickenlooper was in Boulder a few days back speaking at the FrackingSENSE lecture series that the University of Colorado puts on. As is the norm for the governor these days, he spent a fair amount of time bemoaning his reputation as a puppet of the oil and gas industry.

Hickenlooper claims his critics just don’t understand him. He even went so far the other night as to tell the audience that he’s a “fair witness” when it comes to the issue of oil and gas. A “fair witness,” as in the Quaker tradition of being a neutral party with no preset opinion one way or another on an issue.

Wow. That’s quite a claim. I mean, how many other oil and gas geologists could look you in the eye and say that they’re completely impartial when it comes to … oil and gas?

I actually hope that the governor is simply lying again like he did when he told members of Congress how he drank fracking fluid, knowing all the while that what he actually ingested was a food derivative, as opposed to real fracking fluid, which contains more than 600 chemicals, including many known carcinogens.

I say I hope he’s simply lying, because if he isn’t, then he’s delusional, and that’s a far more serious issue than the Pinocchio syndrome that seems to strike most politicians at some point. But fear not, my fellow Coloradans, there is ample evidence to suggest our governor is many things, some of which are pretty disturbing, but delusional isn’t one of them.

Consider that even as the governor was making his plea in Boulder to be seen as a wise and kind overseer, a sort of Solomon reigning over Colorado oil and gas production, his administration minions were busy working overtime to destroy any chance that the handful of badly needed oil and gas reform bills coming out of the legislature would pass with any teeth left intact. When it comes to political sleight of hand, two-faced Hick is clumsy at best. And MediaNews, the company that owns virtually every newspaper in the county and region except this one, didn’t help the governor’s cause this time around.

In an ironic display of Hickenlooper hypocrisy, which I hope was intentional on the part of Camera staff (beers on me if that’s the case), the daily paper ran a FrackingSENSE story with the governor proclaiming his spiritual commitment to fairness and impartiality on oil and gas issues, directly below an article describing how his administration was working alongside 25 or so oil and gas lobbyists to kill or weaken every oil and gas reform bill being put forward by Democrats, Hickenlooper’s former party.

These are bills that would have done vital things for Colorado, such as studying the health impacts of oil and gas extraction on people living near the polluting production platforms.

Another bill would have added 30 well inspectors to help find leaks and other violations because the current understaffed inspector force of the Colorado Oil and Gas Conservation Commission (COGCC) can’t even begin to monitor the state’s nearly 50,000 wells.

Yet another bill would have extended groundwater testing to the entire state, including the ultra-dirty and highly populated Wattenberg field that covers much of Boulder, Weld and Larimer counties. This particular bill was only needed because the Wattenberg, the state’s largest oil-producing field with more groundwater-contaminating spills than any other area of the state, is currently exempted from state groundwater testing laws.

How could such an insane and irresponsible exemption exist? You guessed it. It was pushed through by the Hickenlooper administration at the behest of the oil and gas industry.

Another bill opposed by the administration and its Republican allies would have raised fines for oil and gas violations from a paltry $1,000 to a paltry $15,000. And the last bill that Gov. “Fair Witness” Hickenlooper is threatening to veto would have restricted industry representatives from serving on the COGCC.

Sponsors of the bill noted that having people who get paid by oil and gas companies regulating oil and gas companies is a bad idea. Is it any wonder that the COGCC is one of the least effective oil and gas regulatory agencies in the nation, as exemplified by its recent mishandling of the Parachute Creek spill that is threatening the Colorado River, as reported in this column a couple of weeks ago.

And let’s not forget that Gandhi Hickenlooper is suing Longmont and has stated his intention to sue every city and town in Colorado that dares pass a fracking ban or any other local oil and gas regulations designed to protect the health, property values and quality of life of residents.

I really wish Hickenlooper were delusional. Then I could just feel sorry for him.

It’s time for the governor to muster up the courage to own who and what he is: a politician beholden to the oil and gas industry who is doing that industry’s bidding over the desires of the vast majority of the Democratic voters who put him into office.

The controversial gun-rights billboards (depicted above) that I wrote about last week in this column have been taken down. Many in the Native American community were angered by the ads. It is still not known who paid for the signs. I’ll keep digging.