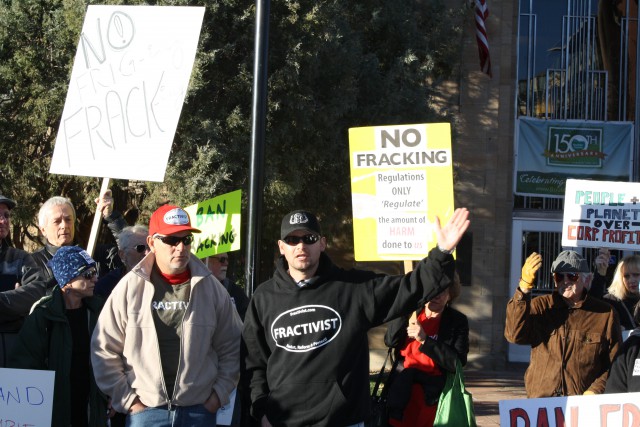 Well, it’s time for another meeting with Boulder County commissioners as they try to move ahead with rewriting the oil and gas regulations that govern our backyards.

As you may recall, the last meeting got a bit rowdy, as anti-fracking advocates disrupted the meeting with chants and heckling aimed at an Encana employee who came to present commissioners with the industry’s take on things. After the meeting, a few activists followed Encana spokesperson Wendy Wiedenbeck and another company employee as they left the meeting to walk a few blocks to their cars. The followers were pretty worked up and screamed really ugly things at the two women and by all accounts pretty much scared the crap out of them. It would have scared me as well. To say the least, it was not the night’s brightest moment for those who oppose fracking and it did do some damage to the cause.

You don’t have to look any further than the piece that Denver Post columnist Vincent Carroll wrote on Dec. 7 to see the fallout. The Post is owned by the same investors who pull the strings at the Daily Camera and Longmont Times-Call as well, so such opinions tend to get around now that the three have become one big paper.

Carroll was apparently so offended by what occurred before, during and after the commissioners’ meeting that he referred to those attending the meeting who don’t like fracking as “The anti-fracking goons in Boulder.” In other words, he used derisive name-calling to make his point and punish those who he believed were guilty of using derisive name-calling to make their point. It gets better.

So why is it that the Post’s columnist decided that those who were outspoken that night in their opposition to fracking, albeit by organized disruption techniques devised to create greater political impact, should be lumped into the “goon” category instead of just calling out the three or four post-meeting hecklers who were out of line following the two Encana employees? The answer came later in his column.

Carroll writes, “The vanguard of the anti-fracking movement needs to look in the mirror. In their crusade to demonize fracking, they’ve become wildly self-righteous, as if they were battling a great and true evil instead of an ubiquitous extraction technique that may deserve additional regulation in populated areas but which has meanwhile been a boon to consumers and businesses alike.”

And there you have it. The Colorado Oil and Gas Association and the Chamber of Commerce couldn’t have said it better. According to Carroll, the problem with those who oppose fracking is that they have the gall to act as if they are fighting against a “true and great evil” instead of the truth, which is that they are just Boulder jerks standing in the way of “a boon to consumers and businesses alike.” I guess Boulder County is just full of a bunch of goons who are too ignorant and self-righteous to understand that rainbows, bunnies and fracking all make the world a better place.

Can’t we all just get along?

Only if you want to get steamrolled by the real goons, the politically powerful oil and gas companies who have bought their way past many of the regulatory safeguards designed to protect our health and the environment. Mr. Carroll, and apparently our commissioners, want everyone to play nice and be respectful and polite. Which would be a great thing to do if the playing field were actually a level one. But it isn’t.

Working politely behind the scenes, oil and gas money was able to get benzene and dozens if not hundreds of other carcinogenic chemicals used in the fracking process exempted from the Clean Water Act. Because it’s safe? Of course not. It was exempted simply because it would cost the industry more money to be environmentally responsible. The tons of air pollutants that pour out from the industry’s tens of thousands of production platforms every year would never be allowed under the Clean Air Act if the oil and gas lobby — presumably working very courteously without raising its voice — hadn’t spread around enough cash to keep the platforms exempted. Closer to home, Colorado is finally going to create a groundwater testing system supposedly designed to make sure the oil and gas companies don’t contaminate our water. The Boulder goons should be happy about that, right? But wait, the ever-polite discourse between the industry and Colorado regulators appears to be getting an exemption for most of the Wattenberg Field that happens to cover Weld and Boulder counties and coincidentally has the biggest problems with spills and groundwater contamination in the state. I could go on and on.

The commissioners, politicians and, sadly, far too many journalists are acting like the playing field is actually level when it comes to energy extraction regulations. They want those who oppose fracking and other destructive, health-threatening oil industry practices to just politely state their concerns into the microphone and then sit down and shut up and let the drilling commence. But it isn’t going to happen, because the playing field isn’t level.

Democracy is sometimes messy and loud and uncomfortable, particularly when those with the power and money are aligned in their opposition to those with nothing more than a voice and a single vote to defend themselves against people who would profit at their expense. Citizens have been doing it the polite way for decades, and all that it has gotten them is one environmental exemption for the oil and gas industry after another, exemptions that can destroy the quality of life of families and entire communities.

There are, of course, some counties that say they want the drilling, but look at them more closely. They tend to be the same counties that are so poor and cash-strapped that they also want meat packing plants, private prisons and nuclear waste dumps so people can work and schools can have a tax base. Such counties are often exploited by dirty industries such as oil and gas.

Boulder’s opposition to fracking is not a NIMBY issue. Those who oppose this practice oppose it everywhere, in Boulder and Weld counties, in Texas, Pennsylvania, New York, California, Wyoming and anywhere else where the ill-gotten exemptions to the Clean Air and Clean Water Acts have created the potential for environmental and public health calamities.

Who are the real goons, Mr. Carroll? Are they those who are organizing to make their voices heard in an effort to protect their families and communities, or those who bribe their way to massive, never-before-heard-of profits by sidestepping the environmental laws?

Yelling at a PR flack from Encana is pointless and wrong. Getting personal, vulgar and overly aggressive with our county commissioners and other elected leaders is counterproductive and likewise wrongheaded.

These local politicians are trying, and they have a heck of a balancing act to pull off. We must appreciate their efforts if not their tactics and decisions. But getting loud and being heard does not make anyone a goon. It is democracy in action, and it is often the only tool citizens have to combat the power of rich corporations that can politely and courteously buy all the influence they need to get what they they want, no matter the cost to the rest of us.