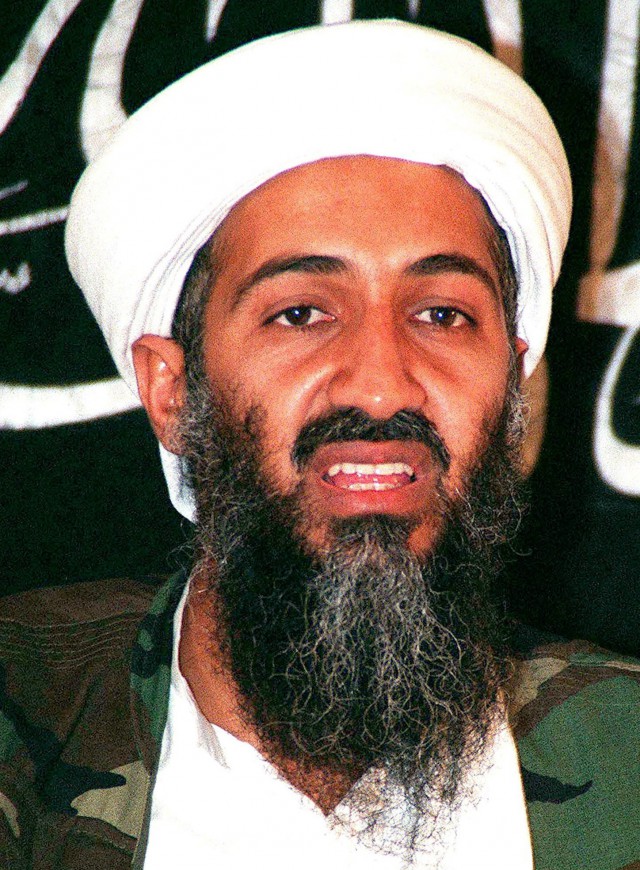 Ding, dong. The snake is dead.

Late last Sunday evening, a Navy SEAL team dropped in unexpectedly on Osama bin Laden and said, in so many words, “Hi, asshole. We understand you want to die for your religion, and we think that’s a great idea. We’re from the federal government, and we’d like to help.”

And they did. Shot him in the head just above his left eye. They got one of his rotten kids too, along with two couriers. If anyone was captured or any computers or documents seized, the feds weren’t saying, but it wouldn’t be surprising if there were, and hopefully that will lead to further raids.

In short, the operation was a fine piece of intelligence gathering and special operations work, and everyone involved from Obama on down deserves unqualified praise. Sometimes the CIA and the special ops guys get it right big time.

This sort of operation tends to produce a lot of fallout, and the fallout from this one — to borrow a line from Apocalypse Now — is going to pile up so fast that we’ll need a pair of wings to stay above it.

Starting out with this inconvenient truth: bin Laden wasn’t hiding out in a cave. He was hiding in a three-story villa in a Pakistani hill town named Abbottabad, which is about a 60-mile drive from Islamabad, the Pakistani capital.

The villa was surrounded by an 18-foot-high concrete wall. Access was controlled through two security gates. There was a 7-foot-tall privacy fence closing off part of the roof of the villa, the top floor of which towers above the wall.

The villa, which was described as a million-dollar home, was supposedly owned by two brothers (the late couriers), who had no visible means of support. And although the place was eight times as large as any other home in its residential district and three families lived in the place, it didn’t have phone or Internet service.

Abbottabad is a town of about 125,000. Judging from some photos of the place posted on the Web, it is at least as charming as Boulder, but more closely resembles Colorado Springs in that it is very much a garrison town.

It serves as headquarters for a crack Pakistani army brigade. It is also home to a military academy, which according to some reports is a stone’s throw from bin Laden’s villa. And, like Colorado Springs, Abbottabad is home to a lot of retired Pakistani army officers and spooks, including a number of retired generals.

And one last detail: Bin Laden’s villa was constructed in 2005 — four years after 9/11 — and clearly appears to have been purpose-built as a hidey hole for a senior terrorist. Indeed, the appearance of the villa is said to have been one of the things that prompted the CIA to suspect the place was a potential bin Laden safehouse.

The unavoidable question presented by the foregoing fact set is, “What did the Pakistani government know and when did it know it?” The short answer is, “Probably everything, and from the beginning.”

It is inconceivable that a property as conspicuous as bin Laden’s villa/compound would have escaped the notice of the Pakistani military in Abbottabad. The brigade commander would make it his business to know what was going on in the fort next door. So would the commandant of the military academy. So would the retired generals and spooks.

In short, it’s a near certainty that bin Laden’s presence in Abbottabad would have been at the very least an open secret, and it is far more likely that everyone in town with military connections knew of it and were actively covering for him. And that, in turn, strongly suggests that bin Laden was in Abbottabad with the knowledge and support of the Pakistani government from the get-go.

And that the Pakistani government has been providing bin Laden with a sanctuary from which he and al Qaida, along with the Taliban, can continue to wage war on the United States.

Seeing as nations have gone to war over this sort of thing, the Pakistani government has some explaining to do, but it needn’t bother. We’ve known for some time that while Pakistan might be one of America’s best friends, it isn’t one of America’s trusted friends. They are what they are, and short of one of their excitable boys setting off a nuke in New York City, we’ll have to take them that way.

But the war with the Taliban and al Qaida will go on bin Laden or no bin Laden, and so will America’s Pakistan problem. But now that America has smoking-gun evidence that Pakistan has been giving aid and comfort to America’s most dangerous contemporary enemy, it should feel free to conduct that war on both sides of the Afghan-Pakistani border, without being overly concerned about Pakistani sovereignty or complaints about collateral damage.