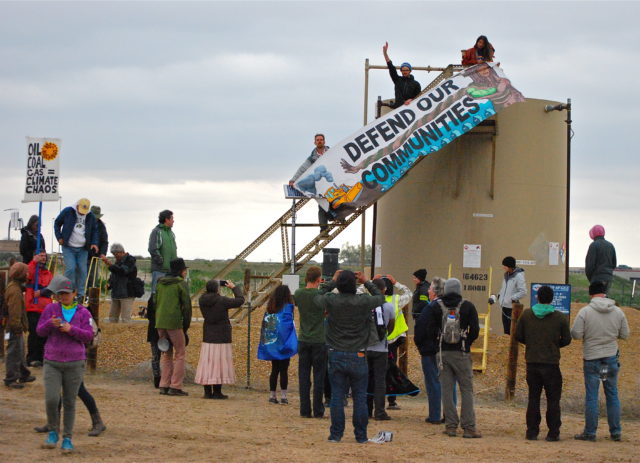 Last Sunday’s Daily Camera contained an op-ed piece signed by all three Boulder County Commissioners explaining to their constituents, yet again, why they can’t impose a moratorium or an outright ban on oil and gas production in Boulder County — as the local anti-fracking cult continues to demand.

The brief answer, in case you’ve been in a persistent vegetative state for the past year, is the rule of law.

Last year, the Colorado Supreme Court declared protracted and serial moratoriums on oil and gas drilling, like Boulder County’s, were both unconstitutional and a violation of state law.

The commissioners’ justification for their endless moratoriums — their re-writings of their oil and gas regulations — was so transparently bogus that Colorado Attorney General Cynthia Coffman sued the commissioners to force them to start accepting applications for drilling permits. Had they continued to stall, they very likely would be looking at a court order and maybe contempt of court proceedings after that, not to mention damage suits from oil companies and property owners.

This prodded the commissioners to finally adopt new regulations on March 23. They are so deliberately Kafkaesque and over-reaching that they will likely get sued by the oil and gas industry for exceeding their authority.

None of which has kept the county’s green-washed rads from calling the commissioners sell-outs to Big Oil and demanding they ban drilling anyway instead of adopting regulations that attempt to strangle it in red tape.

That’s because the rads don’t give a rat’s ass about what’s legal, of course. To them fracking is just an issue to organize around. So they’ve kept up their political exhibitionism for the six weeks since the new regulations were adopted.

Which led the commissioners to write their op-ed explaining their actions to the people, which is a fine example of the political dictum that “when you’re explaining you’re losing.”

“The bottom line is that the state does not allow local governments to prohibit oil and gas development,” they wrote. They then appended a list of 16 things they’re doing “to protect our residents and the environment.”

1. Promoting energy efficiency in homes and businesses and launching a Fossil Free Pilot (sic) to reduce fossil fuel use.

5. Continuing regular local inspections of all oil and gas wells in Boulder County.

8. Continuing to lobby at the legislature for needed changes in state law.

9. Filing a brief to support the legal challenge to Amendment 71.

11. Advocating for the Air Quality Control Commission to strengthen rules on leak detection and repair.

13. Pursuing a lawsuit to hold industry accountable for the hazards and costs of climate change.

14. Filing a brief in support of the Martinez (Earth Guardians) lawsuit.

16. Calling on all oil and gas operators (in the wake of the Firestone tragedy) to shut down vertical wells until they can guarantee there are no safety risks.

Whatever. It’s embarrassing to watch chronologically adult politicians do that much meaningless virtue signaling in public.

The truth is there is one thing the Commissioners can do if they want to stop oil and gas drilling in Boulder County: Buy the freaking mineral rights. Start an underground open space program.

Ask the voters to approve a tax increase to pay for it. If the voters don’t want to put some skin in the game, then maybe the issue isn’t as important to them as the activists make it out to be. If the voters do approve it, then you have a real way of dealing with the issue.

There’s a second way to pay for buying mineral rights as well. There are a number of oil and gas leases on County open space. Sooner or later the lease-holders are going to drill new wells on them. The County gets royalties on any of the oil and gas produced from them; oil and gas royalties are typically 12 to 18 percent.

Use any tax dollars and royalty revenue to buy the mineral rights closest to subdivisions and natural areas where drilling can have genuinely serious impacts.

And here’s a third thing they could try. State law sets the minimum distance new oil and gas wells have to be set back from subdivisions, schools, hospitals and other public buildings, and local governments can’t change the set-backs. But state law is silent on how far new subdivisions and other development has to be from existing oil and gas wells. The County could try amending its land use regulations to require new construction to be farther from existing wells.

And quit treating oilmen as the enemy. It’s decadent to defame and demean the people who make Boulder County’s cozy auto-dependent, natural gas-heated, suburban lifestyle possible. It’s stupid too, when they have as much clout as they do under state law.