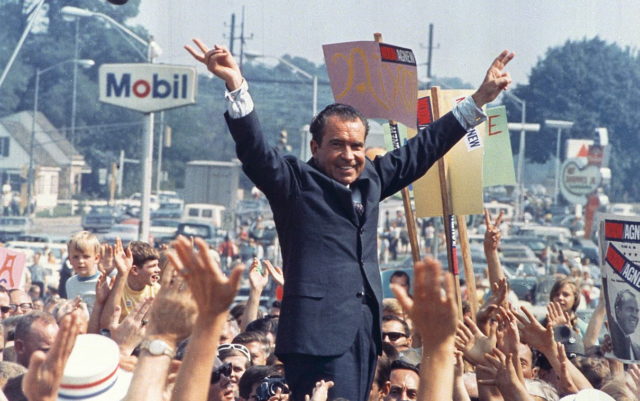 The Idea Fairy and I were testing out a new batch of edibles we’d baked when there was a knock on the door.
It was Richard Nixon.

“Richard, what a pleasant surprise,” I said. “Come in and grab a cool one. What brings you up from the underworld?”
“I just got a gig covering the election for Fox News,” he said. He was positively giddy.

“They said I was uniquely suited to cover this year’s presidential campaign.”

“Why’s that,” I asked skeptically.

“Because both of the major candidates are as disliked as I was,” he said enthusiastically. “In 1968, I proved it was possible to get elected even if a candidate was disliked by millions of the people who voted for him.

“If this year’s election was a popularity contest, it would be impossible to pick a winner,” he added.

“Au contraire,” he said firmly. “This year’s election bears a striking resemblance to the 1968 election in which I was elected for the first time. The parallels are positively uncanny.”

“Now look at the Real Clear Politics (RCP) average of polls for today’s race. It’s a four-candidate race this time: Clinton, Trump, Johnson and Stein. As of last Monday the RCP averages were: Clinton 41.8 percent, Trump 39.6 percent, Johnson 9.1 percent and Stein 2.9 percent. With rounding, and combining Johnson and Stein’s support for statistical purposes, as things now stand Clinton is within a point of me, Trump is within two points of Humphrey and Johnson/Stein is within two points of Wallace.

“So does this mean you think Hillary’s gonna’ win?” I asked.

“Heh!” he snorted. “True, the insanity thing didn’t get as bad as it has with Trump, but even in 1968 people were calling me paranoid.

“And as for the comparison with Hillary, does the phrase ‘Tricky Dick’ mean anything to you? Defining me as deceitful and dishonest became a Democratic Party parlor game almost from the day I entered politics. Trump is just getting the old Nixon treatment.”

“Well they don’t have Nixon to kick around anymore,” I said.
“Touché,” he said, tightly.

“People remember how disliked I was,” he went on, “but they’ve forgotten how detested Humphrey was too. And Wallace, of course.

“The whole left wing of the Democratic Party never forgave Hubert for cheerleading for the Vietnam War while he was Vice President. They thought he betrayed them; they saw him the same way the Sanders people see Hillary and the Cruz people see Trump.

“Wallace was widely hated for being a segregationist. But the Democratic Party’s right wing southerners, a lot of whom were still fuming over passage of the Civil Rights Act of 1964 and the Voting Rights Act of 1965 ended up voting for him. So did a lot of socially conservative northern Democrats who thought the Democratic Party had been taken over by hippies and peaceniks.

“So there are a lot of parallels between this year’s election and 1968: Two major candidates who are about as popular as dead skunks in the middle of the road and voters who will be voting for a president they detest.

“And I’m going to enjoy every minute of it,” he said wickedly.
“OK,” I said. “What happens if one of them actually gets elected?

Is it the end of civilization as we know it?”

“No, it’ll be a return to civilization as we knew it,” he said.
“If Hillary gets elected, she’ll govern like Bill — center-left, but only after moving too far to the left and getting her teeth kicked in a couple times — like over gun control.”

“That’s easy,” he said. “He’ll govern like me. He’ll govern center-right while passing a lot of environmental and social legislation that Obama couldn’t have gotten through Congress in his wildest dreams — even if he knew what he was doing. Like I did when I got Congress to create the EPA. He’ll go to China and go to Russia and sign great deals, like I did. It’ll be huge. Trust me.”