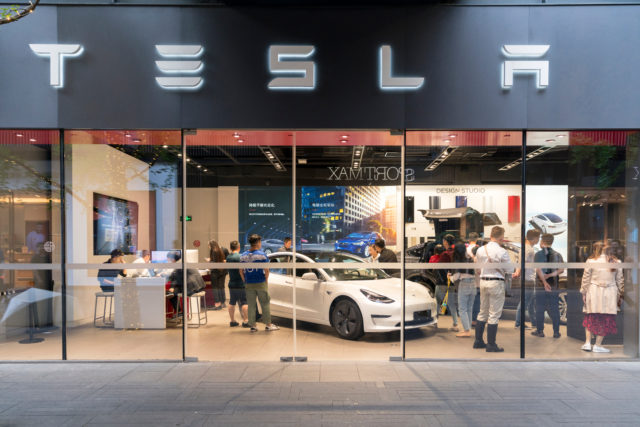 OK, it’s been a lousy year — that much we can probably all agree on — so it would be cool if an old-fashioned, unalloyed miracle could be pulled out of the wreckage in time for Christmas.

And it can. It can be found in the People’s Republic of China, of all places.

Electric cars are the world’s most promising candidate to displace the fossil-fueled internal combustion engine in transportation, for reasons that go beyond climate change, like cleaning up the air in China’s fetid cities, screwing OPEC, etc.

Tesla’s cars have transformed electric automobiles from a niche product into a disruptive technology, but the company has been a high-wire act since its founding. It works off an expand-or-die business plan, and every couple of years it has a near-death experience.

So there was a lot riding on Tesla’s China plant, dubbed Gigafactory 3.

Groundbreaking occurred in a barren, muddy field. It didn’t stay barren for long. By the end of October, the first cars were emerging from the roughly 3,000-foot-long, 500-foot-wide, three-story building with 5.3 million square feet of operational space — which had been put up in less than 10 months.

The pace of construction was breathtaking, and it was lovingly documented by Tesla enthusiast and drone operator Jason Yang. Two or three times a week Yang would fly his drone over the plant site and document progress. (His videos can be found on YouTube at youtube.com/user/jasonyangsha.)

A brief summary of the work appears in the first few seconds of his Dec. 12 video. The ground-breaking was on Jan. 7. By early February there were 15 or 20 pile drivers pounding away on the site. By March the support columns for the roof were being stood up. By April the roof’s structural steel framing was being hoisted into place. By June the roof and walls of the building were mostly up; by August the work on the building’s shell was mostly finished and production equipment was being installed. By September a parking lot for finished cars had been paved, and by the end of September the first cars, Tesla Model 3s, were appearing on it.

The Dec. 12 video shows a 480-space parking lot with about 400 newly-produced cars on it and cars being loaded onto transporters later in the video.

What can we learn from this?

Second, it is possible to build the sort of massive industrial plant necessary to create a non-fossil-fuel auto industry on a time frame previously associated with World War II industrial production, if the will is there to do so.

And in the case of Tesla’s Shanghai plant, the will was there in spades — both on the part of Tesla and, more importantly, on the part of the Chinese government.

The Chinese government wanted Tesla to set up shop in China so badly that it allowed the company to keep 100% ownership of the plant, something that was unprecedented. Previously, foreign auto-makers had been required to enter into joint ventures with Chinese partners.

The Chinese government also expedited the approval process. Tesla announced its intention to build the Shanghai plant in October 2018. Within weeks it acquired the plant site — in a competitive bidding process in which no one else chose to bid. That wasn’t accidental.

“Public environmental consultation” opened on Oct. 24 — and was completed in 10 working days.

In early March, with work already underway, Tesla obtained a $521 million construction loan from a consortium of Chinese Banks.

Third, construction work took place 24/7. That sort of urgency is usually reserved for military construction in wartime. (Tesla actually got its plant up and running faster than Ford built the great WW II bomber plant at Willow Run in Michigan. Willow Run construction began in April 1941 and while the building’s shell was up by September, the first B-24 bomber didn’t emerge until October 1942.)

The fact that Tesla could stand up a major electric car plant in less than a year and have it cranking out cars by Christmas is a bit of a holiday miracle. And coming at a time when the Madrid climate conference flopped, a particularly welcome one.