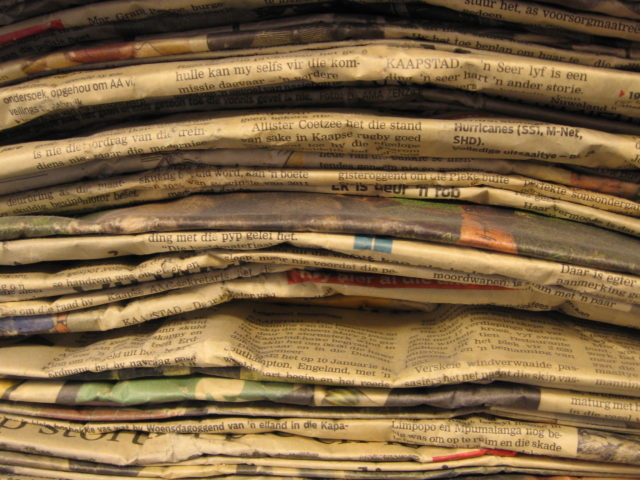 The firing of Daily Camera editorial page editor Dave Krieger sucks for him and is equally bad for you. The fact that a lot of people in local government and pseudo-regulatory organizations around town are glad to see him go should be a warning.

I remember Krieger’s arrival to the Camera well. I was talking to a city employee who asked me if I knew that new Krieger guy at the Camera. She went on to tell me how mad everyone was about the way he was picking on Boulder’s City Council and other esteemed organizations like Boulder’s Landmarks Board and the Mapleton Historic District. All I could do was laugh.

After years of using its editorial pages to cheerlead all things Boulder, no matter how absurd, the paper had finally hired an opinionated, experienced journalist to keep an eye out for governmental and regulatory stupidity. Krieger did exactly what any good editorial page editor should do; he viewed the town he worked in through a lens of common sense and made sure the paper’s readers were informed and aware of all sides of any debate that mattered to the health of the community. It’s safe to say Krieger made sure his readers never got stuck in the “Boulder is Beautiful” feedback loop.

I disagreed with his positions fairly often, but I always respected his take on things and tended to learn something every time I read one of his pieces. Love him or hate him, you had to admire his willingness to ruffle a few feathers, no matter the bird. Unfortunately, it was that willingness that got him fired on April 25 when the bird in his journalistic crosshairs was the hedge fund that owns the Daily Camera along with the Times Call, Denver Post, Broomfield Enterprise, Colorado Hometown Weekly and other newspapers around Colorado and the country.

That owner, Alden Global Capital, has a well-deserved reputation for buying distressed properties and milking them for all they’re worth by gutting them — all the while making ridiculously high profit margins, often at the expense of its newly acquired employees. It’s a fairly evil business model when applied to any industry, but especially so when applied to something like newspapers that play a critical role in our communities and democracy. News is not a widget.

Krieger believed the Camera’s ownership was threatening its newspapers’ ability to do their job and serve their communities. So he decided to share his concerns with the Camera’s readers in the form of a column on the editorial page. That’s what journalists do.

Long story short: Camera publisher Al Manzi decided to kill Krieger’s piece. Not being a fan of such censorship, Krieger went ahead and posted the piece on his own blog. A few days later he was fired for having done so. (For the whole story in Krieger’s words go here.)

The threat to newsgathering, about which Krieger felt the need to warn all of us, pertains to Alden’s willingness to suck exorbitant profits out of its papers even if it means slashing budgets and reducing staffs in a draconian manner to do so. And that’s exactly what the hedge fund has done, enabled by its managers, publishers and editors who have maintained their high-paying jobs only through their willingness to eliminate the livelihoods of those below their own pay grade. I think there’s a name for people like that. Just insert the one you think fits best here: $#@&*.

At a time when the daily newspaper industry is struggling, Alden demanded and got a $36 million profit from its Colorado newspapers in 2017 according to industry analyst Ken Doctor writing for NiemanLab. That is an incredible, industry-high 19 percent profit margin basically extracted from an industry with already shrinking revenues. The hedge fund’s owners didn’t make this money through clever management and innovation. They made it by laying off journalists, copy editors, production staff and others while offering ever-diminishing news products. It’s a shortsighted business model that only hastens the decline in subscribers, which ultimately weakens our local communities and their institutions by eliminating the resources necessary for effective journalistic oversight.

Alden’s ironically named “Digital First” newspapers in Colorado are mere shells of their former selves at this point. The Denver Post’s newsroom staff has been cut from 200 to 70. The Longmont Times Call that once occupied a three-story, block-long building in downtown Longmont now consists of a handful of employees you can count on your fingers and they work out of the Camera’s Boulder office. All of Alden’s papers have become a cheaper-to-produce amalgamation of repurposed content from other Alden-owned papers across the region intertwined with wire service copy of yesterday’s national news. But they could be so much more, and once were.

For those of you who don’t know me, let me assure you that I am not disparaging the journalists at Alden-owned newspapers. They are excellent, they are made to work way too hard, and they spend their days serving their communities in an infuriating and scary world without job security or light at the end of the tunnel. I know they do it for you because none of us do this for the money.

I am writing about this subject because I’ve been a journalist for more than three decades and I know just how important it is to have a healthy local daily newspaper. All of us need these newspapers, but only if we can trust them.

And that is the larger tragedy resulting from what Camera publisher Al Manzi and his Alden Global Capital overseers have done by first censoring then firing Dave Krieger. How can we trust the Camera so long as Manzi is in charge and willing to carry out Alden’s anti-journalistic business practices, which appear to have now added censorship of anything that could harm its profits into the mix?

Think about it. It is now impossible for any actual journalist to take Krieger’s old job as editorial page editor. No actual journalist can accept such a position knowing that he or she is not allowed to tell the truth on any subjects the publisher and/or his hedge-fund bosses choose to censor. Anyone accepting the editorial page job under such preconditions can call themselves a writer or a secretary or anything else they want, except a journalist.

The damage is done. When it comes to journalism’s code of ethics, the appearance of impropriety is to be avoided with the same vigor as impropriety itself. From where I sit, Krieger’s firing is the former, and the paper’s silence on his termination thus far is at best the latter.

When I say we can no longer trust the Camera, I’m not talking about the stories on its pages. We don’t have to wonder if what the Camera’s reporters write is true — it is.

What we have to wonder about in light of Krieger’s firing is what the Camera is hiding from us byway of omission in an effort to boost its bottom line. It has been said, “no one has to tell a good reporter where not to look.” And that is the destructive power of the damnable message that Manzi sent into Alden’s newsrooms everywhere when he fired Krieger.

This is the sad legacy left in the wake of Krieger’s undeserved termination, and in my view, it can’t be undone until the paper’s management and ownership have changed.

I hope all of you will support the Camera’s employees as they continue their struggle to keep their important and irreplaceable institution in place until a more suitable owner can be found. We all need a healthy daily newspaper.

Here’s to you, Dave Krieger, feather-ruffler and lifelong, committed journalist. May your next gig be bigger, better, free of hedge funds and without fear of censorship. You’ve earned it.

P.S. Maybe now we can finally grab that cup of coffee we keep putting off.