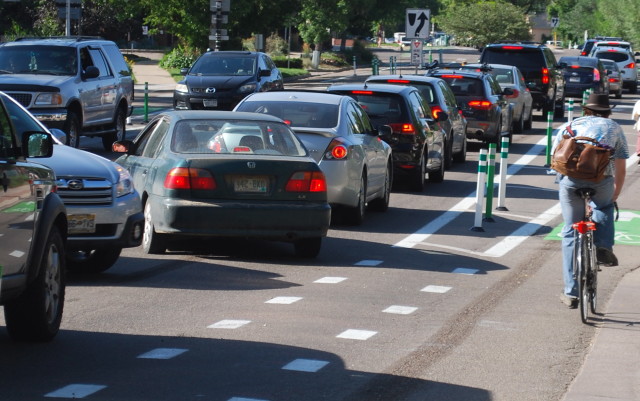 When I arrived in Boulder in the mid-1980s, it had already become a “bike” town. The “Red Zinger Bicycle Classic” and “Coors International Bicycle Classic” were still household phrases, and Andy Hampsten and Davis Phinney were household names. You could ride your road bike south of town on the famous Morgul Bismark Loop, which was a relatively quiet ride without a lot of cars on it at that time.

Many years ago I owned a bike shop, and I’ve been a bicycling enthusiast ever since. When I came to Boulder, I started working in a bike shop and threw myself into biking in Boulder County. I even wrote books on the topic, perhaps one of the very first books on local cycling, titled Gold Hill And Back: A Mountain Bike Escapade,  in 1991.

In the mid-1980s, Highway 36 going up to Lyons had some traffic, but it didn’t feel especially dangerous riding a bike on it. Once you got off 36 onto Nelson Road and other backroads, there were fewer and fewer cars. Boulder Canyon going up to Ned was pretty busy, but we rode it without feeling like our life was at risk, and the same with Flagstaff Road.

Like it or not, when you’re on a bicycle, cars are the enemy. You avoid them, never trust them and always assume they don’t see you. It’s not personal — about the person driving the car, which I also have and drive — but cars injure and kill bicyclists, and the more cars, the more dangerous it is to the bicycle rider. It’s also true that bicyclists can be at fault and sometimes are. But as a general rule, if you love bicycling or just use it for transportation, you prefer fewer cars and less urban environments — it’s safer, quieter, less polluted and more enjoyable.

In the last decade, the radical push for “high-density growth” in Boulder, and the general pressure of population growth in Boulder County, have made Boulder a less friendly, less safe and less enjoyable place to be a bicyclist. More and more bicyclists are avoiding city streets and sometimes avoiding road riding altogether. “Gravel” riding, for recreation, has become popular as a way to avoid cars and stay safer. Bicyclists also avoid cars by riding in the canyons, and the farther up you go, the fewer cars you compete with. Planning entire rides, and entire biking lifestyles, around avoiding cars and traffic is a big part of many bicycling conversations in Boulder.

Just recently, an article was written in Outside Magazine about how bicyclists are increasingly abandoning Boulder — literally leaving town — due to the traffic and population growth, which is very sad and unfortunate. There are actions that Boulder can take to make the community safer for bicyclists:

First, stop luring more people, more cars and more businesses — “high-density growth” — into Boulder. Population growth not only makes it noisier, more polluted and less safe for bicyclists, it degrades everything most Boulderites love about Boulder.

Second, the City of Boulder has done a great job supporting bicycling safety by building separated bike paths and bike lanes throughout town. The draft “Boulder Transportation Master Plan” is out for comment right now, and I commented that Boulder should add even more bike safety features.

Third, I’d love to see the no-car zone expanded in downtown — perhaps farther east on Pearl, and north and south to include parts of Walnut and Spruce Streets, with bike paths intermixed with pedestrian zones.

In good weather months, I recreate by riding in the canyons or even farther uphill around Ned. In the winter, I avoid cars by sometimes doing Marshall Road loops and then up to NCAR. Or, I run more up Flagstaff and up the Anemone Trail and simply bike less, and then ride the canyons when the sun melts off the snow.

For commuting, I still sometimes use my bike in Boulder, but I’d like to use it more. Improving safety features for bicycling and stopping high-density growth would make Boulder biking safer and a lot more fun.