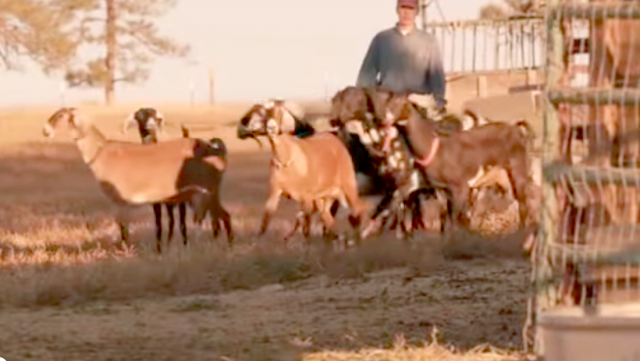 Just because we’re on the other side of election season doesn’t mean the advertisements stop. You’ve probably seen it by now: a “Front Range” “organic” farmer telling us that people should support fracking because it helps farmers like her pay for healthcare and their kids’ education. But, like many of the industry’s ads, that’s not the whole story. The ad forgot to mention that the organic farmer makes her primary income working in the oil and gas industry and that while she’s breathing clean Elbert County air at her “organic” farm, free of wells, the royalty income she’s touting as so important to her farm is coming from mineral interests she owns hundreds of miles away in heavily drilled and polluted Garfield County.

“We have never used pesticides, chemicals, those kinds of things — we don’t use any ‘weed and seed,’” Smith told Boulder Weekly in a phone interview. “I’m a huge gardener also, and those types of things have always been environmentally conscious [choices for us]. Two years ago we made the decision to begin upgrading as much feed as possible to organic for the livestock.”

But farming isn’t Smith’s full-time job. Smith is a 30-year veteran of the oil and gas industry. She’s been with oil and gas investment business Quiat Companies since 1992 as a land manager, focusing on acquisitions, divestitures and coordination of joint drilling ventures. She’s the president of the National Association of Royalty Owners’ Rockies chapter, a board member of the energy-promotion group Vital Colorado and a member of the American Association of Petroleum Landmen.

It makes sense, then, that organicbased farmer Smith is also the newest face in the oil and gas industry’s television ad campaign to promote hydraulic fracturing in Colorado. But Smith’s narrative gives rise to more questions than answers — can Coloradans trust the veracity of claims made by someone so deeply entrenched in the industry in an advertisement sponsored by the industry?

“Mineral rights make all the difference to our small organic based farm,” Smith says in the advertisement, which is sponsored by Coloradans for Responsible Energy Development. CRED was formed by oil industry giants Anadarko Petroleum Corporation and Nobel Energy.

The ad continues, “Like many Colorado farm-to-table businesses, if we can’t offset operating costs with our minerals, then we’re out of business,” Smith narrates over sun-dappled shots of her Elbert County farm, a smattering of goats ambling out of their pens, a medium shot of hands pulling forward a tray of sprouted barley. “Organic operations are expensive. People like us rely on those payments for their family’s healthcare or their kids’ education. An attack on fracking is essentially an attack on landowners like us. Those who would ban fracking ignore our rights, and that just gets my goat.”

Puns aside, Smith’s message zeros in on the rights of mineral owners without ever directly acknowledging concerns many Coloradans have about the effect fracking has on the environment and public health. Smith’s title in the ad as an “organic farmer” — as opposed to saying she’s primarily employed by the oil and gas industry — is designed to imply that fracking is a clean practice. But how could an organic farmer on only 40 acres be so welcoming to dirty, air-polluting wells on such a tiny acreage? There is an answer.

Smith and her husband own two seperate mineral estates: 100 percent of the minerals underneath the 40 acres their farm and home sit on in Elbert County, and a portion of the minerals contained within an 80-acre tract in Garfield County, Colo.

They have leased the minerals in Garfield County multiple times, according to Smith, but have yet to ever lease the minerals where they live and breathe in Elbert County. Smith claims she has received an offer to lease the Elbert minerals and that she is currently reviewing the offer.

It was the intention of Boulder Weekly to obtain the exact location of the Smiths’ mineral interest in Garfield County in order to directly speak to the surface owners and residents who are actually being impacted by oil and gas operations in the area, but Smith declined to reveal her minerals location saying she’d “rather not disclose that.”

Tresi Houpt, a former Garfield County commissioner, was instrumental in a push more than a decade ago to determine exactly what kind of emissions are coming from oil and gas operations. Houpt found then, in 2002, there simply were no local, state or federal studies on what was in the air near wells.

“The difficulty with obtaining health data is that you have to have governments that are committed to doing a long term study,” Houpt says. “When we first made the decision to conduct a health study in Garfield County we know it would be a long process. After I was no longer on the commission they decided it was too politically charged and they didn’t want to move forward.

“I know there were people in Garfield County during the [oil and gas] boom time when there were thousands of trucks on dirt roads and pads active everywhere — people were waking up coughing up blood, fainting when they smelled natural gas,” Houpt says. “I know there are people who are more sensitive to fumes and the chemicals used, but regulators have a difficult time… I don’t know if they don’t believe these people or if they rationalize not putting stricter regulations in place because we don’t have concrete data on it.”

And while there is still a desperate need for “concrete” data, there is a growing body of research implicating oil and gas operations in numerous health problems. A 2012 study led by Lisa McKenzie of the Colorado School of Public Health examined three years of data and found found elevated risks of cancer and non-cancer health problems — eye irritation, headaches, sore throat and difficulty breathing — among people living within a half-mile of wells. A Yale study from this year backs up the McKenzie study with data showing people living within 1 kilometer of a natural gas well have up to twice the rate of respiratory and skin conditions as those living farther away. Susan Nagel led a University of Missouri study earlier this year that found greater levels of hormone-disrupting chemicals in water located near fracking sites than in areas without drilling. Of the water samples Nagel took back to her lab in Missouri, a number were from water sources near heavily fracked areas in Garfield County. And finally, a Garfield county study was done to determine air quality near wells. It was determined that more than 40 chemicals used in oil and gas extraction were in the air and therefore presumably creating exposure to those living near wells.

Garfield, for the record, is the second most heavily drilled county in Colorado. Of the more than 52,000 active oil and gas wells in the state, Garfield contains just south of 11,000. Elbert, by comparison, has only 71 active wells, according to a Dec. 2 report for the Colorado Oil and Gas Conservation Commission.

So, some 250 miles away from Garfield County, it makes sense that when asked if she was concerned about how fracking and drilling could impact her health, Michelle Smith responded with an unqualified no, adding that she herself is a cancer survivor.

“In fact, actually working in the oil and gas sector has increased my confidence in the safety of fracking because I know all the facts surrounding fracking,” Smith says. “Because it’s a one-time operation, done at a minimum, in Colorado, of 7,000 feet below the ground, it is extremely safe. In addition, [the U.S. has] now fracked over 2 million wells without one case of contaminating any groundwater.”

But Smith’s claims concerning groundwater contamination are overstated. A University of Colorado Boulder study from May found that oil and natural gas wells emit upwards of 13 tons of volatile organic compounds each hour. So-called VOCs contribute to ground-level ozone pollution, which, at high levels, can harm people’s lungs and damage plants — and that’s just science.

The Environmental Protection Agency believed it had identified three areas with significant groundwater contamination from fracking: Pavilion, Wyo., Dimock, Penn., and Parker County, Texas. After years of research and just before turning over its findings for peer review, the Obama administration pulled the plug on the EPA’s work and declared its plan to use natural gas as a “bridge fuel” to combat climate change.

“I believe that we live in the greatest country in the world and the reason that is is because our country was founded on freedom,” Smith says when asked what prompted her to be in the advertisement. “In Canada a small portion of the population owns a few mineral rights, [but] basically [the U.S. is] the only country in world where citizens can own mineral rights. And that is a right that has to be advocated for and protected. So I’m very passionate about standing up and defending the right to have our minerals developed.”

Smith maintains that there is no sufficient evidence to indicate that fracking is harmful at all.

“I believe we have enough history with fracking to prove that it’s safe,” she says. “With any industry there is always some impact, as with any kind of industrial process. But people focusing on fracking… if they would take the time to do the research that is easily available, especially on the Internet, the evidence is there — there have been no proven cases of any harm caused by fracking.”

When asked if she has seen Smith’s advertisements, Houpt responds with a sigh.

“It’s not just that particular advertisement but the ad campaign as a whole that makes the natural gas industry [look like] people’s friend and a viable clean resource that’s misleading,” Houpt adds. “I think people in their everyday life are very busy. The whole conversation in the development of oil and gas is very complex … for the industry to put out an advertisement that sends a message that oil and gas development is even safe for organic farmers is just absolutely wrong.

“I wish the other side had enough money to put out a commercial that really talked about the potential impact of development close to homes and close to other business and close to wild and scenic areas,” Houpt says. “I just think that people need to recognize that you don’t get the whole story when you’re watching TV and a commercial comes on. We can’t be complacent about this — it’s too important.”