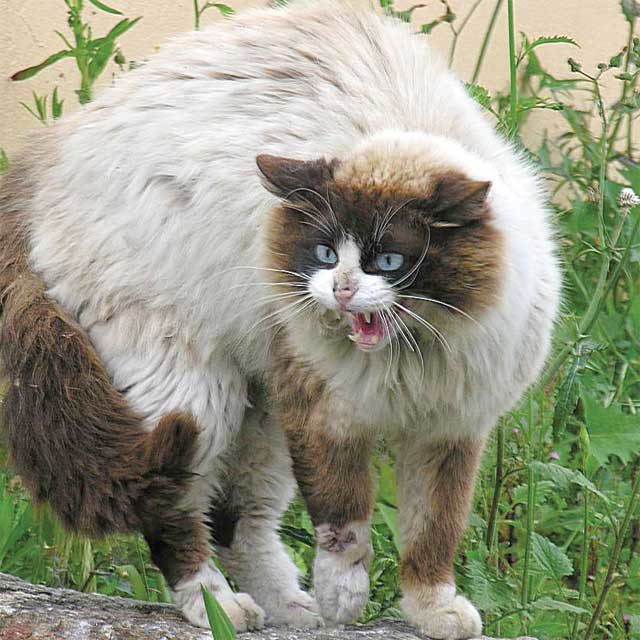 What do paranoia, Obsessive Compulsive Disorder and an affinity for unconventional sex have in common? No, not Donald Trump.

Scientists think these behaviors — and many more — may be caused by a parasite infecting 30 to 50 percent of the world’s population, including 60 million in the U.S., sometimes transmitted by domestic cats.

Toxoplasma gondii is a protozoan — that’s a single celled organism, for you non-science geeks — and one of the world’s most common parasites found inside hundreds of species of warm-blooded animals.

Toxo is the reason pregnant women shouldn’t change cat litter, as they might pick up the parasite from feces and potentially pass the infection on to their babies, which could cause blindness, brain damage or other serious health problems.

Here’s where it gets really weird. Scientists have uncovered a science fiction-like link between the infection and your chances of getting into a car crash, how snazzy a dresser you are, and what turns you on in the bedroom.

There are actually dozens of human behaviors — some benign, others disturbing — that may be Toxo-induced. If you’re squeamish, you might want to stop reading, right meow. For the rest of you, it’s time to let the cat out of the bag.

Dr. Stefanie Johnson is an assistant professor at CU’s Leeds School of Business. She and her husband, Dr. Pieter Johnson, have teamed up with the U.S. Department of Agriculture at CU’s Johnson Laboratory to study how Toxoplasma gondii spreads among wild animals, how it infects humans and what behaviors it may be influencing.

“We are definitely underestimating the potential of Toxoplasma to affect behavior,” Johnson says.

For instance, multiple studies have shown a significantly increased risk of traffic accidents involving people with toxoplasmosis (the human form of Toxo infection), reduced reaction times being the likely culprit. Toxo has also been linked to Obsessive Compulsive Disorder, with nearly half of OCD-afflicted subjects testing positive for the infection, according to one study.

Even stranger, some Toxo-generated behaviors are thought to affect women and men differently. According to a series of studies, infected females seem to get the better deal, becoming more outgoing, trusting and generous. Men, on the other hand, become more introverted, suspicious and messier. Toxo-masculinity, anyone?

Male, female or otherwise, Johnson says that infected subjects are more likely to engage in risk-taking behaviors, which could be a problem in dangerous professions such as construction or the military.

However, as Johnson reminds us, “risk isn’t always bad.” To the contrary, some of her research suggests that entrepreneurs are more likely to have toxoplasmosis, the parasite possibly giving them the courage they need to launch new businesses.

“We like to believe that we’re in control of our own behavior. That’s the fundamental characteristic of human beings, volition,” Johnson says. “No one would want to believe that the things that they do could actually be affected by something other than their inner desires.”

But before you drop Fluffy off at the shelter, here are a few things to keep in mind. First of all, if your cat stays indoors it probably doesn’t have the parasite, typically contracted by eating rodents and birds.

Second, healthy immune systems are so good at fighting this particular invader that the vast majority of human infections cause no symptoms. That being said, those with HIV or other immunocompromised persons may be at risk.

Further, Johnson — a cat owner, herself — points out that cats aren’t the only vector. In fact, she says that her husband, Dr. Pieter Johnson, has a theory that a large number of Toxo infections may actually come from eating undercooked meat, such as deer.

Eating raw seafood, drinking contaminated water or milk, or not washing your vegetables can also spread the love. By the way, Toxo is also an STD.

Speaking of sex, if you’re a man, toxoplasmosis might actually make you more attractive. In one study, 109 women were shown photos of 89 men — 18 of the guys testing positive for Toxo. Sure enough, the infected males were repeatedly rated as more “dominant” and “masculine” than their uninfected peers. It’s thought that a boost in testosterone may be the cause.

In another study, infected subjects were drawn to sex acts involving violence, bondage and fetishism, along with some other kinks you’ll have to look up yourself. Overall, folks harboring the parasite were more turned on by their own “fear, danger, and sexual submission.”

At this point you might be wondering what Toxo’s evolutionary game plan could possibly be. After all, how in the world could tricking people into crashing their cars and tying one another other to bedposts help disperse the parasite?

It’s certainly not uncommon for microbes to affect the behavior of their hosts. Rabies compels animals to bite to broadcast the virus. Our gut bacteria may influence our mood. Even the flu is suspected of making people more social.

Perhaps the answer here lies in the so-called “fatal attraction” behavior found in Toxo-infected rodents. Rats and mice testing positive for the parasite tend to find the smell of cat urine irresistible, drawing them to the felines they typically flee, basically serving themselves up on a platter to their killers.

While present inside many species of warm-blooded animals, Toxo can only reproduce in the gut of a cat. Therefore, a self-sacrificing host is the easiest way for the parasite to complete its life cycle.

But what does this have to do with us?

Well, it just so happens that chimpanzees are a favorite food of leopards and lions, suggesting that early humankind may once have been on the menu as well. Let’s not forget that lions and tigers prey upon scores of people in Africa and Asia every year, while here in the western U.S. mountain lions may stalk the occasional hiker.

Makes you wonder what that Lion King song “Circle of Life” was really about.