On any given Monday, about a dozen people gather around a conference table on the second floor of the Boulder Public Library. There are people from Mexico, Argentina, South Korea, Tibet, Eastern Europe, Nepal and Ethiopia. All have a different story to tell, but all are studying to become U.S. citizens.

For the last 14 years, Anita Stuehler has been teaching free citizenship classes at the library, not a requirement for naturalization, but a helpful tool for people at any stage in the process.

“[The classes] are to help people go in for their interview more confident and more sure of what’s going on,” Stuehler says. “You can have someone come in here with a PhD from Canada and speaks perfect English, or you can have someone who has escaped from Tibet and can’t even write their own name. And it’s usually somewhere in between.”

Since 2012, there has been a 35-percent increase in the number of citizenship applications, according to U.S. Citizen and Immigration Services (USCIS), but the number of individuals naturalized has remained roughly the same, with 700,000-750,000 people becoming citizens each year. Last year, more than 6,300 people were naturalized in Colorado and Wyoming. The year before it was almost 9,000, and in 2015, more than 9,500 people in the two states became citizens.

Stuehler, a retired librarian, has developed her own curriculum, organized in five or six notebooks she keeps at home. A lifetime lover of history, she uses the materials USCIS provides and attends training sessions at the USCIS offices in Centennial, but she also depends on her own research. In May, she joined 82 other people for a day-long seminar about “creating and maintaining a comprehensive adult citizenship education program.”

Stuehler adapts the class each week, depending on the needs of the people who attend, but generally has a four-to-six-month curriculum she follows. The majority of time is spent going over the 100 questions people could be asked as part of their naturalization interview.

The questions range from geography, to history, to political process and government. Over time, the questions have changed, Stuehler says, most recently in 2008 when Barack Obama became president.

“A lot of them are a bit more abstract now, whereas before it was just what is the name of the ship the pilgrims were on. There’s one answer to that,” she says. Now questions include more political theory, such as, “What is the rule of law? It’s just not a straight answer,” she says.

Questions can be about the economy (When are taxes due? What is the economic system of the U.S?); history (What territory did the U.S. buy from France in 1803? What did Susan B. Anthony do?); or geography (Name one state that borders Canada. Name one U.S. territory). Potential citizens have to know the name of the Chief Justice of the Supreme Court and the Speaker of the House, as well as their state and federal representatives, positions that can change over the course of studying while waiting for an interview. Right now, the Boulder students know Jared Polis as their U.S. Representative, but come November, he could be the governor.

But roughly one-third of the questions are about the U.S. Constitution, and Stuehler says the majority of her classes center around the founding document.

“Even if they don’t take the class, just from the questions, they will know more about the Constitution than most Americans,” she says.

Stuehler tries to avoid getting too political in the class, but that doesn’t stop her from expounding on her deep belief in the beauty of the Constitution and the freedoms it affords.

“If you think about it, when was it written?” she asks the class, reiterating one of the questions they could be asked in their citizenship interview. “The Constitution was written in 1787. Things were very different in the world then. Think how different they are. And yet this Constitution continues to rule this country, all these years later. It’s pretty amazing. There are a whole lot of laws that have changed, but the Constitution, the ruling document, the supreme law of the land, has only been changed 27 times since 1787.

“What are those 27 changes called?” she asks, as the class responds in unison: “Amendments.”

“What are the first 10 Amendments called?”

“The Bill of Rights.”

One regular attendee interrupts Stuehler’s line of questioning and looks directly at me.

“We want to say thank you to Anita and Marion (Stuehler’s assistant). They teach everything about the Constitution and about the government, and that’s how we are going to be better,” he says.

Everyone else around the table nods their head in agreement, looking up at Stuehler.

“It’s just great to be here with you guys. It’s just the highlight of my week, every week, no matter what happens in my life, when I come here with you, it lightens my soul. It really does,” she says. “OK, so, Commander in Chief…”

The new topic brings up a barrage of questions about executive powers, declarations of war and current events.

“It can all be confusing,” Stuehler explains. “So all I can keep saying is once you get the right to vote, get involved so if there’s something you don’t understand or something you want to see changed, get involved. That’s how civil rights changed, how women got the right to vote, that’s how slavery ended, that’s what changes things, is the people speaking up and that’s one of the freedoms that we have.”

The right to vote is a primary reason people in the class are applying to become citizens. That and the security citizenship affords.

“There’s a security, to be honest. I will be able to vote, and I already have a voice but it’s not heard, but now I [will] have the power to say, ‘I can vote,’” a student named Crystal says. “The past election, I didn’t feel like I could do anything. I mean, I could say whatever I wanted, but no one was going to pay attention to it.”

Crystal moved to the U.S. from Durango, Mexico, in 1996 when she was 11 years old. Her dad had lived in the U.S. most of his life, qualifying for amnesty under President Reagan’s immigration reform in the mid-1980s. One of 10 siblings, Crystal and her family first lived in California before moving to Boulder. She graduated from Boulder High and has lived in the area ever since with a lawful permanent resident card, set to expire next year. Instead of renewing, she’s decided it’s time to naturalize.

“I’m from Mexico, I didn’t want that to go away,” Crystal says. “I understand now that’s not how it is. I can still be Mexican and also a U.S. citizen.”

Her mom became a citizen three years ago, as are most of her siblings, except two who live and work in Mexico. 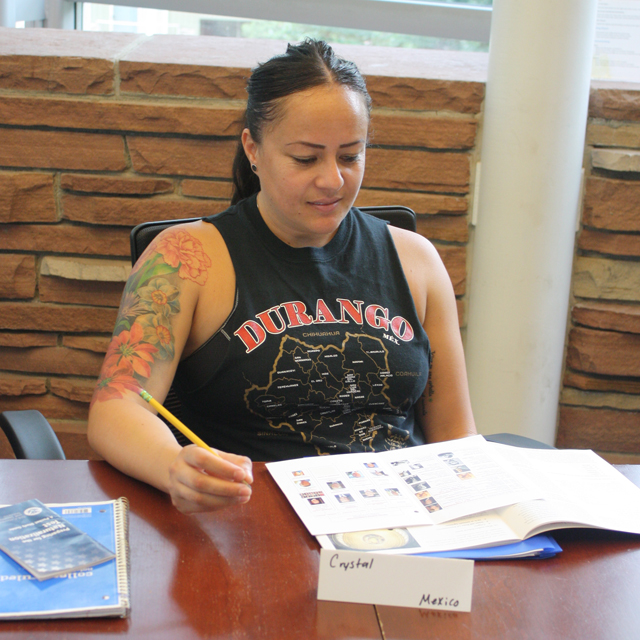 “Now that I have a son, I need to be more secure, established, to feel safe,” she says. “I want to become a U.S. citizen so I can teach my son the right to vote.”

Stuehler is joined each week by an assistant, Marion Mackay, who became a citizen eight years ago after taking the class at the library. Originally from Canada, Mackay has lived in Boulder since 1975.

“She asked me so many questions, I told her she has to stay,” Stuehler says.

When a new student walks in, somewhat unsure of what’s going on, Mackay takes her aside to sign her in, gives her some studying materials and makes sure she’s eligible to apply for naturalization, although this is not a requirement to attend the class. Have you lived in the U.S. as a lawful permanent resident (a green card) for at least five years? Have you been in the U.S. continuously for the last two-and-a-half years?

“They want to feel like they belong,” Mackay says about why people apply to become citizens. “That’s how I felt.”

“The decision to become a citizen is a very personal one, it’s an individual choice. So is the decision to take classes,” says Debbie Cannon, public affairs officer at the Centennial USCIS office.

Some people in the Boulder class have already turned in their application and are waiting to hear when their interview will be scheduled. Others are still working on their application, continuing to study while they make sure they have all the correct information and the finances to pay for it.

When Stuehler started teaching the class, the application fee to become a citizen was $450. Now it’s $725, last raised in 2016. According to USCIS, the average wait time to process a citizenship application is 9.7 months. Some people in Stuehler’s class have been coming for a few years as they slowly move through the process, others come when they find out their interview date, leaving them about a month to study all 100 questions.

“I really didn’t know what to study. It’s always easier to memorize after I understand all the historical background or political background,” says Caitlyn Ko, who took the class and became a citizen last year. “Studying really helped me to understand, not only memorize the questions.”

Originally from South Korea, Ko has lived in Boulder the past seven years and, since becoming a citizen, has finished graduate school and applied for government jobs, a luxury afforded only to citizens.

“I can have more opportunities, same as other Americans,” she says. “I feel so safe and secure.”

Recently a grandmother from Tibet, who moved to Boulder six years ago to help take care of her grandchildren, didn’t pass the test on the first try on account of her English. When Stuehler tells the class, the group lets out a collective, sympathetic sigh. Stuehler reassures them, however: the grandmother is dedicated, and still has a second chance at passing the interview before she would have to reapply, paying the $725 all over again.

The same day, another student brings in cake for the whole class to celebrate her recent citizenship. Her interview only lasted 12 minutes, she says, as other students prod her for details. The interviewer was nice, but professional, only looking her in the eyes twice, she says.

Out of the 100 questions the group studies each week, only six are asked at the naturalization interview, at the most 10, as each person is allowed to miss four. “We don’t use the word test, it sounds intimidating,” Mackay says.

The new citizen answered the first six questions correctly and quickly passed the English proficiency portion, where she read a sentence out loud in English and then wrote a different sentence the interviewer read out loud to her. Then she answered questions about her specific application before he took out a large stamp, stamped a few papers and handed them to her. She’s visibly excited recounting the moment she realized she passed.

“Glad you were there to experience the excitement of a new citizen,” Stuehler tells me later. “It is always like this when they come back to tell the class about their interview. I have been asked many times why I have spent almost every Monday teaching the class for the last 14 years. And I have to say to see someone so excited about becoming a citizen is the main reason why.”