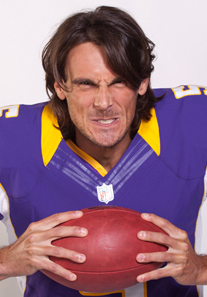 Minnesota Vikings punter Chris Kluwe teed off on a Maryland state delegate in a big way Sept. 7, in an open letter posted on Deadspin.

Raven Brandon Ayanbadejo has said he favors a ballot initiative in Maryland that would allow gay marriage. In response, Burns told Bisciotti to “inhibit such expressions from your employee.”

See the open letter at Deadspin.