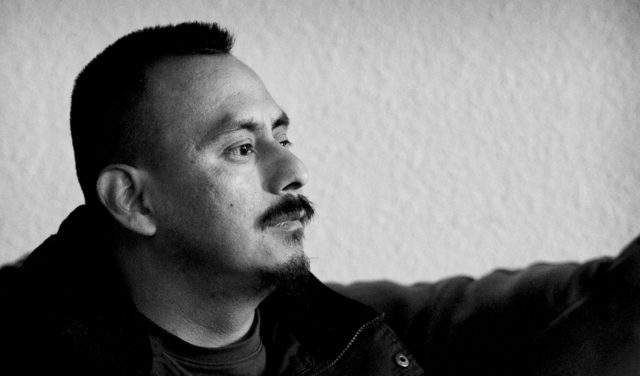 Victor, who emigrated from Guatemala in 1999, always carries a letter from his doctor, just in case. From Salud Medical Center in Longmont, Victor’s doctor of more than 10 years, Dr. Michael Allen, says, “I am writing this letter in regards to Victor’s complex cardiac medical problems and to be his advocate in regards to citizenship and the high risk prognosis on his health if he is forced to return to Guatemala in regards to his citizenship.”

With a diagnosis of severe cardiomyopathy and congestive heart failure, which consequently leads to a long list of other health issues, Dr. Allen says that if Victor is returned to Guatemala, he “has a very high risk of death.”

But in reality, Victor, 36, isn’t really worried about immigration authorities or his undocumented status or the possibility of deportation. Right now, all he’s worried about is what would happen to his wife and daughters if he can’t get the heart transplant he so desperately needs.

“If something happens to me, what is she going to do to sustain them?” Victor says, looking at his wife, Estella, in their Longmont living room. Their daughters Ailin, 10, and Yaretzi, 5, are giggling and watching TV in the next room.

Victor and Estella met in school as kids, but didn’t see each other for several years as they both left Guatemala for the U.S. Victor came to Longmont when he was 17 years old to join his father, a legal resident, who had been living in Colorado for more than a decade at that point. Meanwhile, Estella immigrated to Arizona with her aunt. For years, the two kept in touch over the phone as they established their respective lives in the U.S.

Although his father wanted him to keep studying, Victor wanted to start working and joined his cousins as a welder. The first signs of health issues appeared in 2005, when his legs began to swell. A common side effect of cardiomyopathy, his cousins took Victor to the emergency room, where they told him his heart was enlarged. “I don’t know if I had this problem in Guatemala or if I was born with it. I didn’t have any issues before,” he says. “They said it could be a virus. They haven’t been able to tell exactly what it is.”

For the next decade, Victor’s heart remained more or less strong, with only one visit or so to the hospital each year. Still, when Estella found out about the diagnosis, she moved to Longmont in 2007 and the two were married. Ailin and Yaretzi followed soon after.

In 2016, the condition worsened, and Victor went to the hospital three times in both 2016 and 2017 to drain his liver of fluids, a result of his heart not being able to properly pump blood throughout his body. By that time he was working in landscaping, and “the man I was working for understood my situation, and he would only give me a few hours, and he would give me light tasks to do,” Victor says. He was able to take a few weeks or a month off after each hospital visit, and return to work. But at this point, he hasn’t been able to work for more than a year.

Estella works two jobs in fast food trying to make up for it, and she advocates for her husband at hospital and doctors visits.

“It’s hard,” Estella says through tears. “This year he’s gone about five or six times to the hospital. My children look at him, and they suffer as he is also suffering.”

Over the years Victor has visited all of the area hospitals, which he says at this point turn him away for what little treatment is still available. Now, Estella drives him all the way to the UCHealth Anschutz Medical Center in Aurora whenever he needs help. Without a job and Estella unable to work the necessary amount to qualify for benefits, Victor doesn’t have health insurance. And without legal residency, he has no way of accessing public health care such as Medicaid. But his health is deteriorating. His heart functions at about 10 or 11 percent, he says, adding, “I can only walk about five minutes, and I can’t lift heavy things.”

The doctors say Victor’s only option is a heart transplant to treat his severe condition, a seemingly impossible task considering his undocumented status and current inability to work.

Although his immigration status doesn’t prevent Victor from getting on the heart transplant list, the lack of insurance does.

“There is no law that prevents an undocumented immigrant from receiving a transplant,” says Anne Paschke from the United Network for Organ Sharing (UNOS). “We don’t have any policies restricting that either.”

But, according to Milliman Research, a heart transplant costs approximately $1.4 million, by far the costliest transplant surgery in the U.S., and no transplant center will put Victor on the list without insurance.

As of Nov. 15, there are 3,852 people in the U.S. awaiting hearts of the 114,457 candidates in need of organ transplants. This includes U.S. citizens, residents and others, and although UNOS does not collect data on immigration status, about one percent of all transplant candidates and recipients in the U.S. are non-citizens/non-residents. Forty-six people are currently waiting for heart transplants in Colorado. In 2017, roughly 2,700 people received the surgery, which has a 91 percent survival rate. Although the average wait time for a heart transplant is 191 days, myriad factors come into play and if he’s able to get on the transplant list, Victor could wait much longer for a new heart.

“It’s the responsibility of each transplant center to evaluate a patient and see if they are a good candidate for transplantation,” Paschke says. “They are going to look at everything medically, psycho-social evaluation, and then they’re going to look at compliance history, can you pay for the transplant, and all kinds of factors of your life to make sure that you’d be able to take care of an organ and yourself, that you have people to help take care of you if you were to get an organ.”

Because of provisions in the Affordable Care Act, Victor is able to get private health insurance, which would allow him to get treatment and be put on the heart transplant list. According to Nick Robles, a former neighbor of Victor’s who is trying to help fundraise for the family, a health insurance broker recently told them it would cost between $800 and $1,200 a month, with at least a year-long commitment.

“With the private insurance, I have the possibility to go to University Hospital and get on the waiting list for the transplant,” Victor says. In the meantime, the insurance would also allow Victor to get a heart pump, a device implanted during open heart surgery that will mechanically pump blood through Victor’s body while he awaits a new heart.

Right now, Victor’s father and cousins are helping his family financially, assisting with paying the rent and buying groceries for the girls. Still, coming up with the roughly $10,000 it would cost for private insurance feels almost impossible at this point.

“We’re feeling a little hopeless,” Victor admits, sitting on his couch, clenching his fists, visibly uncomfortable asking for help. “If we were just here, sitting quietly, letting all of this go by, you never know if there’s somebody out there [who can help]. And that’s why we’ve been open about it, rather than just sitting here with our arms crossed.”

The thought of the future obviously distresses Victor, but not for his own sake. It’s the fate of his wife and daughters that troubles him.

With little to no other options, Victor and Estella have resorted to crowdsourcing in the hopes of getting Victor insurance starting in January 2019. For more information about how you can help Victor, visit www.gofundme.com/victor-needs-a-heart-transplant.