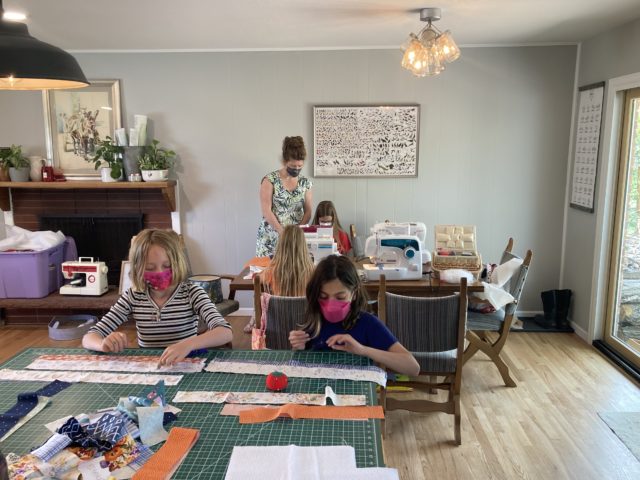 I knock at the Martin Acres house, and Jordan Martindell opens the screen, welcoming me in. Behind her is the kitchen, which blends openly with the living room, and across the countertop reaching into the space like a pier, she’s arranged and folded fabrics in a buffet of colors, patterns, shapes and textures.

On the kitchen table is a sewing machine, and she motions for me to set mine there, an older machine I’d bought off Facebook Marketplace during the first wave of COVID-19 lockdowns, when I contributed to the 850% surge in U.S. Google searches for the term “sewing machines near me.” I wasn’t alone here: Colorado ranked sixth among states with the most searches for that phrase, behind Oregon and Louisiana in the top positions.

“I feel like there’s a resurgence in making in general,” Martindell tells me about 30 minutes into our sewing lesson; we’re bending over my machine, watching me thread the sharp-needle contraption on my own for the first time. “We were so starved for entertainment, we had to create entertainment inside of our house.”

But Martindell went a step beyond, creating an entertainment studio/lab inside her family’s South Boulder home—by the beginning of 2022, she was ready to launch SewBo, an educational sewing space and boutique fabric shop she now runs from the kitchen table, though a brick and mortar store capitalizes next year’s plans. For now, the living room as a business and classroom space is fitting. “The pandemic really blessed society in that way. It helped us reconnect with home in a different way,” she says. “The domestic sphere—we have a different relationship with it now.”

Martindell is a pattern person at heart; she grew up in the South Bay of Los Angeles with a costume designer mom and a community college professor dad. When she left home, she was an aspiring actress headed to New York City; she got a job at Anthropologie to help pay the bills and it was there, tending to intricate retail displays, that she fell in love with fabrics. She was a natural, too—for 10 years, she floated up the company ranks before quitting the big city life and embarking on a mountain-focused journey that landed her in Boulder with her husband and two young children.

Now, with SewBo, she plans to serve Boulder fresh fabrics.

She understands her competition in Boulder is Jo-Ann Fabric and Crafts, but still differentiates that chain as a “need-based store,” as she strives to create an “inspiration-based store” where people not only stop for supplies, but also ideas, encouragement, insights and the spark of creativity. Other sewing and fabric shops in the county, like Lyons Quilting, Studio Bernina and Elfriede’s Fine Fabrics, cater the sewing population with bulk and high-end offerings, and Martindell sees an opportunity to fill in the market with fabrics more resonant with modern projects.

Her other competition, of course, is the internet—an online beast “I can’t compete with,” she admits—but she can, indeed, offer something it can’t: tangibility—the burst of understanding that physical contact or proximity helps release.

I’d tried guiding myself through YouTube tutorials on how to use my machine, but I’d never been able to get the stitches right, nor was I able to understand the whys of what went where. Within 20 minutes at Martindell’s table, it was evident the hours of fidgeting I’d done on my own could be reclassified a waste.

She breaks down steps into bite-sized pieces, motions for me to repeat things over again. I fumble my way through some parts, and she answers my questions with a smile or a funny story. When we get to lining up the fabric to slip under the needle, she says, in response to my doubts that I’d cut wholly symmetrical pieces: “If they’re not perfectly exact, it’s totally fine. What is perfection anyway?” she laughs at herself—knowing exactly who she’s kidding: “I’m raising a perfectionist. I am a perfectionist. My mom is the worst, no wonder. When I’m sewing, I’m like, that’s fine—she’s like, we have to rip it out and start over.” And, true to form, Martindell only encouraged me to rip out one of my seams, when the fabric bunched up and went crooked. We laughed it out, and it was easy to redo. Sewing, she says, has brought layers of joy to her life—she’s excited to spread its benefits far and wide.

Clare Hunter, author of Threads of Life: a History of the World Through the Eye of a Needle, considers sewing’s “social, emotional and political significance.” The calming effects of sewing can help people express and heal themselves, she writes in an article for The Guardian, describing how women in World War II prisoner-of-war camps, “sewed privately, reclaiming solitude and individual expression among the overcrowded and claustrophobic atmosphere of a camp where they were registered as a number. Through their embroidery they made time for themselves and through their sewn autographs they asserted their identity.”

Hunter highlights studies exalting the relationship “between creativity and well-being: [especially] the benefits, particularly for those suffering from mental illness, of the mesmeric immersion in crafts as a relief from inner turmoil.”

In one example, she cites World War I doctors who got “shell-shocked soldiers to embroider as a way of healing mental scars and it proved a surprisingly effective way of steadying their hands and settling their minds.”

Martindell has seen these effects play out before her eyes. “Sewing is a calming antidote—it’s the same for children,” she says. “When they do something like this, their brains aren’t overly stimulated. It’s very simple and so rewarding.”

SewBo’s themed summer camps are for children aged 7 and up. Watching them grow “proud of themselves and feel a sense of accomplishment” is rewarding in itself, Martindell says; she’s watched kids transform over the course of one class—arriving quiet and shy, leaving in smiles with new friends. “Sports gives kids that opportunity. But does it give that to them on an individual basis for anyone to feel that way?”

Martindell teaches adults like me, too, and I have to agree: “Anybody can learn to sew,” she confesses. “It’s the secret secret: sewing is the easiest thing on the planet.”

At the end of our lesson, I’m holding a reversible cloth bag with a crisply boxed bottom—perfect for dressing a potted plant or to use as a cute catch-all for the electronic cords typically bunched on my floor. I text a photo of my handiwork to a friend in another time zone who also picked up sewing during the pandemic and when she alights it with hearts, I feel what Claire Hunter writes, too, how “in our social media age, as we become more physically distanced from each other, sewing is a safeguard to isolation, a way to stay in touch with each other: hand and mind working in harmony to convey what lies in our hearts. For me and others, it sustains not just a sense of self but of belonging.”