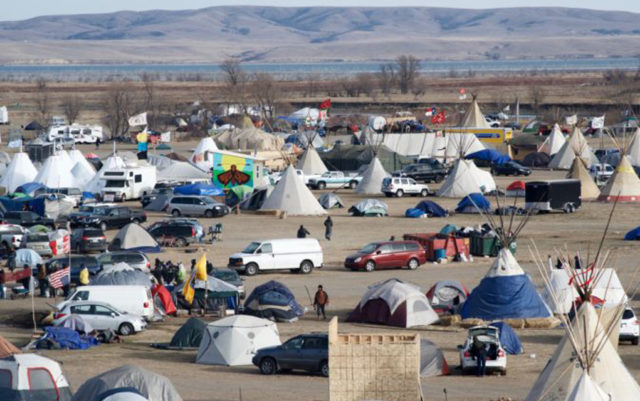 Amid constant coronavirus coverage in the media, it may seem like nothing else is going one. That is, of course, not the case. We went back and gathered some of the biggest stories you may have missed over the last month.

On Monday, March 23, Colorado became the 22nd state to abolish capital punishment as Gov. Jared Polis signed a repeal bill passed by the state legislature in February. At the same time, Polis commuted the sentences of three men on death row: Nathan Dunlap, Sir Mario Owens and Robert Ray, all of whom are now serving life sentences without the possibility of parole instead. The new law doesn’t go into effect until July 1, 2020, however, and there are several pending and potential death penalty cases still making their way throught the courts.

Courts rule in favor of Standing Rock Sioux on DAPL

Almost four years after thousands of people joined the Standing Rock Sioux to protest the Dakota Access Pipeline (DAPL) on the North Dakota plains, a federal court ruled in favor of the tribe on Wednesday, March 25. The District Court for the District of Columbia struck down the Army Corps of Engineers federal permits for the pipeline, stating that the federal agency failed to comply with the National Environmental Protection Act (NEPA).

“After years of commitment to defending our water and earth, we welcome this news of a significant legal win,” Standing Rock Sioux Tribe Chairman Mike Faith said in an Earthjustice press release. “It’s humbling to see how actions we took four years ago to defend our ancestral homeland continue to inspire national conversations about how our choices ultimately affect this planet.”

The judge expressed concerns that the Army Corps of Engineers didn’t give proper consideration to the likelihood of oil spills and their impact, as well as the safety record of Sunoco Logistics, which operates the pipeline. The ruling also requires the Corps to conduct a full Environmental Impact Statement, which it failed to do in 2016 before granting permits for the project. Ultimately, the Standing Rock Sioux hope to shut down the pipeline entirely.

In a major win for immigration activists (which was supported by the Colorado Bar Association), Immigration and Customs Enforcement (ICE) is no longer allowed to arrest people for civil immigration charges in Colorado courthouses, on courthouse property, or while they are coming to or leaving court. It protects defendants, witnesses and victims of crime, and comes in response to increased arrests at courthouses in the wake of the Trump administration’s immigration crackdown. If an arresting ICE agent violates the law, they can either be held in contempt of the court by the judge or face civil charges from the attorney general. ICE maintains it arrests people at the courthouse in the interest of public safety. Gov. Polis signed the bill into law on March 23.

The EPA announced on March 26 that it will not enforce environmental laws, citing the hardships companies in various industries are facing with regards to staffing and oversight of their projects. “The consequences of the pandemic may constrain the ability of regulated entities to perform routine compliance monitoring, integrity testing, sampling, laboratory analysis, training and reporting or certification,” the ruling stated. As a result, the EPA is encouraging companies to “act responsibly” and “identify noncompliance,” but the agency “does not expect to seek penalties for violations.” Though the rule is labeled temporary, there is no end date for the new guidance.

Health care is on the minds of many as COVID-19 sweeps through the community — one thing that would help alleviate some anxiety, though, is access to affordable health insurance. On March 5, the State of Colorado unveiled its public health option, which would substantially limit costs for many Coloradans. The plan as introduced is projected to save Front Range residents 10% or more on premiums, with higher savings for Western Slope residents. Licensed insurance carriers will carry public health option plans in a unique public-private partnership, with plans accessible for individuals initially, and small businesses (those with under 100 employees) ushered in later. The plan will reduce health care costs by requiring insurance carriers to utilize 85% of premium payments for patient care; requiring savings and rebates from drug manufacturers to go to lowering prescription pill costs; and by implementing a hospital-specific reimbursement rate for providers that bases costs on each hospital’s payer base.

The Trump administration issued a final rulemaking that rolls back Obama-era fuel efficiency standards for cars made in the next five years. Obama’s Clean Car Standards, set in 2012, set average greenhouse gas emission benchmarks and were widely adopted by domestic and foreign auto manufacturers. The old standards would have required automakers to increase average fuel economy gradually from 28 miles per gallon in 2020 to 36 miles per gallon by 2025.

The new regs are expected to cause 1.5 billion metric tons of extra greenhouse gas emissions through 2040, according to the Environmental Protection Network (EPN), a nonprofit comprised of former EPA members.

“The Trump administration’s rollback of President Obama’s historic Clean Car Standards is an environmental and economic disaster,” said EPN member Jeff Alson, who served as a senior engineer and policy advisor in the EPA until 2018, in a statement. “The rule will yield a hotter and more dangerous planet for our children and grandchildren, and will transfer money from the pockets of hard-working Americans to oil companies through higher gasoline costs.”