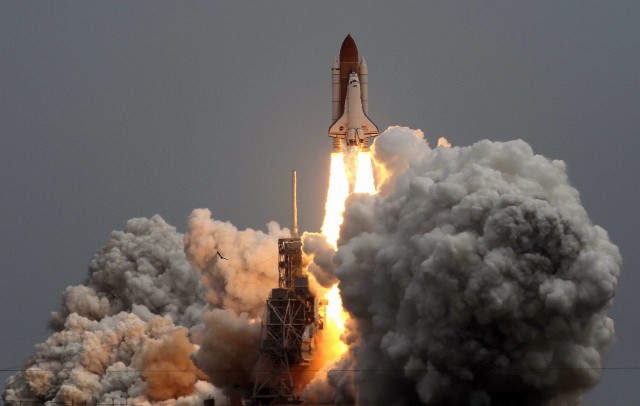 CAPE CANAVERAL, Fla. — Atlantis took off Friday
morning, shooting straight into a brightening sky on its 12-day mission
that marks the end of the nation’s three-decade space shuttle program.

When it returns, Atlantis will join Discovery and
Endeavour as retired vessels. NASA will shift its mission to sending
astronauts to asteroids and Mars while private companies take over the
more mundane aspect of moving cargo and crews from Earth to orbit.

Earlier, the last four astronauts boarded Atlantis
even as possible rain could have delayed the launch. Throughout the
morning, meteorologists gave only a 30 percent chance of the flight
going off as planned at 11:26 EDT.

But optimism has always been part of NASA’s DNA. “We
do have a shot at this today,” launch director Mike Leinbach assured his
team.

Television shots showed Cmdr. Christopher Ferguson
giving a thumbs-up as he was strapped in. The astronauts posed for
pictures before boarding.

In addition to the four crew members — including
mission specialists Rex Walheim and Sandy Magnus and pilot Doug Hurley —
Atlantis carried a year’s worth of supplies for the International Space
Station.

This is the 33rd flight for Atlantis and the 135th shuttle mission overall.

Crowds were large for the final launch, with some
counts putting the number approaching 1 million people, on par with the
crowds that attended the Apollo moon shots. At least 14 members of
Congress were attending the launch. Among the dignitaries was Robert
Crippen, the pilot of the first shuttle launch.

The threat that rain would delay the launch of
Atlantis was doing little to deter the visitors, who were parking on the
sides of roads and filling every hotel room for miles. A 50-mile
traffic jam extending all the way to Orlando was expected.

To space enthusiasts, the outpouring was confirmation
that the federal government may have miscalculated how much public
attention was focused on the space shuttle program, and disappointment
over the plan to suspend U.S. manned launches over the next several
years.

“There is no other government activity where 1
million people come to watch,” said astronaut Chris Hadfield, referring
to a crowd estimate by the Space Coast Office of Tourism. “That’s a
benchmark measure of how people view this.”

Indeed, people who have waited for decades to see a
shuttle launch made long drives to fulfill their dreams. Retired Air
Force Sgt. Fred Lippert, 72, who drove from Kentucky with his wife, knew
he was heading into a traffic nightmare and that rain could postpone
the launch, but he was not concerned.

“I always wanted to see one in person, and now I got my chance,” he said.

About 300 current and former astronauts who have
flown aboard the shuttle made their way to the space center, said former
astronaut Michael “Rich” Clifford, deputy program manager for the
shuttle at Boeing Co.

“We’re going to have a party on the day of the launch,” he said.

Tourism officials said they did not expect the crowds
to lose interest easily. Budget hotel rooms were going for $299 in
nearby Titusville, and charter boats were charging as much as $300 to
take viewers out to sea for the launch, said Rob Varley, executive
director of the Space Coast Office of Tourism.

Tickets to view the launch from inside the space
center were being auctioned on eBay for $500 each on Wednesday and
reportedly had been much higher earlier in the week. The tourism
office’s estimate of 1 million visitors was based on hotel and car
reservations, as well as past launches.

“I have never seen anything like it,” Varley said.

Crowds formed at hobby and souvenir shops, purchasing
polo shirts, baby outfits, virtually anything with a shuttle stamped on
it. At Space Shirts, a retailer down the road from the space center,
people were packed shoulder to shoulder. Eager buyers were waiting in
their cars outside for parking spots in the store’s small lot.

“It’s hard to be prepared for something like this,”
said Brenda Mulberry, owner of the shop, in between swiping credit
cards. “We’ve been busy taking care of people all day here.”

NASA deputy administrator Lori Garver said at a news
conference inside the space center that the end of the shuttle program
would not mean a less ambitious U.S. space program, but instead a future
in which NASA would dedicate itself to the more ambitious goals while
leaving routine space travel to private companies.

The practical result, however, is that NASA will rely on Russia to fly astronauts to the International Space Station.

“The fact that we have to rely on the Russians makes
me ill,” said Titusville Police Chief Tony Bollinger. “Our politicians
have let us down.”