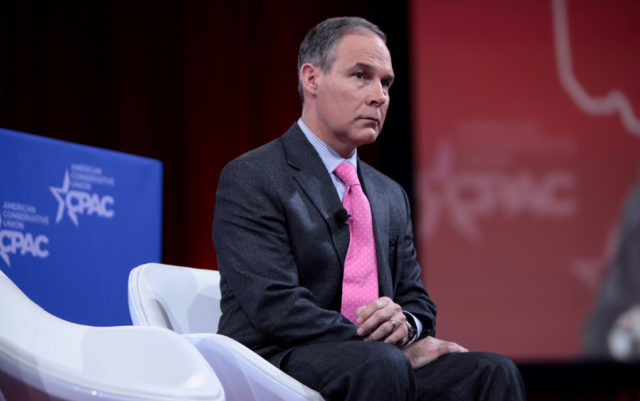 Now, as a coal industry lobbyist, Andrew Wheeler, assumes the EPA’s top position, we’re looking back to see what Pruitt actually accomplished, what the courts blocked him from doing, and what’s been set up for Wheeler to push through in the future.

Note: There are plenty of other “minor” actions, plans and rumors that have been attributed to Pruitt during his tenure that we have not included here.

Pruitt announced in April 2018 the EPA would roll back an Obama administration mandate to put greenhouse gas emission standards on new cars and trucks. The Corporate Average Fuel Economy (CAFE) standards would have set benchmarks for fuel efficiency of new vehicles (about 50 miles per gallon by 2025). Though it was reported in Automotive News that automakers reportedly wanted to amend Obama’s rules so that they could gradually approach 46.8 mpg, Pruitt instead eliminated the standards entirely, put nothing in their place, and put a freeze on enforcing standards until 2026.

The Clean Water Rule was established by the EPA in 2015 and expanded the amount of waterways covered by the Clean Water Act by about 20 million acres. Pruitt said the rule provided uncertainty to farmers and ranchers, as they would have to be held accountable for run-off from their operations into smaller streams that previously weren’t covered. In February 2018 Pruitt pushed enforcement of the rule two years into the future.

An Obama-era rule mandated oil and gas operators had to regularly submit information regarding methane operations. (Methane is a potent greenhouse gas that is a common byproduct of natural gas extraction.) Pruitt, however, trashed the rule.

Chlorpyrfios is a pesticide commonly used on U.S. industrial crop farms. A few years ago EPA found that exposure to chlorpyrifos impacts peoples’ nervous systems, and that it was not worth the risk to allow the pesticide’s use, as it often showed up on food. Obama never banned chlorpyrifos, but there was a plan in place. Pruitt simply dropped the issue.

As one of his final acts at the EPA, Pruitt lifted emissions standards on glider trucks, which are greenhouse-gas-emitting large trucks that don’t have engines or transmissions, and so aren’t subject to certain pollution laws. Pruitt decided not to close a loophole introduced by the Obama EPA that would’ve applied standards to these glider trucks.

The Obama administration required chemical plants to declare the chemicals they stored, and their quantities. It came in response to an explosion at a fertilizer plant in West, Texas, which killed 15 people. Pruitt decided to suspend those rules until at least 2019.

Advocated to leave Paris Climate Accord

Calling it a “bad deal,” this was one of the first things Pruitt did during the first few months of his tenure. By June 2017, Trump had announced the U.S. was leaving the deal.

Reduced EPA budget to lowest since 1990

Pruitt operated with one of the lowest EPA budgets in the last three decades. The EPA received a 30-percent cut from its 2017 budget, making it the lowest since 1990.

The signature piece of Obama’s environmental policy was supposed to be the Clean Power Plan, which sought a one-third reduction in carbon emissions from U.S. energy suppliers by 2030. Pruitt sued Obama in 2016, when he served as the Oklahoma Attorney General. The lawsuit held up the implementation of the plan, and both Trump and Pruitt announced they would dismantle the plan’s key tenets. Nothing has been made final.

An appeals court ruled that Pruitt and the EPA could not extend a moratorium on oil and gas methane emission standards, citing the agency’s decision was “unreasonable” and “arbitrary.” The court ruled the Clean Air Act prevented the EPA from extending the moratorium.

The EPA boasted it could save the electric utility sector $100 million per year by reducing regulations on the disposal of coal ash. Coal ash is a known harmful pollutant that can infiltrate drinking water. The plan is in limbo.

One such study concerned contaminated water supplies near military bases and chemical plants in the northeast. The study found levels of a particular contaminant should be seven to 10 times lower than the current EPA level, and Politico first reported on emails that suggested the administration was attempting to stifle the study’s release.

Lead paint’s not good for humans. The Obama administration tried to enact new standards in 2011, but failed, and when Pruitt took over at the EPA, he tried to push regulations six years into the future, but a court said no.

A court also ruled that Pruitt’s EPA must comply with a mandate to recognize and remedy areas that do not meet ozone standards. Ozone is known to have health effects on humans, particularly children and the elderly, and those with respiratory problems.

Pruitt also incurred more than a dozen ethics inquiries into his operations during his time at the EPA. Here’s a quick list of some of what’s being investigated.

• Pruitt paid $50 per night to live in a condo co-owned by an energy lobbyist’s wife.

• He had an all-hours security team that cost the EPA about $3.5 million in his first year.

• He flew first class at taxpayer’s expense for his first year in office.

• He used at least four email addresses, according to the New York Times, and the EPA inspector general is investigating if that was meant to circumvent public records requests.

• Though not being investigated, he told an aide to look into getting his wife a Chick-fil-A franchise.

Many have argued that Pruitt acted with such haste to strip environmental regulations that many of his efforts will get struck down in court. Indeed, some of his efforts have already been nullified. And, the early consensus seems to be the new EPA chief will be more effective than Pruitt at destroying environmental regulations, mostly because he won’t get mired in so many controversies.

Still, we can look at Pruitt as the bellwether for what’s to come.

A study in the Journal of the American Medical Association by David Cutler and Francesca Dominici estimated the “Trump environmental agenda is likely to cost the lives of over 80,000 U.S. residents per decade and lead to respiratory problems for many more than one million people.”

Too, Pruitt’s tenure has altered the way EPA staff and researchers work in the agency. David Coursen, who worked in the EPA’s office of general counsel for 25 years, says the culture change Pruitt brought will have lasting impacts.

“Pruitt’s real legacy has been his relentless attacks on EPA and the value of its work, almost as if cutting regulations is a good in itself, while ignoring the enormous benefits of EPA regulation in making our nation’s air safe for children to breathe and our water safe to drink,” he says. “I know that anti-EPA rhetoric has been a staple on the right for many years, but it seems different — a watershed moment, if you will — and much more destructive when it is coming from inside the agency.”