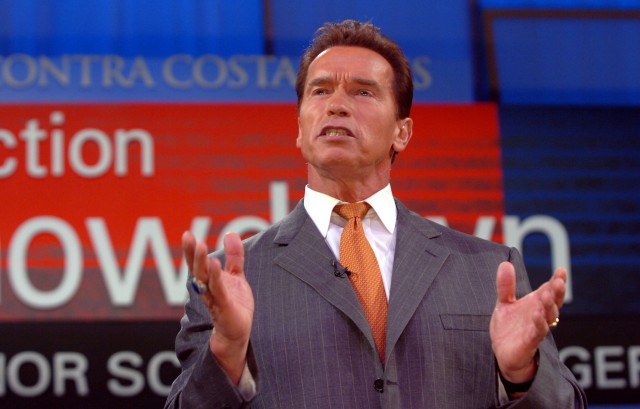 — Gov. withdrew his support Monday for a new oil drilling project off the coast in the wake of a massive oil spill in the .

The Republican governor for two years had pushed the project as a way to raise money for strapped budget.

In his January plan, Schwarzenegger projected an advance of and then over 14 years by allowing -based , or PXP, to drill into waters from an existing oil platform in federal territory.

He had a change of heart over the weekend.

“I see on TV the birds drenched in oil, the
fishermen out of work, the massive oil slick destroying our precious
ecosystem,” Schwarzenegger said at a wildfire preparedness event at
McClellan airfield. “It will not happen here in , and this is why I’m withdrawing my support for the T-Ridge project.”

The governor had proposed using proceeds from oil
drilling to pay for the California State Parks budget. He suggested
Monday the state would try to find that money elsewhere.

has maintained a four-decade moratorium on new offshore oil drilling in state waters.

PXP in 2008 reached agreement with some environmentalists to drill in waters at in exchange for agreeing to shut off other platforms after nine years and the platform after 14 years. PXP also agreed to donate land and money toward environmental efforts.

, chief counsel of Environmental Defense
Center, which negotiated the agreement, said her group was “mystified”
by the governor’s reversal. She said the deal would have prevented oil
spills by removing existing platforms from federal waters.

But major environmental groups opposed the plan.
They questioned whether the PXP deal was enforceable and feared it
would set a new precedent for oil drilling in waters.

“ is glad to see a high-ranking public official recognizing the danger of our addiction to fossil fuels,” said of Sierra Club California in a statement. “It’s too bad that it takes a
tragedy of this scale to convince drilling supporters to change their
ways.”

The three-member , which reviews new oil leases, rejected the proposal last year, with a lone vote of support from a Schwarzenegger appointee.

At the time, Democrat was still on the commission by virtue of serving as lieutenant governor. He has since left for and was replaced last week by Republican , who said he would be willing to review the project despite his past opposition to offshore oil drilling.

“I think that we all go through the endless amount
of studies and research and everything, and before you make a decision
like that, you are convinced that this will be safe,” Schwarzenegger
said. “But then again, you know, you see that, you turn on television
and see this enormous disaster and you say to yourself, why would we
want to take that risk?”