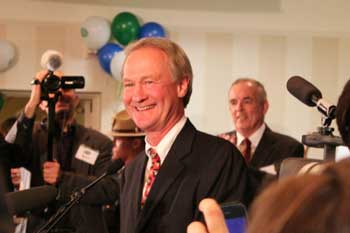 Rhode Island Gov. Lincoln Chafee, a former Republican, has announced he is switching his party affiliation from independent to Democratic, Chafee’s office has confirmed.

Chafee, struggling with low approval ratings, will face a difficult re-election campaign, Politico reports, although the governor’s office says the decision to join the Democrats is not a political one designed to help Chafee’s re-election.

Chafee spoke at the Democratic National Convention in 2012, when he was an independent. President Barack Obama issued a statement embracing Chafee and welcoming him to the party.

See the story at Politico.