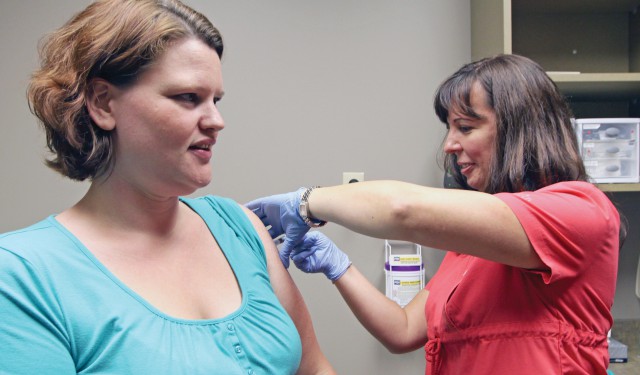 WASHINGTON — Despite a rising nationwide toll of sickness
caused by the H1N1 flu virus and an intensive push by the government to have
people vaccinated for it, almost half of Americans say they aren’t likely to
get the vaccine, according to a new McClatchy-Ipsos poll.

The McClatchy-Ipsos poll also found rising opposition to the
health care overhaul legislation that’s before Congress. Some 49 percent of
Americans now oppose it — up 7 points from October — while only 39 percent said
they supported it. The poll had an error margin of 2.98 percentage points.

The surprising finding of widespread resistance to the swine
flu vaccine comes as the illness continues to spread and a growing number of
Americans say they’re concerned about it: 63 percent now versus 51 percent last
spring.

Nearly 25,000 people have contracted the flu so far in the
United States, and 114 children have died from it.

Federal health officials are striving to assure Americans
that the vaccine is safe, through constant appearances in the news media and on
the Web site www.flu.gov. This week, for
example, they said the vaccine had been subjected to rigorous safety tests and
clinical trials and that it posed no more risk than an ordinary seasonal flu
vaccine did.

“This vaccine is made exactly the same way as we make
seasonal flu every year, with decades of good safety experience,” Dr.
Anthony Fauci, the director of the National Institute of Allergy and Infectious
Diseases, said Tuesday on CBS.

Health officials are urging the people most at risk —
children, pregnant women and health workers — to get vaccinated first.

Many who want the vaccine have been frustrated by long lines
and delays, however, as the government says it’s received about only 30 million
doses, 50 million short of what it had projected it would have by this time.
Production was slower than expected.

“I fully understand how frustrated people are and,
frankly, how anxious a lot of parents are about getting this vaccine in a
timely fashion,” Health and Human Services Secretary Kathleen Sebelius
said Monday.

“What I can tell you is that production numbers are up.
We got 9 million new doses last week. We will have 10 million total new doses
this week. That’s good news.”

If people are skeptical about the vaccine or put off by
delays in its availability, most of them aren’t blaming the Obama
administration. Two out of three, 65 percent, said they were confident that the
administration had done everything in its power to make the vaccine available
in time.

The views of the Obama administration’s handling of the
vaccine have partisan undercurrents.

Democrats were the most confident: Eighty-two percent gave
thumbs up to the government and 16 percent said they didn’t have confidence.

Independents were next, expressing confidence in the
government by 56-36 percent.

Republicans were the most divided, split evenly 49-49 on the
administration’s handling of the vaccine.

On the broader question of overhauling health care, the
rising opposition shows that Democrats are increasingly isolated on the
question. In a sign of potential political trouble, independents oppose the
plan by 53-29 percent. Most Democrats support it; most Republicans oppose it.

Despite the plurality of opposition to the overall proposal,
Americans favor creating a public health-insurance program to compete with
private insurers by 51-43 percent.

They support creating nongovernment insurance cooperatives
by a larger margin of 57-35 percent.

They also support proposals to assure patients’ rights, such
as mandating that insurance be portable from job to job, by 75-17 percent.