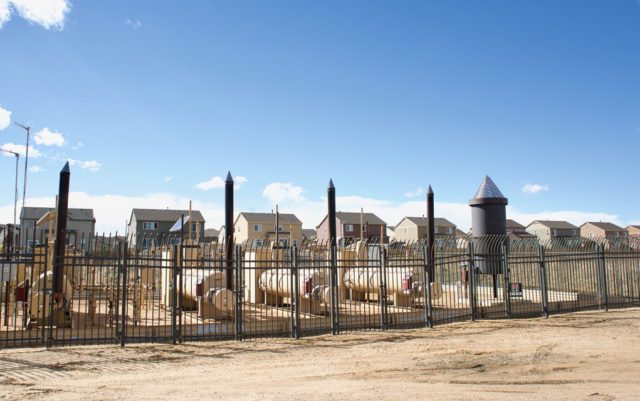 Phillip Doe is a former environmental compliance officer and head of the Reclamation Law Administration for the U.S. Bureau of Reclamation. He currently serves as the environmental director for Be the Change Colorado.

The cause of all the mindless helter skelter was the release of a CDPHE report first commissioned by former Governor John Hickenlooper on the potential for benzene poisoning in the fracking fields of Colorado. As many will remember, Hicklooper held fast to the claim that fracking was safe, even as he sleep-walked through his aborted run for president. He must have thought this study would prove him right. It didn’t.

When commissioned back in 2014, citizens and grassroots groups raised objections to the study format. The industry would partner in the study and gather air pollution data. In other words, the polluters would help measure their own pollution. Academics from Colorado State, a university with close ties to the industry, would use highly suspect methodologies to interpret the chemical characteristics of the pollution from the wells. Independent scientists insisted the results, by design, would under-measure the actual air pollution, particularly benzene. Benzene is a known carcinogen, unsafe to humans at any concentration.

What could go wrong? Well, there was one miscalculation: the fracking lovers didn’t control the simulation model into which the suspect data would be fed. And what a miscalculation it was. The old scientific formulation of garbage in, garbage out didn’t quite hold up. The simulation model, even with suspect data, showed fracking was sometimes spewing benzene like late-night tweets from Donald Trump.

Polis’ lieutenants were quick to tamp down concerns. In a press conference they declared themselves on top of it — they had things under control. Mostly they had it wrong. Fearing continued civil disruptions because of the lack of progress in implementing the new law, SB 181, the public was not allowed to attend the press gathering. SB 181 is supposed to have turned the tables on the oil industry in this state. No longer is the State to prostitute itself for the industry; instead, the State is now supposed to ensure the public and the environment are protected as a condition precedent to new oil development. At least, that was the promise.

Colorado Oil and Gas Conservation Commission Director Jeff Robbins announced the study showed a risk of benzene poisoning during the early stages of the fracking process called flowback. During the flowback phase at least half of the chemical mix used to frack the formation and force oil to the surface under tremendous pressure returns to the drill site. Presently, given the length of the one-mile-plus laterals, maybe half of the roughly 10 million gallons of water mixed with 100,000 gallons of chemicals used to frack the formation can be expected to stream to the surface along with the first rush of oil and gas, including benzene.

Robbins claims the study showed health threatening benzene contamination as far away as 2,000 feet from the drill site only during the flowback phase. Thus, he says, the risks were short-term. As a consequence of the study, he is going to evaluate all new permits for their potential for harm out to 2,000 feet. He will also continue to use the 1,500-foot standard he established, by fiat, in May to evaluate for potential harm. How he is to match the competing standards is a magic trick apparently known only to him. At least the Hickenlooper safe-standard of 500 feet has vanished from the conversation like the morning dew.

The fact of the matter is that graphs from the study show harmful benzene concentrations can be expected, under the simulation model, well beyond 2,000 feet, perhaps for many miles. Such a finding is consistent with actual measurements from the Boulder County Air Monitoring Station. Recently this station, the only continuous air monitoring station in the state, measured a huge spike in benzene that correlated well with a major gas leak at a frack site near Windsor. The station is 40 miles from the Windsor location, a drill site that eventually erupted into a major explosion and fire requiring all regional fire departments to engage at the site.

Senator Steve Fenberg, one of the sponsors of SB 181, is now calling for an immediate end to all permitting within 2,000 feet of human habitation. Had the state not misinformed the public concerning the study results, Fenberg’s request would be a rational and laudable reaction. However, Fenberg is acting on bad information. The model was programmed to only measure benzene to 2,000 feet. That is a far cry from saying the study showed benzene risks disappeared after 2,000 feet. Simply put, the Polis administration’s complicity in disguising the potential health impacts that could and should be derived from the study is immoral and possibly even criminal.

Similarly, the administration’s insistence that there are no expected long-term impacts from benzene poisoning such as cancer is without foundation. The study relied on snapshots of individual wells, not continuous monitoring as required by SB 181. It is well-documented that air pollution from wells is not constant, but varies depending on the operation. With the industry participating in this study’s pollution-gathering phase, one would expect the snapshots to be taken when releases to the atmosphere were minimal, as opposed to times when flaring or venting of gasses into the atmosphere were operationally called for or state sanctioned and permitted. New studies indicate that even atmospheric conditions can influence the leak rate at oil and gas facilities. Only continuous monitoring can capture all the variances.

Thousands of people living near fracking in the state have reported nosebleeds, trouble breathing, rashes and eye irritations. The study, despite its limits, confirms these reactions are likely from benzene poisoning. Yet the State would have us believe there are no long-term impacts because a few indeterminate snapshots of operational well releases following the flowback phase allow them to basically lie, and in so doing, cause unknown levels of harm to Colorado citizens.

Indeed, the Fracking Compendium, which Colorado continues to blindly ignore in its health assessment of fracking, indicates that of the nearly 1,800 original research papers on fracking and shale oil and gas extraction, over 80% of those studies published before 2016 found harm or potential harm from fracking. That percentage has only increased in recent years with over 90% of the original studies published after 2016 finding “a positive association with harm or potential harm.”

To give some life to these deadly statistics, it is perhaps beneficial to note a few of the findings among these studies:

• High benzene levels were detected in urine samples of pad workers during flowback.

• Young people with lymphocytic leukemia were 4.3 times more likely to have lived near oil and gas operations.

It’s pretty obvious what’s not being done and probably won’t be done since Robbins is of the opinion that permits already approved — over 1,700 of them since Jan. 1 — can’t be recalled or reviewed. In his opinion, the mineral owners have sacred vested property rights that we the sovereigns of this state can’t diminish or impair. We apparently have a duty to die from benzene or other poisons if we happen to live near the fracking fields. Not only does this opinion show that protecting public health and the environment is not the primary goal in this administration’s regulatory considerations, as required by SB 181 and the Bill of Rights, but that Robbins is probably not a very good lawyer. The U.S. Supreme Court has always ruled the public’s safety and health are a higher social good than property rights. Moreover, the State Supreme Court has ruled similarly, as it must, of course, that the State can override vested rights provided the decision is consistent with a legitimate government interest. The protection of the public’s health and safety as demanded by SB 181 probably suffices.

What should be done? Obviously a complete halt to new drilling must be invoked until real-time monitoring can be accomplished.

A test continuous-monitoring system should be employed immediately as required by SB 181. The monitoring program should employe new laser technology. This technology is not dependent on wind direction or other weather conditions. A system being used in California at refineries can measure with great accuracy up to 70 chemical constituents and be made available to interested governments almost immediately.

Continuous monitoring should be undertaken at both a new site about to be fracked and several operational sites.

All drill sites should be well away from human habitation. Measurements should be continuous from the minute the drill bit goes into the ground until the operational phase is well underway.

Continuous monitoring should be done at several test sites, with  selection of those sites done with the advice and consent of those living in the fracking fields. The data for the simulation model for benzene poisoning was from individual wells, on pads as small as one acre. This is atypical of Front Range drilling, where up to 40 wells on a pad of 10 to 15 acres is the rule. The test sites should be at these industrial mega-sites, where some have speculated the amount of air pollution may rival those at the Suncor refinery in Commerce City. Feeding this fear is the fact the State asks for no control on emissions until at least 90 days after the well becomes operational. In other words, they intentionally skip monitoring the flowback stage. The State promises to correct this insane loophole under SB 181 rulemaking. We’ll see.

It would be interesting to see this real-time data fed back into the simulation model for comparative purposes, but also to track potential pollution to its outer limits, not an arbitrary 2,000 feet that is clearly protective of the industry’s financial interests.

Finally, we would all be thankful if the governor would stop making statements such as the one he made before oil executives a few weeks back. He is reported to have said that events in oil-rich Venezuela and Russia will have more impact on the frackers’ future in Colorado than SB 181. In his opinion, he told those assembled, “Commodities pricing and the market is what drives things.”

These can’t be the words of a serious mind that got elected by vowing to regulate the industry and protect the people. He never hinted that he’d let Wall Street do it.