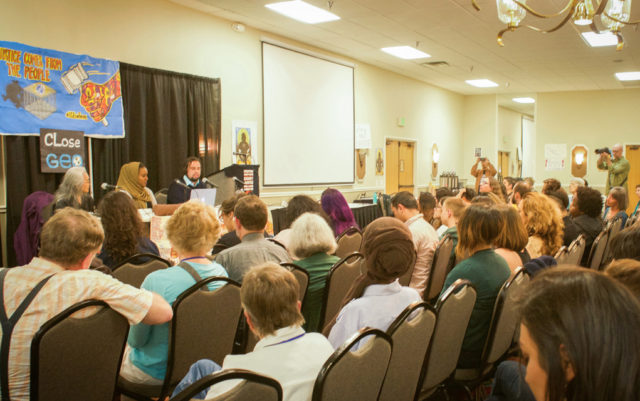 It wasn’t a real courtroom, but the 200-plus people in attendance took the final verdict seriously. When the word “guilty” finally rang out, it was quickly followed by shouts of approval and thunderous applause.

Call it a fake trial, a tribunal, a protest, whatever you want, in the end the stories of alleged wrongdoing on the part of U.S. Immigration and Customs Enforcement (ICE) and GEO Group — the private corporation that owns the 1,500-bed immigration detention center in Aurora — seemed to deserve the sentence, even if it carried no punishment.

The tribunal was one of 10 such people’s courts conducted around the country and came at the end of a three-day gathering put on by Detention Watch Network, a national coalition of immigrant advocacy groups.

Members of the three-judge panel that rendered the verdict were also the primary presenters of the evidence against ICE and the private prison… make that detention center. Together, the accused use their power and walls to hold primarily people who have committed no crime other than trying to enter the United States without proper documentation in an effort to better the lives of their families or escape the harm or even death that awaits them in their home countries should they be forced to return.

All three members of the judges’ panel had recently made trips to the facility to visit detainees.

Marge Tanawaki told the audience that the conditions described to her by a man from Cameroon reminded her of what she had experienced as a child when she moved into a Japanese internment camp during World War II. Based on her description, her detention then and that of those being held in Aurora now seem to stem from the same brand of unfounded fear. Tanawaki said the man described poor medical care, inadequate and unhealthy food and lights being left on all night, making sleep more a dream than a reality.

Many a book and research paper has been written about the conflicting priorities of private prisons and detention centers. Think of it this way: every dollar spent on health care is a dollar less profit to the shareholders. Every dollar saved on food and its preparation is another dollar made. One private prison in Texas was caught feeding a square green food cube of some sort to inmates three times a day every day to increase profits. This abuse was only discovered after a violent riot broke out over the Soylent Green scenario.

In addition, research has found that the goal in privatized prisons and detention centers isn’t to quickly process and release detainees. Corporations make roughly $40,000 a year off of each one of them. There’s no incentive to see such an annuity walk out the front gate.

In short, the longer the stay, the poorer the health care provided, the worse the quality and quantity of food served, the higher the profits. It’s a system built for abuse, and who better to abuse than a migrant thousands of miles away from friends and family with no money, knowledge or other means to fight the system — and in a country that is increasingly hostile to such folks anyway. It’s a perfect storm of exploitation.

Vinnie Cervantes, a local Latino activist, was also on the judges’ panel. He explained how he had recently visited a man in the detention center who had made it all the way to the U.S. from El Salvador with his 21-year-old son. The man told Cervantes the two had applied for asylum as soon as they crossed the border, explaining the violence and danger that would await them if they were returned to the gang-controlled streets and neighborhoods of El Salvador.

ICE’s response? They shipped the son to a detention facility in the state of Washington and the father to California and then on to the Aurora facility. Like the man from Cameroon, the father complained about food and health care, telling Cervantes he had been served spoiled milk for breakfast and nearly raw chicken for dinner, and then added he wasn’t getting adequate treatment for his polio while being forced to work for a dollar an hour in order not to lose privileges such as watching TV.

The third member of the panel was immigrant rights activist Alewia Roba, who had recently met a detainee who had been released from the facility only to find himself lost and confused. The man, also from Cameroon, had been moved to Colorado from another state and was turned onto the streets with no money, local contacts or any idea where he would sleep or how he would eat. It’s something that happens every day.

Just to add insult to injury, the phone system in the Aurora facility is also privatized to another corporation that, according to those with knowledge of the system, charges exorbitant prices (as much as $15 per call). This means some detainees aren’t even able to afford to call their families to tell them they are being detained by ICE, let alone in what state they are being held.

According to Jordan Garcia, organizing director at American Friends Service Committee, the real purpose and power of the people’s tribunal is as a tool of persuasion. He told BW that his hope is that places where city councils and county commissioners are being convinced that having private immigration detention centers are a good idea will start to understand that it’s far more trouble than it’s worth, and that they are better served finding alternatives to detention.

Garcia says there are many viable alternatives to detention that are better for both the detained immigrants and everyone else because they waste far fewer tax dollars while providing something more closely resembling justice.

The verdict is in according to this people’s court: $40K in taxpayer funding per person per year is far too much to waste for the privilege of abusing people whose only crime is seeking a better, safer life for themselves and their families; in other words, pursuing the American Dream.