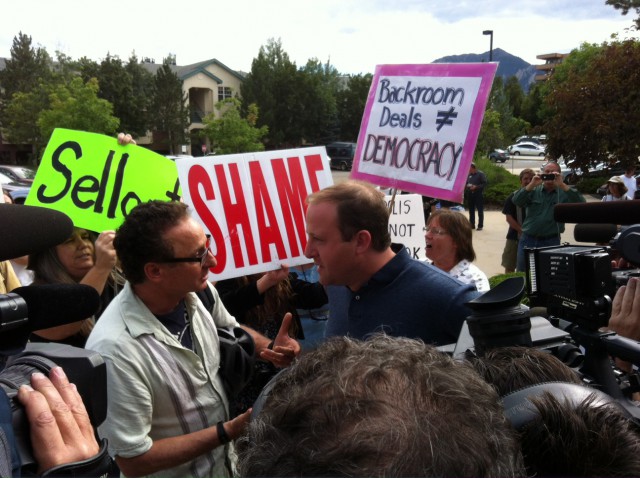 This
year, hundreds of thousands of Coloradans signed petitions to create
ballot initiatives that asked for more local control over the oil and
gas development happening near their homes, schools and businesses as
well as increased setbacks. Then came the now infamous offer of support
followed by the grand compromise aka the “let’s use my anti-fracking
ballot measures instead of your already existing ones” from Rep. Jared
Polis, who authored and funded his own initiatives so he had the power
to rescind them at the last hour, supposedly in exchange for a task
force on oil and gas appointed by Governor John Hickenlooper, along with
a few other nearly meaningless concessions.

Instead
of letting the people have a voice with the initiatives at the ballot
box, the “compromise” — made between one known supporter of the oil and
gas industry and one who seems increasingly to lean that way — called
for the creation of a task force that would draw from every side of the
fracking issue in an effort to find common ground and in theory create
legislative suggestions.

“This
is one of the most important issues I’ve ever worked on,” Hickenlooper
said during the news conference announcing the task force. “We have two
self-interests in conflict, and I think most of us would say both of
them have good arguments on their side, so then the challenge becomes
how do we sit down and work through to mitigate the conflict as much as
possible?”

Hickenlooper has described how there was a “communal sigh of relief, when we negotiated this commission.”

“We
certainly don’t want it on a ballot initiative where no matter what
happens the state loses tremendously,” Hickenlooper told the audience
during a debate with his gubernatorial challenger, Bob Beauprez, in
Grand Junction. “Look at the level of risk on that.”

On
Aug. 4, Hickenlooper announced the members of his task force intended
to step in and be the voice of the people and industry when oil and gas
development occurs near homes, schools, businesses and recreational
areas. Yes, that was a “when,” not an “if.”

As
for Polis, on Aug. 4 he reacted to the creation of the task force by
saying, “Today’s announcement is a victory for the people of Colorado
and the movement to enact sensible fracking regulations. For the first
time, citizens will be on equal footing to the oil and gas industry, and
able to negotiate directly for regulations that protect property
rights, home values, clean water and air quality. I am pleased that we
were able to come together, and today’s agreement is meaningful progress
toward sensible fracking regulations.”

That
would be great if it were true. It appears that now that the taskforce
members have been announced, Polis’ optimism is as misplaced as the
trust of the citizens in his ballot measures. A quick look at
Hickenlooper’s task force participants should dispel any notion that
this latest compromise is anything more than just the latest political
attempt to allow the oil and gas industry to carry on its business as
usual in Colorado.

The
group is stacked with people whose stances range from “our communities
deserve a little protection from the wells in their back yards, so let’s
do a better job of capturing methane from oil and gas wells” to an oil
and gas executive who has used a glass of fracking fluid to toast the
process as the greatest invention of all time. And the majority of the
task force, 12 appointees, are financial contributors to the Democratic
Party.

Not one of the members of the task force, based on Boulder Weekly’s
research, is an advocate for a ban or moratorium on fracking — even
though that’s exactly what citizens in communities up and down the Front
Range have been asking for by way of their votes and what a coalition
of almost 300 organizations from across the country, Americans Against
Fracking, is calling for.

“Anyone
who has ever negotiated, whether it’s for a used car or something as
important as this, knows if your position isn’t represented at the
table, you can be certain that it’s not going to be a possibility in one
of the outcomes,” says Sam Schabacker, Western Region director for Food
and Water Watch, which organized the coalition.