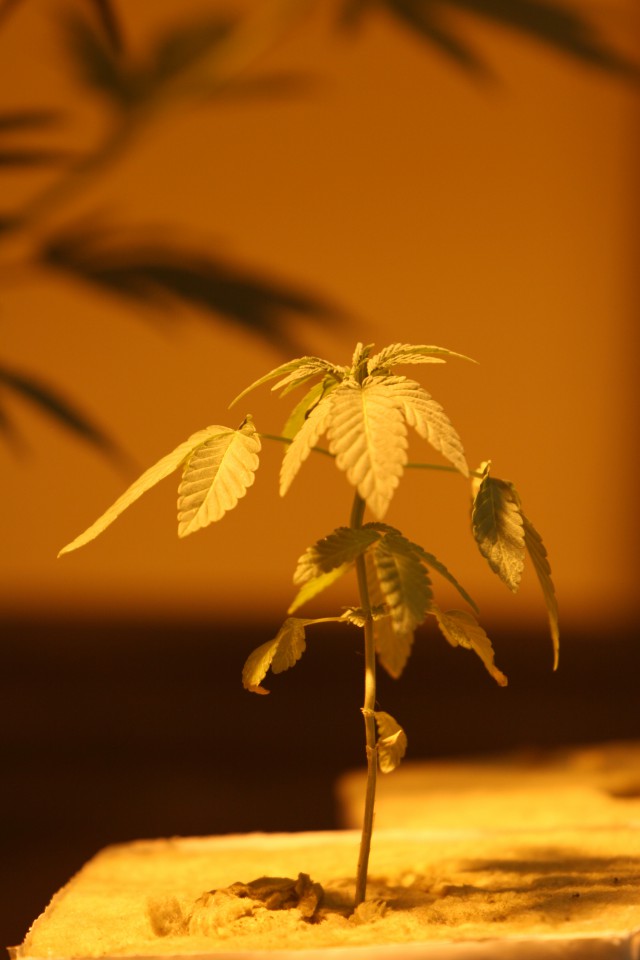 Lauve believes it was his highly publicized connection to
marijuana that led to him being fired from his job, being evicted from his
Louisville home and receiving a visit from Social Services.

“It was a polite way of
discriminating against a handicapped person,” he says.

On Aug. 6, a jury acquitted Lauve of felony charges related
to having too much marijuana in his possession — more than the six plants
allowed by Amendment 20. He consumes large amounts of marijuana in his food to
alleviate pain stemming from an accident he suffered more than four years ago
when a snowboarder slammed into him at Eldora Mountain Resort.

He claims that the day he was acquitted, he got an e-mail
from Jenny Stevenson, a vice president at the Rocky Mountain College of Art and
Design in Denver, where Lauve was an instructor. In the e-mail, Lauve says,
Stevenson told him she had something to talk to him about, and he didn’t think
much of it until he got a second e-mail saying he was being fired. He requested
a meeting with Stevenson, the college president and Dan Seely, his department
chair. Instead, he says, he got a meeting with human resources Director Nicole
Tefft and Stevenson, who reportedly told him, “You have a history.” They wouldn’t answer his questions, Lauve says, and when he pulled
out a copy of a front-page newspaper story about his marijuana case and asked
them if his firing was related to that, they barely glanced at the article and
denied it. The fact that they didn’t bother to read what the story was about
proves they knew about his case, he says.

Lauve maintains that he always got positive evaluations in
his six years as an instructor at the college, but he acknowledges that he
often had to arrive late or leave early due to his pain — especially before he
began using marijuana instead of other pain relievers such as morphine,
oxycodone and vicodin, all of which had side effects like depression and
drowsiness.

Representatives from the college, including Tefft, declined
to comment on Lauve’s firing, citing it as a personnel matter. Stevenson, who
no longer works at the college, also declined to comment.

Seely, the department chair who served as Lauve’s boss, says
that while he was disappointed at not being consulted about the firing, he has
no evidence that it was due to Lauve’s use of marijuana. Seely, whose contract
with the college was recently terminated, says the school was under new
leadership and shifting from a liberal academic institution to a proprietary
trade-school model, which may have played a role in the personnel changes. He
says he never talked with Stevenson about Lauve’s marijuana use, although they
had spoken about Stevenson’s belief that Lauve was not fulfilling his
obligations as an instructor because of issues like tardiness and missed staff
meetings.

Seely admits that the college was “not as supportive as it
should have been” in dealing with Lauve’s disability, and he does not rule out
the possibility that the marijuana issue could have been the straw that broke
the camel’s back.

“It’s hard to know what was in Jenny’s mind,” Seely says, “but the timing
might have been enough, if she did know about it, to go ahead and make her do
it.”

Seely adds that Lauve has been feeling suspicious toward others, “so I
can understand why he would say that.”

Lauve also claims that his landlord, Vithal Patel, tried to
evict him because of his use of medical marijuana.

Lauve says he had a great
relationship with Patel until his jury trial, after which communication with
the landlord got spotty and Patel attempted to change his rental terms from
month-to-month to a longer-term lease.

According to Lauve, Patel forged a lease
by changing the date on a previous version, claimed that the lease had expired,
tried to raise the rent and accused Lauve of not paying his rent for December. Lauve told Boulder Weekly that he sent Patel a second rent check for December, but
was served with eviction papers anyway.

The two went to court and worked the matter out using a
mediator, and Lauve was given permission to stay until April 1, paying the same
rent.

Reached by phone, Patel would only say that he took Lauve to
court because he was not paying his rent, and that he had been advised by his
attorney to not discuss the matter further.

In addition, Lauve claims that Boulder County Social
Services paid him a visit in part because of his marijuana use. There was also
a complaint that he was verbally abusing his 9-year-old son, Lauve says, but
after looking into the matter, the Social Services worker was understanding and
supportive of his cannabis use and affirmed that his son was lying about the
abuse because he was angry with his father.

Now Lauve has started a publication, Cannabis Health News
Magazine, which he says is for patients, by patients and not just about
marijuana, but overall health and well-being.

“The media portrays us as having our hats on backwards and
our pants down to our knees,” he says. “But the average age of medical
marijuana users is 47.”

Lauve says he would welcome more regulations and guidelines
for the growing industry, but it should come from the patients and caregivers.
One issue, he says, is that some doctors may be writing marijuana
recommendations for those who don’t really need it.

“This is not a medical
marijuana problem,” Lauve explains. “This is a doctor problem.”