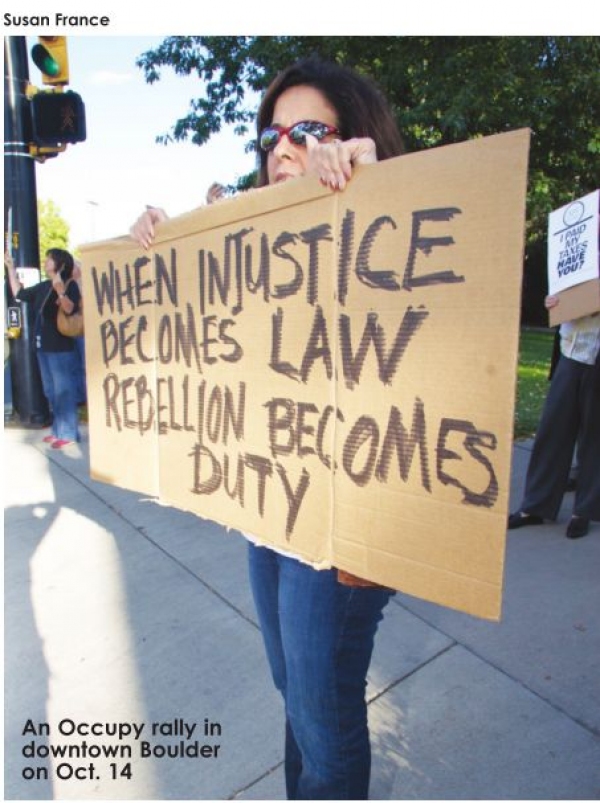 A Boulder mother who has been active in the local “Occupy” movement says the recent crackdowns on similar demonstrations in cities across the country are likely part of a federally coordinated attack on the movement.

Fiore Grey, who, like other Occupy participants, shies away from labels such as “spokesperson” or even “member,” describes herself as being active on several Occupy Boulder working groups. She says crackdowns in cities like Philadelphia, Oakland, Los Angeles, New York and even Denver are connected.

In response to a question about who is behind the attacks, she says, “I have some suspicions, but really how far do we want to go down the rabbit hole of all of that?” Grey says one Occupy activist in Riverside, Calif., saw Homeland Security officials show up at one protest.

“And personally, I don’t think that this defense bill … is a coincidence,” she adds. “At a time you have a major outcry of public anger and frustration with the status quo and people speaking out against it, it doesn’t seem like coincidence that they’d also be trying to pass this bill that basically allows them to infringe on people’s fundamental rights to peaceably assemble, freedom of speech and not be held without charge.

“I wouldn’t be surprised if it was the FBI or NSA or any of those groups, but I don’t know.”

She says the 10 to 20 people who continue to brave cold temperatures occupying a spot on the Pearl Street Mall overnight are taking shifts sleeping so that someone is always on watch for cops and other threats.

“If you’re found sleeping, you can be ticketed,” Grey says, referring to the city’s anti-camping ordinance, which has been added to Occupy Boulder’s shit list.

While Occupy Boulder’s general assembly initially wanted to take a break over the winter, a small group vehemently insisted on camping through the season. Grey acknowledges, “How can we call ourselves Occupy Boulder without having an occupation?” She downplays the role of left-wing leaders in the Occupy movement nationally, saying that the action enjoys a broad base of support that crosses all political lines and includes Libertarians and Tea Partiers.

“I think the partisan issue is a distraction to what is going on, and an attempt to divide and conquer, and it’s not going to work,” Grey says, calling it an ethical, not partisan, movement. “Anyone who wants to co-opt the movement should feel free to co-opt it. … I would say it’s left, right or whatever. You have people who have been systematically segregated who are talking to each other now.”

She agrees that there is definitely a communal nature to the movement, but she stops short of calling it communist. Still, she acknowledges that the Occupy theme of equally distributing wealth is a noble one.

“The system makes people feel like they’re alone, and they’re not,” Grey says.

And when asked about the historical precedents for the movement, she replies, “Every struggle for freedom

underlines this. Look at history as a teacher of what works and what doesn’t.”

Specifically, Grey cites the end of the 19th century, when, like today, the largest corporation was an oil company (Standard Oil) and there was unprecedented labor organizing around issues like the 40-hour work week and child labor. She even goes back to the American Revolution as an example, saying that the colonists were sick of oppression and corruption by a monarchy and corporate interests.

As for the media’s portrayal of the Occupy movement as scattered and unfocused, Grey says that was likely prompted by financial donations from the likes of Republican hedge fund manager Paul Singer.

“The media can’t not cover it at this point,” she says, adding that the movement may seem scattered because it’s about a broad array of issues.

“That’s how real discussion ceases, when you pick one issue,%u2