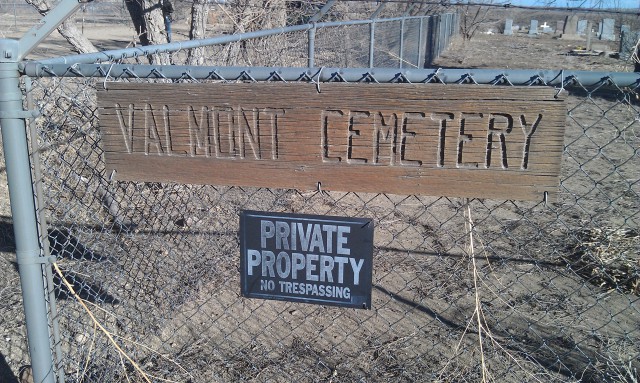 A Boulder environmental attorney says the city of Boulder and/or Boulder County could be held liable if the historic Valmont Cemetery is contaminated as a result of the current remediation effort at the butte.

And he doesn’t rule out the possibility that the site is already contaminated. After all, it’s unlikely that lead pollution would be stopped by the chain-link fence surrounding the property.

The Valmont School District No.4 Cemetery Association is being represented by Randall Weiner, the lawyer who in 1999 helped about 300 residents of the Denver suburb Globeville win a settlement in a class-action lawsuit against a smelting plant accused of contaminating the area with lead and other heavy metals.

Weiner wrote a letter to the county commissioners on June 27, prior to the commissioners’ approval of the city’s remediation plan for the site (the property, while owned by the city, is in unincorporated Boulder County and has not been annexed by the city of Boulder). Weiner asked that city and county staff meet with cemetery representatives and address their concerns about contamination on the gravesites, cross-contamination and unmarked burial sites.

“The cemetery is one of the few places on Valmont Butte which receives significant public travel,” he writes. “Valmont Cemetery is still an active private cemetery where only pioneer families associated with the Valmont School District may be buried.”

Weiner says in the letter that areas west of the cemetery show significant lead contamination, up to 1,200 ppm, and are “a likely source of windborne contamination of the cemetery.” (He notes that in Globeville, the state required cleanup for lead when it exceeded 500 ppm, and many scientists insisted on a 100 ppm threshold.)

“Throughout this entire process, no attempt was made by the government personnel or their consultants to reach out to the cemetery representatives to attempt to meet their concerns,” Weiner writes. “As a city representative stated to me this morning, the city ‘didn’t have a responsibility to’ consult with them. The county can and should rectify this for two reasons, a moral one, and a legal one: First, the city appropriately consulted with Native American interests concerning cultural artifacts and other issues as part of the remediation investigation. The representatives of Valmont’s early pioneers deserve no less consideration. Their cultural artifacts (gravesites, etc.) are as meaningful and important to the history of the area as those of Native Americans.

“Second, it is likely that the cemetery is as contaminated as the surrounding areas, and that it will be impacted by the remediation occurring to the north and west of the cemetery,” Weiner continues. “The cemetery has a legally protected interest in its land, and, in addition to those parties responsible for the contamination, the city and/or county could be liable if they cause the cemetery to become contaminated as part of the remediation process and those conducting remedial operations. … “A little outreach and effort on the part of the county at this point would go a long way towards minimizing the risk of future conflicts, and protecting an important part of its heritage.”

City officials have repeatedly claimed that there’s no evidence that contamination has left the property. But it’s hard to find evidence on the other side of a chain-link fence if you haven’t bothered to test. (City officials didn’t respond to questions about liability for cemetery contamination and clean-up by press time.)