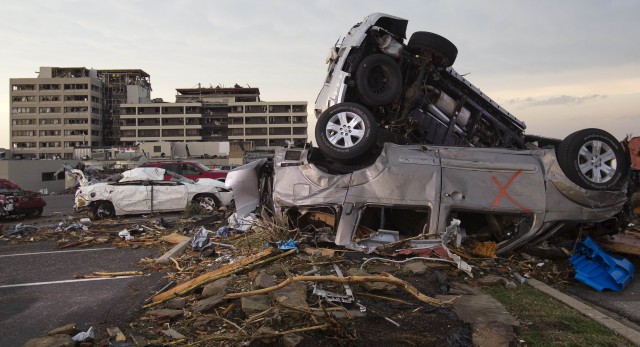 But there was some good news, City Manager Mark Rohr said: Rescuers pulled seven people from the debris Monday.

The rescue effort will continue through the night.

“We’re going to cover every foot of this town to make
sure every person here, who was here, is accounted for,” Gov. Jay Nixon
said. “…There are still lives out there that need to be saved.”

The tornado, estimated to be an EF4 by the National
Weather Service, tore a six-mile-long path from one-half to
three-quarters of a mile wide through the middle of Joplin on Sunday.
Much of the city’s south side was leveled, with churches, schools,
businesses and homes reduced to ruins by winds estimated as high as 190
to 198 mph. Officials have estimated 2,000 buildings were damaged.

Rescuers have made three sweeps, block by block, in
their search for survivors. Authorities have not released names or other
details of the victims.

“There are going to be some things out there that are hard to see and hard to stomach,” Nixon said.

The harsh images will stick in people’s minds.

Not just the denuded trees, or the buildings twisted
or turned to rubble, or the cars blown with such horrendous force that
they were literally heaped and fused together like sculpture.

It’s the faces of people, loved ones and strangers.

Like that of the 5-year-old boy found dead and
crumpled beneath the tangle of steel and mountain of bricks that was
once Joplin High School. The boy’s mother cried in grief when she heard.

At another makeshift unit at a Lowe’s home
improvement store, wooden planks served as beds. Outside, ambulances and
fire trucks waited for calls. In the early hours of the morning,
emergency vehicles were scrambling nearly every two minutes.

After daybreak, survivors picked through the rubble
of their homes, salvaging clothes, furniture, family photos and
financial records, the air pungent with the smell of gas and smoking
embers. Some neighborhoods were completely flattened and the leaves
stripped from trees, giving the landscape an apocalyptic aura. In others
where structures still stood, families found their belongings jumbled
as if someone had picked up their homes and shaken them.

Some looting was reported.

Outside McAuley Catholic High School, which had been
turned into an impromptu triage center, Carolene Coleman, 70, dropped
her head. Her voice quavered. Her eyes pooled with tears as she sat
scraped and bruised in a wheelchair, her ankle bandaged.

All they were doing, Coleman said, was stopping for a
drink at the Elk’s Lodge. Then the twister roared and ripped. There was
no basement; nowhere was safe.

“The roof collapsed on everybody,” she said. She was
crushed. Her husband, Clyde, 74, lay on top of her, his body still, for
nearly six hours. They were married for 54 years. Everyone was
screaming, “Help! Help us!”

She knew the truth.

The goal was to find anyone still alive under the debris.

As they went inside building shells with their axes
and flashlights, peeking under collapsed walls and roofs, residents and
their families were sifting through what’s left.

“My sister lived here,” says Cara Creasy, standing on
piles of debris a block down from Main Street. “She has four dogs and
they all made it.”

Her sister, Ashley Hailey, was at a cousin’s wedding
in Galena, Kan., when the tornado hit. When she arrived home, three of
her dogs were sitting on top of debris.

Monday morning, friends and family helped Ashley find
her fourth dog, Vader, a lab mix. He was underneath the kitchen stove
which was covered by toppled trees and collapsed walls.

Other neighbors were looking for pets and what they could salvage.

When the tornado struck, Katie Thrasher, 25, was in a
bar, the Sportsmans Park. She had just gotten off work at the AT&T
telephone store where, normally, she closed up on Sunday. But this day, a
co-worker, a friend of hers closed the store. Katie’s home across from
Joplin High was flattened, directly in the tornados path. Nothing exists
but rubble and the concrete skirt to her driveway.

While she was hiding safely in the walk-in cooler at
the bar, the tornado blasted the AT&T store into steel and broken
wood. Thrasher’s friend, the one who’d stayed to close the store, died
in the storm.

The only image that Deidre Wessman, 49, wants to
remember is that of her son, 12-year-old Chance Hamilton, running out of
their house, after the storm, in search of his neighborhood friends.
Once finding them, embracing in the middle of the street.

“That’s what I want to remember. That sight,” she
said of the boys hugging, smiling as if they hadn’t seen each other in
100 years.

The neighborhood had been all but crushed. An
80-foot-tall sycamore tree, ripped from its roots, lay across the road.
Massive branches were tossed and scattered onto roofs and porches and on
top of cars as if kicked by the toe of a giant.

Wessman and Chance and his father, Johnny Wessman,
49, escaped the storm in a fallout shelter, dug nearly 10 feet into the
ground under a heavy steel trap door in the floor of their home. Even at
that depth deep, Johnny Wessman could feel and hear the walls of the
house expand and contract above them. The air was sucked from their
lungs. Their ears popped as the tornado roared overhead.

Then it was over.

The Wessmans made their way out of their hole. Johnny
Wessman walked a few blocks south toward Cunningham Park. He saw the
twister’s toll. Cars crushed from spinning like tumbleweed over the
ground. Houses obliterated. Trees stripped bare and ragged. Some say
would say it’s like a bomb dropped, but more it’s more like 1,000 bombs,
or an atomic blast.

The first body he found was a woman with a metal rod driven through her head. A man’s body lay nearby.

“I thought we had it bad until I saw those bodies,”
Wessman said of the tornado and destruction to this house. “You can
always replace this (stuff), but you can’t replace a human being.”

Across the park, the tall empty hulk of St. John’s
Hospital stood in the distance: its windows blown out; its floor black
and empty, like an image from Beirut.

As search and rescue crews went building to building
along Main Street, 6-year-old Dallas Lee watched her mom Trista go
through her dad’s Ford F-150 looking for his wallet.

“My sister has a big gash on her forehead,” Dallas
says, as she stands in a light rain, the hood of a pink sweatshirt
covering in head. “And my brother has a big gash in his leg. … My
dad’s in the hospital too.”

Five members of the Lee family rode out the storm in
the bed of their pickup. It’s now a crumbled and twisted like a tin can,
the windshield shattered the doors bent in.

They were trying to get to a church, where they heard there was shelter, but the church was locked.

“We didn’t know where the other shelters were,” Trista said. “I told my husband the safest place to be is at home.”

Before they could get there, the winds picked up their truck and slammed it to the ground.

Sirens gave residents about a 20-minute warning
before the tornado touched down on the city’s west side, Rohr said.
Staff at St. John’s Regional Medical Center hustled patients into
hallways before the storm struck the nine-story building, blowing out
hundreds of windows and leaving the facility useless.

The hospital was among the worst-hit locations. Early
Monday, floodlights from a temporary triage facility lit what remained
of the building that once held as many 367 patients. Police officers
could be seen combing the surrounding area for bodies.

In the parking lot, a helicopter lay crushed on its
side, its rotors torn apart and windows smashed. Nearby, a pile of cars
lay crumpled into a single mass of twisted metal. Winds from the storm
carried debris up to 60 miles away, with medical records, X-rays,
insulation and other items falling to the ground in Greene County, said
Larry Woods, assistant director of the Springfield-Greene County Office
of Emergency Management.

The Joplin twister was one of 68 reported tornadoes
across seven Midwest states over the weekend, according to the National
Weather Service’s Storm Prediction Center. One person was killed in
Minneapolis. But the devastation in Missouri was the worst, eerily
reminiscent of the tornadoes that killed more than 300 people across the
South last month.

Travel through and around Joplin was difficult, with
Interstate 44 shut down and streets clogged with emergency vehicles,
debris and fallen trees.

Emergency management officials rushed heavy equipment
to Joplin to clear the way for search and recovery operations. Nixon
declared a state of emergency, and President Barack Obama said the
Federal Emergency Management Agency was working with state and local
agencies.

About 1,500 volunteers showed up Monday morning at
Missouri Southern State University to help with the tornado response,
said Gary Burton, a former state lawmaker who went to the campus to add a
friend’s construction equipment to the list.

An aching helplessness settled over many residents, who could only wonder about the fate of loved ones.

Justin Gibson, 30, huddled with three relatives
outside the tangled debris of a Home Depot. He pointed to a black pickup
that had been tossed into the store’s ruins and said it belonged to his
roommate’s brother, who was last seen in the store with his two young
daughters.

Gibson, who has three children of his own, said his
home was leveled and “everything in that neighborhood is gone. The high
school, the churches, the grocery store. I can’t get ahold of my ex-wife
to see how my kids are.”

“I don’t know the extent of this yet,” he said, “but I know I’ll have friends and family dead.”

Visit The Star Web edition on the World Wide Web at http://www.kcstar.com/