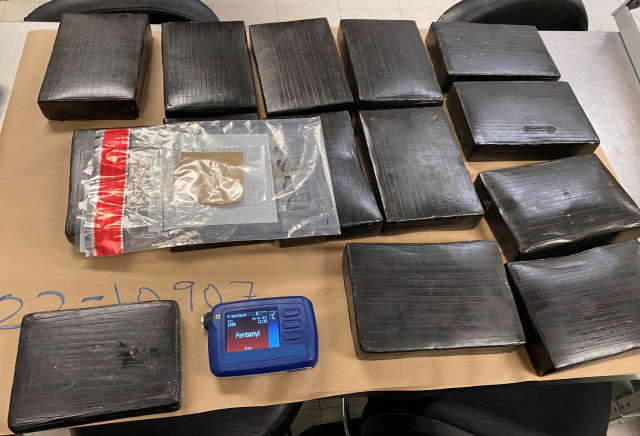 Hidden in a pill or powder, only 2 milligrams of fentanyl is considered a potentially lethal dose. That’s the weight of a typical mosquito.

Nick Goldberger has 12 years of experience with the Boulder County Drug Task Force. In 2020, he started to see the consequences of more fentanyl entering the county.

“If you do not get a drug from a pharmacist, you’re taking a chance,” says Goldenberger. “You’re making a bad choice because there are pills out there that will kill you, and they have [killed].”

There were seven accidental fentanyl deaths in 2021, according to the Boulder County Coroner’s Office. Goldenberger says the drug task force has 20 active investigations, and most of them are fentanyl-related deaths.

On Dec. 2, law enforcement seized almost 45 pounds of a fentanyl and cocaine mixture in Longmont. Alberto Reyes-Carrillo, who has ties with the Sinaloa Cartel, was arrested and is being held on a $500,000 bond.

The U.S. Drug Enforcement Administration says one kilogram (equal to two pounds) of fentanyl has the potential to kill 500,000 people.

According to Goldenberger, most of the fentanyl coming to this area is from Mexico. He’s glad to see nearly 50 pounds of fentanyl mixture off the streets.

“That amount of fentanyl, whether it’s straight fentanyl or fentanyl mixture will — it’s not a could — will kill people,” he says. “It would have killed people, I don’t know a number, but one is already too many.”

Fentanyl is cheaper, creates more powerful highs and drives greater addiction and more purchases. Goldenberger compares pills laced with fentanyl to chocolate chip cookies — once the ingredients are all combined and put on a baking sheet, some cookies have more chocolate chips than others, the same way some fentanyl-laced pills have more fentanyl than others.

“When you get any of the cookies with more chocolate chips, which equates to a pill that has more than two milligrams of fentanyl, somebody’s probably going to die,” Goldenberger says.

District Attorney Michael Dougherty says the amount of fentanyl seized in Longmont was unusually large for Boulder County, because packages of that size often get broken up before reaching the Denver metro area.

“It’s my hope that law enforcement taking this off the streets is going to put a dent in how much fentanyl is coming into this community,” Dougherty says. “However, to be realistic, that’s just short term. And long term, we have a lot of work to do to help people who are struggling with addiction, and to get more programs for treatment and harm reduction in place.”

Now, Dougherty is focused on both the prosecution of Reyes-Carrillo, and the ongoing investigation to learn more about where he was coming from and where he was heading.

If convicted, Dougherty says Reyes-Carrillo faces a “very lengthy” state prison sentence. His court process is now underway, and he will have a hearing in the coming weeks.

More resources are now going toward fighting the fentanyl crisis in Boulder County and the state.

Since October of this year, Goldenberger says the County’s drug task force has been using the Overdose Mapping and Application Program, or ODMAP, a website that gives real-time data on overdoses and deaths. Before ODMAP, the task force sometimes had to wait six months or even a year for up-to-date data to inform decision making.

As of Nov. 29, law enforcement agencies across the state can now apply for funding through the state’s Synthetic Opiate Poisoning Investigation and Distribution Interdiction Grant Program, which has $6.9 million available to help investigate fentanyl death, injury and distribution.

“[The grant program] is a really comprehensive approach to helping our community survive the fentanyl crisis,” Dougherty says. “It’s not something we’re going to simply incarcerate our way out of — that would be a mistake.”