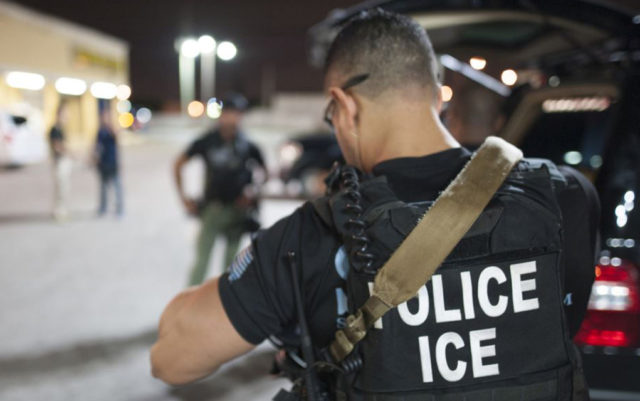 Most nights, Ana Rodriguez wakes up in a panic; she consistently dreams U.S. Immigration and Customs Enforcement (ICE) officers are knocking on her door. As an undocumented immigrant who was brought to the U.S. as a child, Rodriguez has spent the last several months constantly battling fear and anxiety about her future as federal immigration policies have shifted under President Trump’s administration. She worries about running into ICE officers, who could question her immigration status and threaten the life she’s made in the U.S.

And she’s not alone. Throughout immigrant populations in Colorado and around the country, anti-immigration rhetoric, along with reports of increased immigration raids, arrests and deportations have sparked widespread fear, anxiety and often panic. Advocates report increased stress, isolation, hopelessness and depression within the communities they serve, as people are increasingly afraid to seek supportive and mental health services in order to cope.

“We are literally in fight or flight mode,” says Rodriguez, a community organizer with the Colorado People’s Alliance and a recipient of the federal Deferred Action for Childhood Arrivals (DACA) program.

These fears are not necessarily unwarranted. Since the presidential inauguration in January, there have been weekly reports of people being deported after check-ins at ICE offices, leaving courtrooms and at their homes. The administration has made it clear that anyone who is in the country without proper documentation, even those with DACA status, are at risk.

In the first 100 days of Trump’s presidency, ICE reported a nearly 40 percent increase in arrests compared to the same period in 2016, averaging more than 400 arrests per day around the country.

In the agency’s Denver area of responsibility, which includes Colorado and Wyoming, there was a 21 percent increase in total number of arrests, including a significant increase in arrests of people without a criminal background. In the first three months of 2016, there were 28 non-criminal arrests by ICE. In 2017, there were 134. Furthermore, within the Denver area of responsibility, there was a 145 percent increase in deportations between 2016 and 2017 — 323 compared to 793.

And while ICE officials argue they are following the president’s directives in accordance with the law, these policies are leaving many communities around the country and in Colorado in a constant state of stress and uncertainty, afraid that no matter what they do, their lives could change at any moment.

“I’m increasingly realizing how unprotected the entire undocumented community is under this new administration,” Rodriguez says.

In Boulder County, advocacy groups, community leaders and mental health providers have seen firsthand how these shifting policies affect the health and wellbeing of immigrant populations.

“I can say anecdotally that I have definitely had more conversations about the political situation and policies than ever before in these last few months,” says Marja Dansie, a behavioral health provider at Clinica Family Health, which runs several federally qualified health centers serving people based on low-income qualifications around Boulder County. “I can attest to there being a general widespread unease, fear, concern, anxiety for all types of reasons, whether it be access to healthcare, concerns about friends, colleagues, family members, people who have various identities, people of color. When there has been persecutory rhetoric with this administration, people have felt personally threatened or persecuted.”

It’s difficult to back up these claims, as health providers often don’t track immigration status and can’t make any correlation between immigration status and mental health services. Still, Dansie says people come to Clinica with myriad concerns, without specifically asking for mental health help. They may be meeting with doctors to discuss other health issues but also share they are having a difficult time sleeping or they’re angry, scared and hopeless, which is where behavioral health comes in.

At El Centro AMISTAD, a nonprofit immigrant advocacy organization based in Boulder, Executive Director Jorge De Santiago says he saw a shift within the first two weeks following the 2016 election, fielding multiple calls a day from worried families about their legal statuses. Whereas before AMISTAD focused its advocacy around wellness, health and education in the Latino community, since November their work has become “more interventionist,” De Santiago says.

“The only thing that we can actually do is try to listen to them, try to understand and manage in a way that validates what is happening, provide the right information and be realistic about what they can actually do, in terms of when something like this (detention or deportation) happens to them,” he says.

The advocates at AMISTAD also try and connect people to community services that can help, including mental health professionals at both Clinica and Mental Health Partners (MHP). De Santiago spends a lot of time explaining patient confidentiality, reassuring people that health providers do not share patient information with ICE. However, the response is often a mistrust in any sort of formal institution.

“The challenging part has still been with seeing Mental Health Partners as a government entity, as someone that they cannot trust,” he says. “They know that when they go to Mental Health, their information is going to be living on a system somewhere, where a lot of people can have access.”

Regardless, people “feel rejected and afraid and not secure in their own houses,” says Elena Aranda, the executive director of the Programa Compañeras at El Centro AMISTAD and a bilingual therapist of more than 20 years with the Community Infant Program at MHP. She spends her week traveling around Boulder County conducting home visits within the Latino community and says everyone she talks to is experiencing some level of stress given how the national immigration policies have shifted with the new administration.

“In my case load, it’s everybody,” Aranda says. “Even the people who are documented, they feel the discrimination. We look the same, those with documentation or no documentation. Even my son was asking me if he had to have his ID all the time and he’s a citizen.”

This stress can result in other health concerns and a general decrease in wellbeing and quality of life that threatens the very fabric of immigrant communities. The numbers at the weekly Compañeras meetings, which are meant as a community support system for Spanish-speaking women to share experiences, have decreased as people are more and more afraid to leave their home, drive and seek services.

“Fear and stress leads to depression and isolation,” Aranda says. “They don’t go to community resources for help because they are afraid to use their names,” she says. “If they are worried about their normal life, they’re not going to be present. … They are just going to be constantly thinking about these issues.”

“When we’re stressed,” Dansie explains, “our autonomic nervous system is what is activated and that then triggers our amygdala to activate, and when our amygdala is active our frontal lobe isn’t working. And our frontal lobe is where memory, concentration, focus and all that stuff is located. Chronic stress does fundamentally affect a person’s ability to learn new things, concentrate, remember things, be rational, think clearly.”

Furthermore, many immigrants have already experienced significant trauma — adverse and dangerous conditions that either caused them to flee their home countries or that they experienced on their migrant journey to the U.S. and afterward. Couple that with a daily deluge of media reports about increased ICE activity and many people are being re-traumatized, Dansie says.

“If you think about the typical picture of someone who has PTSD, like a soldier who has gone to war, and if they were to watch scenes of war over and over again it would just destroy their nervous system and any ability they would have to cope,” Dansie says. “And similarly if there’s this insecurity and stress right now, then they see it over and over again on the news, it’s feeding into that trauma and fear in the same kind of way. … That feeling threatened or [living] in fear really does take a toll on a person’s wellbeing and physical health.”

But there is hope.

At the same time advocates are reporting increased fear and anxiety, they also speak about increased resilience, solidarity and cooperation within the immigrant communities and their allies.

“This is a really dangerous period of discrimination,” Aranda says. “But it’s also an opportunity for us to empower each other, to be together and develop resilience. I see a lot of solidarity in the community.”

On June 15, Rodriguez and other advocates from a dozen or so organizations including the Colorado Immigrant Rights Coalition (CIRC), Mi Familia Vota (MFV), Together Colorado, American Friends Service Committee (AFSC), United for a New Economy (UNE), and SEIU, Local 105, among others, launched the Colorado Rapid Response Network and 24-hour hotline to help spread accurate and documented information about ICE activity throughout Colorado.

The network is designed to take tips about ICE activity through the hotline, then dispatch trained volunteers, some of whom are certified by the National Lawyers Guild as legal observers, to confirm such activity, document any civil or human rights abuses and, if necessary, alert the public response teams. These teams are prepared to coordinate legal assistance and media outreach, among other resources.

“I wanted to be a part of something that was actually supporting our community to take action to at least document what was going on … not sweeping that under the rug,” Rodriguez says. “It’s a really empowering thing for me as an undocumented person to be a part of coalitions and networks that are doing something to resist the huge deportation machine.”

The network also hopes to prevent the spread of misinformation that has often occurred within immigrant communities since the election. In Boulder County, there have been a series of false rumors about immigration raids at different apartment complexes and even some schools that have quickly spread throughout the community causing fear and panic.

“A lot of what we’re experiencing right now is that people think that something is a raid and it’s actually not. People see a drunk driving checkpoint and then they think it’s a raid and they get panicked then they spread panic,” says Jordan Garcia, immigrant program director for immigrant ally organizing at AFSC. “We want to be able to give our community accurate information about what’s going on.”

“The moment somebody that’s trying to be helpful posts a picture on Facebook … or there starts to be a chain of comments through neighbors… that automatically sends our communities into a tailspin of fear,” Rodriguez adds. “Having this hotline will definitely help make sure that folks are reporting incidences so they know that somebody is doing something about it.”

There are currently more than 100 volunteers committed to the hotline and rapid response network, with training events for legal observers and dispatchers scheduled in the coming weeks. And it’s not only empowering immigrants, it’s a significant way allies, who can often times more easily approach and interact with law enforcement officers, can become involved.

“For the immigrant community, it’s been really cool to watch them see allies come out of the woodwork and be willing to take on some of these responsibilities,” Garcia says. “And then that also helps them feel not as isolated and not so alone.”