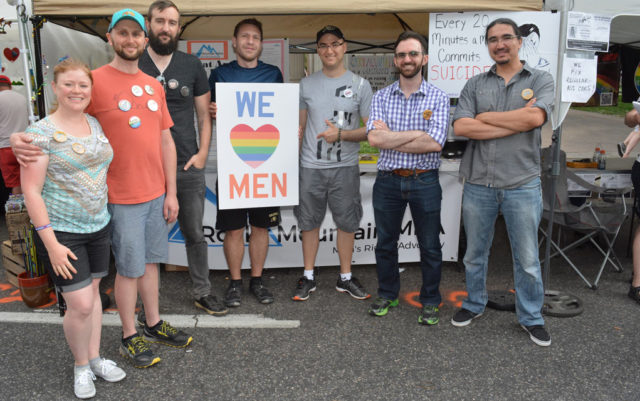 Matt, a Boulder nutritionist and herbalist, had been looking forward to attending his first Denver PrideFest as an openly gay man. In particular, he was excited to volunteer at Rocky Mountain Men’s Rights Advocacy’s (RMMRA) exhibition booth to talk to people about issues disproportionately impacting men, such as drug addiction, incarceration, suicide and other matters close to his heart.

Rex Fuller, vice president of communications and corporate giving for the GLBT Community Center of Colorado, which puts on PrideFest, sent an April 11 email to RMMRA explaining that the group wouldn’t be allowed to return for its second year because “the Men’s Rights Movement, also known as the male supremacy movement, has been portrayed by the Southern Poverty Law Center as a hate movement.”

Fuller also mentioned the group’s 2016 screening of The Red Pill, a documentary about the men’s rights movement, and an opinion piece posted on the RMMRA Facebook page from the Daily Caller (a conservative website co-founded by Fox News’ Tucker Carlson), as reasons for rejecting their application.

According to the email, PrideFest’s issue with The Red Pill was that the filmmaker, Cassie Jaye, had included interview segments with Paul Elam, founder of the men’s rights publication A Voice for Men, who Fuller says has elsewhere made negative statements about women that many find offensive.

“[P]ussy is the only real empowerment women will ever know,” Elam said in a 2017 YouTube video entitled Sex Robots: Part 3 – Disempowering Pussy. “[I]t is men, and pretty much men only, who draw power from accomplishment, who invent technology, build nations, cure disease, create empires and generally advance civilization. Women, whether acknowledging it makes us feel warm and fuzzy or not, depend on men for all of that and the only tool they have at their disposal to have any sort of influence on any of it is the power of pussy and pussy is powerful indeed.”

PrideFest’s beef with the Daily Caller post on RMMRA’s Facebook page wasn’t the content, per se — it was an opinion piece about divorce written by a woman — but the fact that the publication itself has a “reputation for promoting anti-LGBT and racist news items.”

For instance, Southern Poverty Law Center cites the Daily Caller’s publication of opinion pieces from anti-immigration columnist and former Forbes editor Peter Brimelow, who the organization calls a “white nationalist.” The New York Times has also published an opinion piece from Brimelow and he has been interviewed by media outlets ranging from C-SPAN to Slate Magazine.

While RMMRA assured organizers that it fully supported PrideFest’s non-discrimination policy, Fuller wrote that the above instances and “association with this movement suggest[ed] otherwise.”

“I was really quite baffled by their reasoning,” Matt says in a phone interview with Boulder Weekly. He was so miffed by the denial that he sent a personal email to PrideFest organizers detailing his distress. Though he didn’t receive a reply, RMMRA was refunded its $55 application fee.

“It’s not that we did anything,” Matt says. “It’s that we had watched a movie that had someone who [said] something else, somewhere else. It’s that we posted an opinion article about men’s experience with marriage, but it was from the ‘wrong’ source.”

Southern Poverty Law Center’s recent classification of “male supremacy” as a “hateful ideology” was a major factor in the PrideFest decision, which Fuller’s email to RMMRA indicated was synonymous with men’s rights.

However, Heidi Beirich, director of Southern Poverty Law Center’s Intelligence Project, says in an email to Boulder Weekly that, “we do not consider all men’s rights groups hate groups.”

“The Southern Poverty Law Center listed two male supremacy groups to the hate list for the first time in 2017 because the vilification of women by these groups makes them no different than other hate groups that malign an entire class of people,” Beirich says.

The groups are Elam’s A Voice for Men and Return of Kings, a website run by “pickup artist” Roosh V., the latter of whom does not identify as an MRA (men’s rights activist).

Yet Fuller maintains that the decision to ban RMMRA was not made “arbitrarily.” In an email to Boulder Weekly, he says PrideFest had many internal discussions on the topic, including with lesbians and trans men and women, all of whom “uniformly agreed” that the group didn’t meet the standards of the non-discrimination policy.

While acknowledging that RMMRA members insist they don’t discriminate against anyone, Fuller counters that “members of MRA groups around the country regularly say hateful and awful things about women and speak out against women’s rights.”

On April 2, prior to rejecting the application, PrideFest operations manager Carol Hiller sent an email to RMMRA president and co-founder Aaron Mello, saying, “Many men’s rights groups have gone on record saying things such as ‘Transgender women are not real women.’ Can you please comment on this statement? It is in direct violation of Denver PrideFest’s non-discrimination policy in regards to gender identity and expression.”

Lexie, a Denver-based RMMRA board member who is a transgender woman and “pretty left wing,” says she was “kind of amused” when she first learned about this, not having heard of any prominent men’s rights activist saying such a thing.

“I think there’s a lot of misinformation about the men’s rights movement out there that’s sort of tarnished the reputation,” she says, while acknowledging that some men’s rights activists have said some “provocative and inflammatory” things, both seriously and satirically.

Though Lexie understands why some people might be turned off by aspects of the men’s rights movement, she points out that RMMRA is a “local group, we’re not really part of the larger MRA movement. We just sort of do our own thing in Colorado.”

“We support equality and equal rights, we want men and women to be treated the same for the same actions,” she says. “It’s very much just male positivity… we’re very against the idea of male supremacy.”

Kat, also an RMMRA board member and Denverite, points out that, to the contrary, women are “held up as shining examples of leaders” of the men’s rights movement, naming The Red Pill director Cassie Jaye, Christina Hoff Sommers, author of The War Against Boys, and YouTuber Karen Straughan.

A cisgender woman, Kat believes PrideFest organizers are “basing their decision on a lot of guilt by association, and not even direct association.”

She suspects that if every other group applying for a PrideFest booth were held to the same standards of “tertiary connections to objectionable things, nobody would be able to walk away clean.”

Instead of discriminating against people, Kat says RMMRA welcomes anyone who wants to help spread awareness about men’s issues, regardless of their group identity.

Aaron is especially perplexed by the ban, as he says one of the reasons for founding RMMRA was to set itself apart from some of the more divisive aspects of men’s advocacy.

“It feels profoundly distressing to know that there are apparently people who would view our labor of love in the same category as groups that espouse hate,” he says.

Aaron says his experience staffing the exhibition booth at last year’s celebration was “overwhelmingly positive,” having spoken with dozens of people about issues such as homelessness and support for victims of domestic violence. He sees a lot of overlap with the gay rights and men’s rights movements, in that both celebrate individuality and encourage men to be their authentic selves.

Yet Fuller says that, after the event, organizers received messages “questioning why the group was allowed to participate,” without elaborating as to what RMMRA may have done to generate the complaints.

Boulder Weekly reached out to Fuller and PrideFest organizers multiple times requesting any reports of discriminatory statements or actions by RMMRA members, yet received no further comment.

Panther Performance Auto Group — a “queer and ally-run shop,” according to Out Front Magazine — occupied the booth next to RMMRA’s the previous year. At first, owner Sam Panthers says he was skeptical about the group’s mission, but after speaking to them came to agree that there are indeed “struggles that apply uniquely to men.”

“I can tell you from having interacted with these guys, they are not a source of dysfunction or fear,” Panthers says, adding that he was “distressed” to learn about the ban.

Lexie, for one, has no hard feelings about the disagreement and hopes the confusion gets cleared up so RMMRA can to return to PrideFest again next year.

Matt, however, isn’t so hopeful. Instead, he thinks PrideFest is “blind to the fact that they are quite judgmental towards certain people.”

In his email to organizers, he wrote that making “assumptions on my character based on a label… really hurts and reminds me of so much judgment I’ve experienced in my life.”

Fuller understands that RMMRA members might feel singled out by the decision. However, he explains PrideFest is in a “no-win situation,” where admitting RMMRA would mean that “important constituencies criticize us,” while excluding them results in the men’s rights group doing the same.

As an alternative, RMMRA staffed a booth at the People’s Fair Art and Music Festival from June 1-3 in Denver, chatting with folks, handing out buttons reading “Super Dad,” “Male Positive Role Model,” and “I [heart] Men,” as well as a distributing a leaflet with a list of book recommendations for boys and links to articles about boys falling behind girls at school.

While receiving a few flippant comments from passersby, Mello says that they had a great time and enjoyed “talking with members of our local community, many of whom expressed their appreciation that Rocky Mountain MRA is working to raise awareness of the serious issues facing men and boys today.”

However, he worries that next year they’ll be banned from the People’s Fair too, after Kat found some public Facebook posts encouraging organizers to de-platform the group.

One in particular called RMMRA a “misogynist terrorist group with ties to white supremacists” and accused them of using the event to “spread disgustingly blatant misogyny (which is responsible for incel terrorism and is a part of white supremacist ideology).”

Another attendee’s post speaking out against RMMRA on the People’s Fair page was followed by a comment from a former director of the event, saying she was “embarrassed, disgusted, and so, so disappointed.”

Meanwhile, a third post read, “At the Denver Peoples Fair, and the fucking MRAs have a booth,” which received multiple comments including, “Toss an Accidental (read: aim at the head) Molotov cocktail in their direction,” “Burn it down,” and several fire and explosion-related memes.

Taken aback by the hostility directed towards his work on behalf of men, Aaron says, “I wish the people who oppose us would take the time to talk to us and understand what our goals and beliefs are before making such extreme conclusions and judgment about us.”

While Aaron, Kat, Matt, Lexie and the rest of the RMMRA crew won’t be in attendance, PrideFest will take place this weekend on June 16-17 at Civic Center Park in Denver. This year’s theme is “Say It Loud, Say It Proud!” which the event’s website says “encourages all community members to make their voices heard, be themselves, and to be proud of their achievements.”