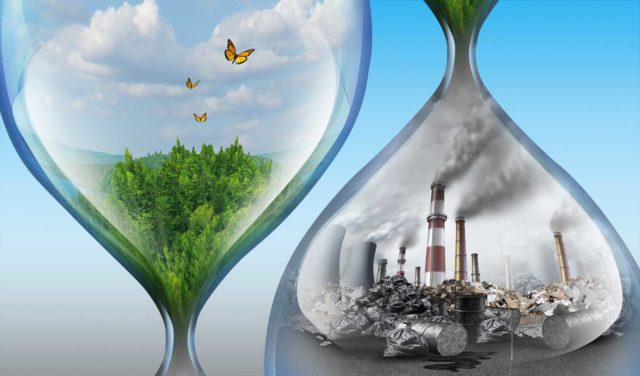 Since taking office nearly three years ago, President Donald Trump and his administration have been steadily undermining some of the nation’s key environmental protections, threatening to exacerbate the effects of climate change on communities and ecosystems around the country. They took it one step further on Thursday, Jan. 9, by announcing potential changes to the nation’s foundational environmental law, the National Environmental Policy Act (NEPA).

Unsurprisingly, the proposed changes caught the ire of environmental lawyers, conservation activists and some lawmakers around the nation as NEPA has guided almost every major infrastructure and construction project — airports, highways, bridges and pipelines — for the last 50 years. The proposed changes are particularly concerning for those in the West, as it could weaken environmental review for activities on public lands such as grazing, wildlife management and fossil fuel development.

“We knew there was a prospect that NEPA was in the crosshairs the moment that Trump won the White House in November 2016,” says Erik Schlenker-Goodrich from the Western Environmental Law Center based in Taos, New Mexico. “Bottom line, the proposal is reckless because it would allow the federal government to stick its head in the stand and essentially hide the consequences, the true magnitude of federal government action from the public.”

NEPA was first created by the Council on Environmental Quality (CEQ) and passed into law by Richard Nixon in 1970. It’s remained largely untouched since. In its passing, NEPA established a national framework that ensures all government agencies consider the environment before undertaking federal action, mostly through a review process that includes Environmental Impact Statements and Assessments. It requires agencies consider indirect impacts, transparency through draft documents and public comments and participation.

Trump announced the proposed changes at the White House, surrounded by industry leaders, trade and trucking unions. The group included Jennifer Houston, president of the National Cattlemen’s Beef Association based in Centennial, and Secretary of the Interior David Bernhardt, among others.

Proponents of the changes have argued the law is in need of updating, as many federal projects have been bogged down “by an outrageously slow and burdensome federal approval process,” according to Trump, as a result of a “dysfunctional bureaucratic system.” The changes, he explained, would expedite major infrastructure projects, a key priority of the Trump administration.

“If they’re so concerned about infrastructure investment, why is it that the Trump administration has proven utterly incapable of advancing any kind of infrastructure policy beyond gutting environmental rules?” Schlenker-Goodrich counters. “It’s revealing. It’s essentially a concession that they really do not care about infrastructure. What they do care about is paying back their supporters within the fossil fuel industry and on Wall Street.”

On the heels of Trump’s energy dominance policy, withdrawing from the Paris climate agreement, controversial rollbacks of national monument designations, loosening regulations on off-shore drilling and weakening methane emission regulations, to name a few, the NEPA proposal is especially concerning in light of the climate crisis.

“The NEPA rules in some respects are showing their age,” Schlenker-Goodrich concedes. “But improvements [shouldn’t be] essentially getting rid of all the best components of the NEPA regulations. The way to improve NEPA is to, in fact, strengthen the core requirements. … If they wanted to improve the rules, they would embrace robust analysis of climate impacts.”

The proposed changes would significantly alter the environmental review process by instituting strict deadlines of no more than two years; weaken the consideration of alternatives clause; allow for greater industry involvement in determining environmental impacts; and cut out the consideration of climate change altogether. In some cases, these reviews could no longer be required.

All of which could make it more difficult to legally challenge large-scale projects in the courts, which have traditionally sided with conservation groups that sue the federal government over non-compliance with NEPA.

“The Trump administration, because they have been so hostile to the climate crisis, has been approving and defending all oil and gas decisions by giving short shrift to climate analysis,” Schlenker-Goodrich says. “If these rules are finalized, those cases are more difficult [to win] by virtue of making it more difficult to contend that there are very clear requirements” to approve projects.

The proposed regulations also nix the requirement to consider the combined impacts of all projects in a given area or what is known as the “cumulative effects analysis.” This could have dire consequences for minority and low-income communities, which already experience higher levels of air and chemical pollution according to the EPA. (The residents of Denver’s Elyria, Swansea, Globeville and Chaffee Park neighborhoods, among others, used NEPA to push back against the current expansion of I-70 through the city.) It could also severely impact those living near oil and gas developments, where each project would be considered independently, regardless of cumulative emissions and hazardous air pollutants being released. All of this leads to decreased public scrutiny and participation, Schlenker-Goodrich argues.

“If you’re not fully disclosing impacts, you’re not robustly considering alternatives, then you are undermining public involvement,” he says.

The proposed changes cut the public out of the process, says Talasi Brooks, the staff attorney for Western Watersheds Project, a conservation group focused around education, public policy and legal advocacy of watersheds and wildlife in the West.

“It’s essentially cutting out the broader public in natural resource decisions and really getting rid of some of the environmental considerations that have typically guided decisions,” she says.

Western Watersheds is particularly concerned about how the proposed changes will affect wildlife management in the West, everything from grazing permits to vegetation treatment projects to predator control plans, which could in turn increase the fire risk in the already arid Western climate.

“Cutting the public out of these environmental reviews and eliminating some of the environmental concerns that are supposed to spur deeper analysis is a serious problem,” Brooks says.

For many, the proposed NEPA changes only add to a long series of actions taken by the Trump administration to reduce government transparency and cut out the public from major decisions. For example, the Department of the Interior (DOI) has gutted land management plans aimed at protecting the greater sage-grouse and sagebrush habitat, and it’s pushed through oil and gas leasing on public land with decreased public input. Weakening NEPA is just another egregious step under Secretary Bernhardt to rollback environmental protections in favor of industry interests.

A new analysis from CWP reveals that in eight out of 10 recent major policy proposals, the DOI moved forward with the changes despite widespread opposition (as much as 95% of public comments).

“What this shows is that if you’ve got money, if you’ve got lobbyists, if you’re an extractive industry, then your comment means a hell of a lot more than a general member of the public,” Prentice-Dunn says. “And that’s been true for the last three years.”

“When you fill your cabinet with the very lobbyists who have worked for the majority of their career trying to undermine this 50-year-old bedrock environmental law it raises a lot of questions about essentially what the intent is and then also what the outcome [will be],” says Jayson O’Neill with Western Values Project (WVP), a watchdog group based in Montana that focuses on special interests groups and public lands.

WVP has documented more than 10 cases where former and current clients of BHFS will benefit from the proposed changes to NEPA, including the Jordan Cove pipeline project, which would transport natural gas from Western Colorado for export out of Oregon.

“These are complex issues in a complex world that to arbitrarily say that you can’t take the time to study the impacts and the long-term ramifications of these multimillion, if not billion, dollar projects is short-sighted,” O’Neill says.

“If we’re going to have this discussion about revisions to America’s bedrock environmental law, we should have those discussions in the open, in the public and really with the consideration of Congress, who originally passed it.”

A few Democrats have publicly expressed their concern about the proposed changes, but by and large, with Trump’s pending impeachment trial and escalation of tensions with Iran, the news of NEPA changes seem to have gotten lost in the shuffle for most members of Congress.

It’s safe to say that if these regulations are finalized as written, they will be immediately challenged in court by a variety of environmental organizations and even states, especially those with aggressive climate commitments.

Before it comes to that, however, the proposed changes to NEPA are open for public comment until March 10 and the CEQ is holding public hearings around the country, including at the EPA Region 8 headquarters in Denver on Feb. 11. Whether or not the Trump administration considers public comments opposing the changes is yet to be seen.

“It’s still worth raising your voice, making a comment,” Prentice-Dunn says. “But I think in addition to raising [concerns] in the formal comment period, talk to your representatives, talk to your senators. This is still, at the end of the day, a democracy and action counts.”