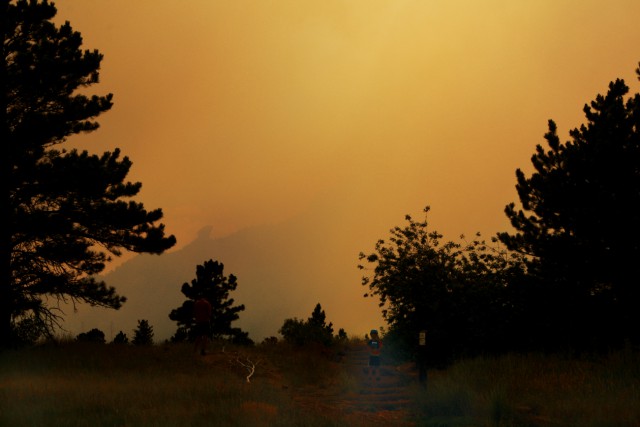 Crews continued fighting the Flagstaff Fire west of Boulder
on Wednesday, and local officials said they were “cautiously optimistic” that
the blaze could be contained in the next several weeks, provided winds don’t
flare up.

More than 2,400 residences remained on pre-evacuation alert,
however.

As of press time, the fire had consumed about 230 acres on
the west side of Bear Peak. Officials were asking those in the pre-evacuation
area whose property backs up to open space on the west side of town to turn on
their sprinklers as a precaution (the city pledged to provide additional
allotments to water budgets for those residents).

Boulder County spokesperson Barbara Halpin told Boulder
Weekly Wednesday afternoon that local officials were in the process of turning
over firefighting authority to a federal team, likely meaning that information
briefings would be more regimented, perhaps coordinated around the shift
changes at 6 a.m. and 6 p.m.

She said the fire had not grown aggressively as of press
time on Wednesday, but it would take some time before it is contained.

“The tankers are on it,” Halpin said. “This is sort of a
long attack-and-wait kind of fire. … It’s going to be weeks.”

Another county spokesperson, Dan Rowland, told BW that there
are about 266 firefighters and support personnel working on the fire, and more
on the way. Given the blaze’s new status as a federal Type 1 fire, firefighters
will be coming in from out of state, he said.

A third heavy air tanker has been requested, he said, as
well as five additional hand crews to join the two already on scene.

“They’re cautiously optimistic about keeping it where it’s
at,” Rowland said of the fire.

The wild card, of course, is the weather. Afternoon
thunderstorms like the ones that rolled through on Wednesday can kick up winds
and generate additional lightning-sparked blazes.

Crews of firefighters initially sent in to fight the fire on
Tuesday had to be withdrawn due to “extreme fire behavior,” Cmdr. Rick Brough
of the Boulder County Sheriff’s Office told reporters.

He said shifting winds caused firefighters to pull crews out
of the area. The fire was moving quickly and aggressively, creating spot fires
about a quarter-mile away.

The fire has been fought primarily with helicopters and air
tankers, in part due to the rugged terrain in which it started on the ridge
west of Bear Peak and into Skunk Canyon.

Brough said the fire was reported at around 1:15 p.m.
Tuesday, at the time that thunderstorms were moving through the area. He said
lightning is likely the cause.

About 25 residences in the Bison Drive area were evacuated,
and the National Center for Atmospheric Research was evacuated as a precaution.
An overnight shelter/evacuation center, initially located at New Vista High
School, was set up at the East Boulder Community Center, at 5660 Sioux Dr.

In addition, pre-evacuation notices were sent to at least
2,416 homes in South Boulder Tuesday evening. The boundaries of the pre-evacuation
zone were Dartmouth Avenue to the north, Greenbriar Boulevard to the south,
Table Mesa Drive and the foothills on the west and Broadway on the
east, according to the Boulder Office of Emergency Management.

As was the case with the 2010 Fourmile Fire, crews set up an
incident command center at the firefighter training facility near Boulder
Reservoir.

Officials asked community members who want to donate to the
effort to refrain from contributing materials or going to the scene of the
fire. They said making financial donations to voluntary agencies responding to
disasters is currently the most effective way to help. Financial gifts can be
made by contacting the Red Cross at www.denver-redcross.org or 303-722-7474 and
specifying that the donation is specifically for the Boulder Flagstaff Fire.

For up-to-date information, see www.boulderoem.com. In
addition, a call center has been set up to provide residents with information
about the fire and evacuations. The phone number is 303-413-7730.