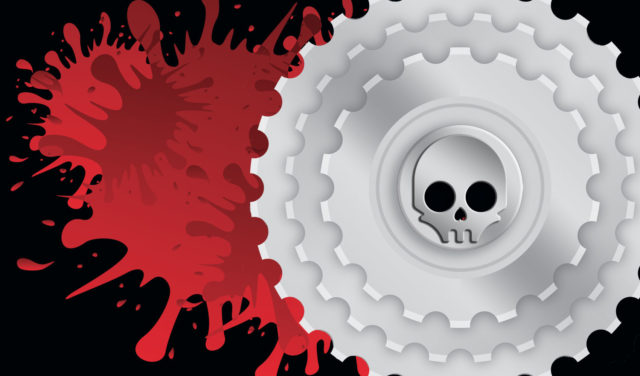 Bill Rigler, chairman of Boulder’s Transportation Advisory Board (TAB), was Davis’s friend, and he says the accident not only caused ripples in the cycling community, but also among those in the City and County who help shape transportation safety laws.

“Our community was really rocked by the tragic hit-and-run of Bill Davis by a drunk driver,” Rigler says. “The woman who hit and killed him had multiple driving infractions for impaired driving. Ever since July 2016, the [TAB], for reasons that were symbolic and practical, put safety at the top of our agenda.”

Dave Kemp, City of Boulder senior transportation planner, says the Davis incident, plus another incident at Arapahoe and 28th Street where a tractor-trailer hit and killed a cyclist riding in his blindspot during a turn, were hard to avoid. Education can help some in such instances, but neither better infrastructure nor enforcement can prevent those types of accidents, Kemp says, which he stopped short of calling “anomalies.”

Yet, doesn’t it seem like these kinds of accidents pop up all the time in local headlines? Search online and you’ll get a stream of accident reports between cyclists and vehicles from Sunshine Canyon to Longmont to way east Arapahoe, all with datelines in 2017. An 82-year-old cyclist was struck on Jay Road this month. Last month, a cyclist skidded into a stopped car on Lee Hill Road. In May, a cyclist was killed on Nelson Road, west of Longmont. The list goes on and on.

“It’s really good that the Daily Camera has begun to pick up on and put out information that these crashes are occurring. … I think that’s kind of a change,” Kemp says. “They hadn’t paid much attention to that in the past. And I think from a public notification standpoint, it’s good to note that this stuff is happening, … but the downside to that is that we don’t want to make it look like our community is unsafe, because it really isn’t unsafe.”

Talk to City or County officials, and to cyclists, and no doubt you’ll hear about the perception that bicycle and car collisions have increased in Boulder County. But what’s really happening out there — and who’s to blame?

The conversation comes at an appropriate time. Boulder City Council reviewed plans for changes to regional transportation this week, and TAB, in conjunction with RTD and Boulder County, will hold a public hearing on Oct. 9 about  ways to improve dangerous cycling areas such as U.S. 36 north of Boulder and Diagonal Highway. As these city, county and state transportation officials prepare to upgrade key bike and road corridors, local officials are using hard data regarding such accidents (and the psychology of why these crashes occur) to determine the future of Boulder County’s cycling infrastructure. 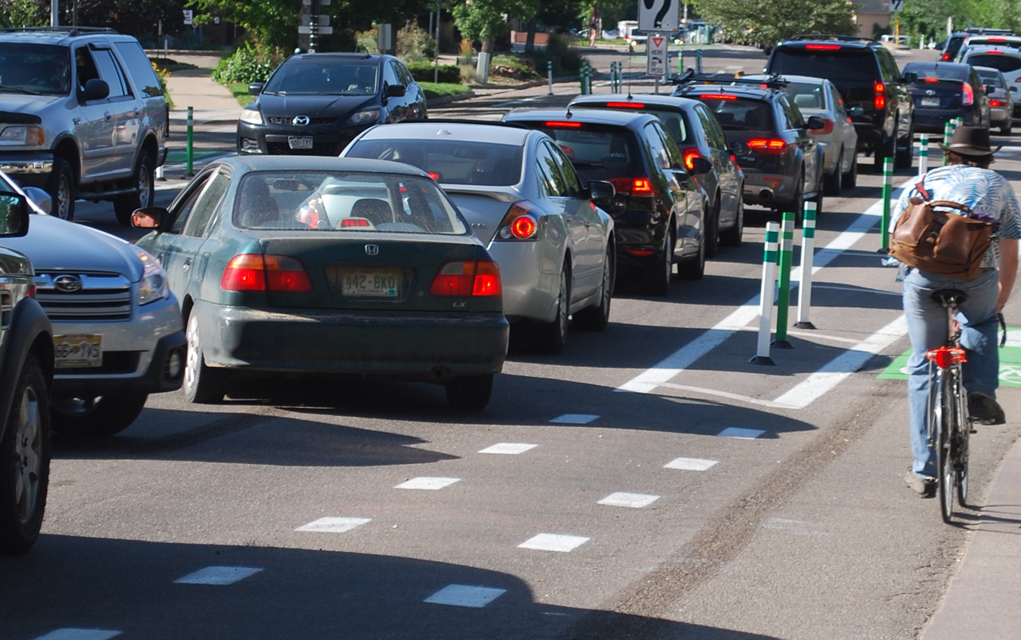 What collisions are happening?

The City of Boulder, with information from the Boulder Police Department (BPD), issued a report last year, “Safe Streets Boulder,” which identified key statistics about the rate at which cyclists and pedestrians collide with cars.

Between 2009 and 2014, there were approximately 3,275 collisions involving cars, pedestrians or cyclists reported to BPD. Although only 8 percent of those crashes involved a cyclist or pedestrian, they comprised 60 percent of all serious injuries and deaths. Last year alone, there were more cyclist and pedestrian deaths than in the previous four years combined. And most of those collisions, the data found, occurred in crosswalks.

“What that indicates to me is that for all of our talk about being this Mecca for cycling and promoting alternate modes of transportation, the reality is if people don’t feel safe riding their bike, they’re going to drive,” Rigler says.

Kemp says death and serious injury is “overrepresented” in the data; that is, the 60 percent rate of injury needs to come down, but that the overall number of accidents is consistent with previous years. Given that the majority of accidents occur in crosswalks, which are designed to protect those traveling outside cars, Kemp says preventing serious incidents comes down to people paying attention.

“Pedestrians are responsible for making sure they push the flashing yellow buttons. Bicyclists, when they can travel fast through the intersection, a lot of times they’ll look at the crosswalk as, ‘This is my safe zone’ and run blatantly through the crosswalk. … Then the other piece is on the motorist, which is [to yield] to cyclists or pedestrians in the crosswalk,” Kemp says.

Some of the more treacherous intersections, the study found, are near the CU campus. Baseline, between Broadway and 30th Street, for instance, had 34 collisions between 2012 and 2014. Other dangerous stretches included east campus (30th Street from Colorado to Arapahoe) and downtown (Broadway between Canyon and Spruce).

Last year, there were 203 collisions between cyclists and cars, with 28 serious injuries reported in the City of Boulder. That’s an eight-year high for the city, although the totals in previous years are no less than 166 collisions.

“It’s good that [collision rates are] not rising substantially, but it’s also bad that we haven’t really started to drive [them] down in a significant fashion,” Hyde-Wright says.

The state highway system through Boulder County is the most plagued by cyclist-car collisions, Hyde-Wright says, from U.S. 287 to the Diagonal Highway to U.S. 36, as well as Boulder Canyon and Lookout Road.

Rigler says he’s experienced the treachery of U.S. 36 between Boulder and Lyons first-hand.

“I was on U.S. 36 three weeks ago, and we were biking past an accident scene that had happened maybe 20 minutes earlier and the cops and road crews were trying to brush out the blood that was on the street,” Rigler says, explaining that the Colorado Department of Transportation (CDOT), which owns the road, should turn an eye toward improving safety there. “[Upgrades] could be improved signage encouraging people to share the road, stronger enforcement of the existing speed limits, and in those areas where there’s a high propensity for collisions, engineering treatments.”

Unfortunately, there’s just not a lot of data at the local level to compare Boulder County’s rate of cyclist and pedestrian collisions with like-sized cities and counties. Too, Hyde-Wright says Boulder County, by virtue of a process that sends incident reports through the state Department of Revenue to CDOT then to the County, has up to a two-year wait time on such data. Last month, the Governors Highway Safety Association released a study that found 45,000 cyclists were injured in collisions in 2015 around the U.S.

Kemp says, though, that there are two key takeaways no matter what the data indicates: that pedestrians and cyclists need to feel safe in order to participate in those activities, regardless of the data; and when it comes to reducing such collisions, the goal is zero.

Bringing that number down involves recognizing the issues that create such collisions. Data helps clarify some common issues: Of incidents involving bicyclists on sidewalks or bike paths, about 75 percent of them are traveling against traffic — when drivers turn off roads, they’re typically unable to see or don’t check twice for cyclists traveling parallel to them. Crashes occur mostly in the late afternoon and early evening.

When it comes to who’s at fault, drivers are about 3.7 times as likely to be cited than the cyclists or pedestrians with which they collide. But just looking at that number belies the true nature of the issue, which is that, yes, animosity does exist between cyclists and drivers (even though people in this county often switch between those roles) and that even though the consequences of collisions are ruined lives, a lot of crashes come down to a lack of focus.

“Transportation is a very emotional activity in that in this day and age, we don’t allow ourselves enough time to get from Point A to Point B, and there are all kinds of other distractions that are occurring at the same time: use of earphones, texting, eating a sandwich, yelling at your kids,” Kemp says. “It’s an interesting sociological phenomenon that we take on a different personality when we move around. So as a pedestrian, you might feel more privileged to take the crosswalk, and you’re looking to the other modes to slow down. But when you’re a driver, sometimes bikes or pedestrians or buses can seem like a delay and you get mad at them.”

Some of the solutions to solve the issues caused by that emotional and communication divide lie in infrastructure. Kemp says cyclists don’t know whether they’re pedestrians or vehicles and so they end up doing both, which creates a situation where each driver is unsure of what each cyclist will do, and vice versa. Better signage, lighting and lanes can help. Projects to build under- and overpasses at high traffic areas have been successful and more are planned for busy city and county corridors.

In the mountains, Hyde-Wright says the County has used flood reconstruction as an opportunity to mitigate future bike-car conflicts. In the past, the shoulder up Lefthand Canyon was only four feet wide. When cyclists rode side-by-side, cars would often have to swerve on mountain turns that have low visibility. So, the County expanded the shoulder to six feet wide so cyclists can comfortably ride beside each other, and cars can pass safely.

Cyclists, by the way, can ride two-wide only as long as they don’t impede the normal flow of traffic. Drivers must give three feet of clearance to cyclists while passing, and they may cross double yellow lines to pass if traffic allows.

Getting that kind of information out is what Kemp says is the focus of initiatives like Heads Up Boulder, in progress Sept. 25-29, wherein pedestrians and cyclists are educated about crosswalk laws. (They must activate crosswalk blinkers or be fined; they must slow to 8 mph, and drivers must stop for pedestrians at crosswalks or be fined.)

No matter the education, or, for instance, the free handouts of bike lights, it’s going to come down to the will of the people to improve collision rates.

“I won’t proliferate the [idea that it’s] bike versus car or car versus pedestrian because I think we’re all one in the same,” Kemp says. “But I think we sometimes take on a different mentality when we ride those different modes, which is why I like to ride the bus.”