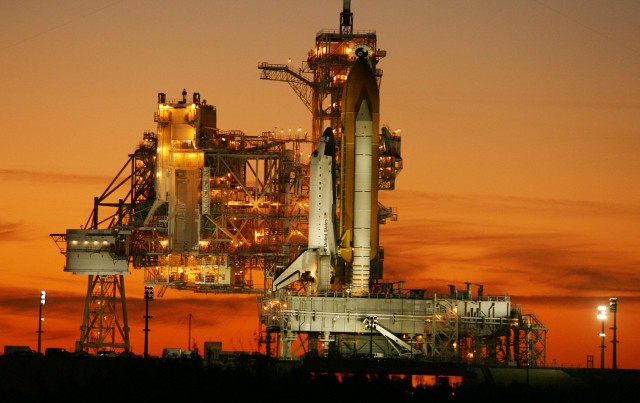 CAPE CANAVERAL, Fla. — Space shuttle Atlantis and its crew
of six astronauts are scheduled to blast off from Kennedy Space Center at 2:28
p.m. Monday on the fifth and last shuttle launch of the year — the most
missions NASA has launched in a single year since 2002.

The blastoff begins the final completion of the
International Space Station. After today, only five more shuttle flights remain
before construction of the $100 billion station is finished and it’s fully
stocked with supplies and spare parts. Then, NASA will retire Atlantis,
Discovery and Endeavour, ending three decades of shuttle activity at KSC — and
eliminate about 7,000 jobs.

Atlantis, loaded with spare parts, is expected to dock with
the station Wednesday. During the 11-day mission, the crew will celebrate
Thanksgiving in orbit.

The name of the mission says it all: “Stocking the
station.” Atlantis is carrying 27,000 pounds of spare parts — gyroscopes,
ammonia tanks and an array of equipment — that will keep the station flying
once the shuttle is retired.

“This flight is all about spares — basically, we’re
getting them up there while we still can,” said Brian Smith, the lead
space-station flight director for the mission.

With its huge cargo bay, the shuttle is the only spacecraft
in service able to carry many of the large pieces of equipment the outpost will
need during the next five to 10 years of its planned lifetime.

“We’re taking the big ones,” Smith said. “And
not only are they the big ones — they’re the ones deemed most critical. That’s
why they’re going up first.”

The mission will carry and install two special platforms on
the exterior of the station that will be used to store hardware. It will take
three spacewalks and some complex work with the station’s robotic arms to
attach the platforms to the station’s truss, or backbone.

The astronauts may also have to deal with a broken device
that recycles urine into potable water. It broke down Friday — though even with
the six-member shuttle crew joining the six aboard the station, there should be
plenty of water.

Atlantis will return to Earth with astronaut Nicole Stott, a
University of Central Florida graduate who has been one of the station’s six
crew members since late August.

Atlantis is also carrying experiments, including one
overseen by the University of Colorado at Boulder that will be monitored by
thousands of elementary- and middle-school students across the country.

The shuttle’s payload bay will carry two butterfly habitats
containing Monarch and Painted Lady larvae and enough nectar and other food to
support them as they develop. UC-Boulder, along with the students, will compare
the growth and development of the larvae in the weightlessness of space with
larvae being raised simultaneously in participating classrooms.

Atlantis is also carrying a piece of equipment that will
help pave the way for commercial rocket companies to carry cargo to the station
after the shuttle retires. The Commercial Orbital Transportation Services Ultra
High Frequency Communication Unit — called the CUCU, pronounced
“cookoo” — will allow the Dragon capsule designed by SpaceX, the
startup company founded by Internet tycoon Elon Musk, to communicate with the
station and ground control as it approaches the station.

“The unit … 1/8lays3/8 the groundwork for future …
Dragon flights to resupply cargo and possibly crew to the 1/8station3/8 when
shuttle retires,” SpaceX said in a news release.

Dragon is expected to make its maiden flight from Cape
Canaveral Air Force Station next year.

And on the ground NASA is hosting about 100 of its Twitter
followers at the KSC media site for a “tweetup” and viewing of the
launch.

A tweetup is a gathering of people who are active on the
microblogging site Twitter; this is the fifth one NASA has hosted but the first
to view a shuttle launch. All the available slots were taken within 20 minutes,
said spokeswoman Stephanie Schierholz.

Tweetup attendees are coming from 21 states, the District of
Columbia and four other countries. The event began Sunday with presentations by
NASA officials and a tour of KSC. To follow the tweets from the event, search
for #nasatweetup on Twitter.