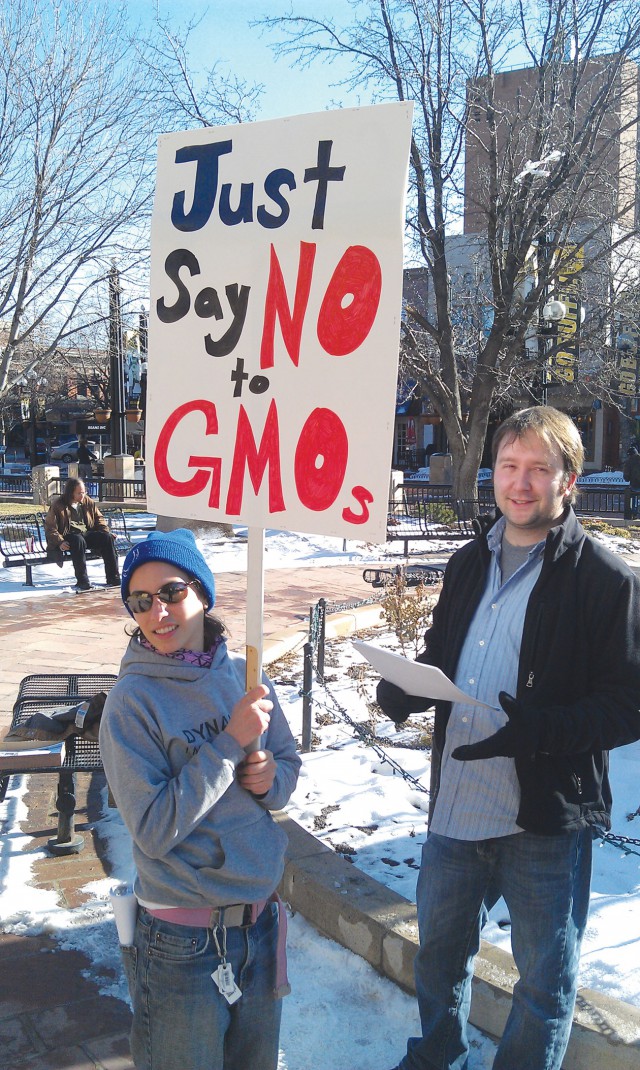 Activists opposed to genetically engineered foods are not singing the same tune when it comes to reaction to the Boulder County commissioners’ Dec. 20 decision to allow additional genetically modified organisms (GMOs) on taxpayer-funded open space.

On one side, leaders of the GM Know group are alluding to keeping up the fight in terms of voting down open space taxes and bringing in strong anti- GMO commissioners. But on the other side, GMO Free Boulder seems to have been pleased by aspects of the decision and is willing to work with farmers to find solutions.

After the commissioners’ unanimous vote on Tuesday to approve a cropland policy allowing genetically modified sugar beets to be added to the crops grown on county land (GM corn was allowed in 2003), anti-GMO activists said they weren’t surprised by the decision, but they differed on the next steps.

Scott Smith, co-founder of the grassroots group GM Know, told Boulder Weekly that “the Boulder New World Order is genetically modified organics” when asked about the commissioners’ decision to approve a cropland policy that allows for GM corn sugar beets, but no other genetically engineered plants.

“They saw the money to be made on sugar beets, and don’t see the health risks,” he says.

When asked about possible actions to pull back on taxpayer-paid open space purchases, Smith says GM Know would be holding a press conference on that topic in the next few days.

Another activist opposed to GMOs, Sarah Larrabee, told Boulder Weekly that one option is for voters to rescind money they have shelled out for open space purchases.

They say all six individuals running for commissioner seats being vacated by Ben Pearlman and Will Toor are opposed to GMOs, which could mean changes will be in the works after next year’s election.

Mary VonBreck, campaign manager for GMO Free Boulder, says her group had productive meetings with the commissioners and farmers in the last couple of weeks and reached some common understanding. She says that while she anticipated the “yes” vote on allowing GM sugar beets, she was pleasantly surprised by the commissioners’ decision to disallow other GM crops.

VonBreck adds that she was also encouraged by the commissioners advocating for Colorado’s congressional delegation to push for the labeling of genetically modified foods.

She says her group’s future agenda items, in addition to advocating for labeling, include removing GMOs from tax-funded school lunches.

VonBreck says her group doesn’t support pulling funding from open space purchases because of the decision.

“Politically, that was the best thing they could do,” she says of the commissioners’ decision to allow only GM corn and sugar beets on a case-by-case basis. “We kind of understood that sugar beets were in the bag. … Considering that politics is always a compromise, allowing genetically modified sugar beets, we saw that coming.”

VonBreck says a partial victory came when the commissioners decided to go against their staff and preclude other GM crops.

She adds that her group plans to work with farmers and try to create market opportunities that guide them away from needing to grow genetically modified foods.

“A lot of the discussions we started in the last couple of weeks with the county and the farmers made it into the discussion, so we were pleased with that,” she says, adding that “our way or the highway” is not the way to approach the argument.

“I don’t think either side likes being told that,” VonBreck says.