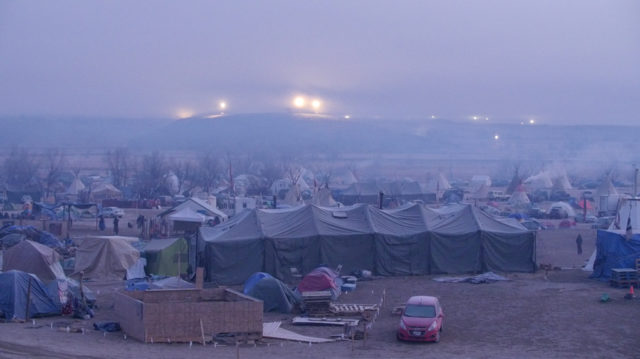 Since July, thousands of people have joined the Standing Rock Sioux in North Dakota as they protest the Dakota Access Pipeline (DAPL), which is slated to carry up to 570,000 barrels of crude oil every day for 1,172 miles from North Dakota to Illinois. The protesters, who call themselves “water protecters,” have been joined by members of other Native American tribes, environmentalists, international sympathizers and members of several labor unions.

Liam Cain, a card-carrying member of Laborers International Union of North America (LIUNA) out of Cheyenne, Wyoming, first traveled to North Dakota after he heard that large trade unions such as LIUNA and AFL-CIO called on the governor of North Dakota to protect union members working on the pipeline by sending in the National Guard.

Originally from Humboldt County, California, Cain first joined LIUNA in 2008 to work on a major pipeline being built through Cheyenne, and he has worked on several mainline pipeline construction projects since. Lately, he’s spent more of his time fighting wildfires around the country but still picks up jobs on pipelines during the off season.

In North Dakota, Cain joined up with the Labor for Standing Rock delegation, a group of workers in a variety of unions who have traveled to Standing Rock to show their solidarity with the Native Americans and environmentalists protesting the pipeline.

Cain says there have been delegations from public employee unions, Workers United and the Service Employee International Union, among others, who are spread out throughout the multiple protest camps. He’s camped out by the Union Camp flag in the main Oceti Sakowin Camp.

Most recently, he helped raise funds to purchase a large wall tent and spent several days helping a nearby kitchen in the camp winterize their operations. Although he personally has some environmental concerns over the construction of the pipeline, he’s mostly concerned with the way the government, corporations and even labor unions are discounting the indigenous people and local communities opposed to the pipeline.

Quoting a popular slogan of the early 20th century labor movement, Cain concludes, “To participate in these projects knowing how this is helping the further degradation of the Earth, how this is screwing over local communities and then squaring that away with actually believing that ‘an injury to one is an injury to all’ is very difficult to do.”