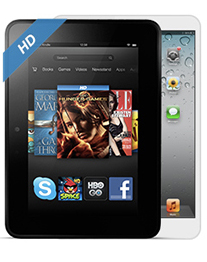 Competition in the tiny tablet market is getting fierce, thanks to an attempt by Amazon to ignite a rivalry with Apple.

In a large ad on its homepage, Amazon goes straight after Apple for its new iPad Mini, a device it says lacks the features of Amazon’s Kindle Fire.

Amazon dings the iPad Mini for a larger screen with a lower-resolution display than the Fire. It also boasts the better sound system and Wi-Fi of the Fire, comparing it directly to Apple’s product specs.

And the ad is headed by a quote from Gizmodo.com attacking Apple for charging more for an inferior product.

See the ad and the story at The Verge.