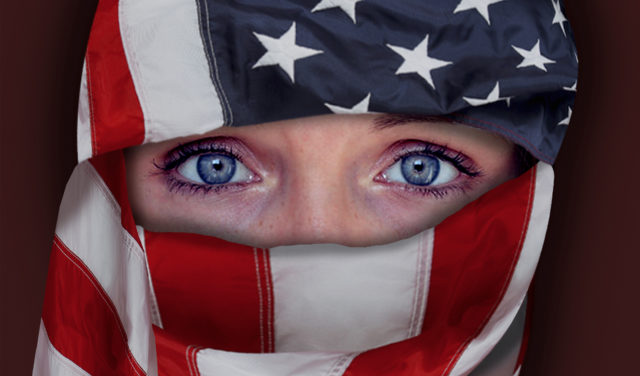 There’s been an escalation in violence against Muslims in the United States that coincides with the 2016 presidential election season, according to a new report published by Georgetown University’s Center for Muslim-Christian Understanding.

Earlier in the year, President Obama visited a mosque for the first time and talked about the potential dangers posed by bigoted anti-Muslim statements and proposals being made by many GOP presidential candidates. Referring to the “inexcusable political rhetoric” that has dominated the campaign, Obama said that it was no surprise that “threats and harassment of Muslim Americans have surged.”

In April, the Southern Poverty Law Center (SPLC) released a survey of approximately 2,000 teachers around the country, which indicates that the Republican campaign is producing a disquieting level of fear and anxiety among children of color and arousing racial and ethnic tensions in the classroom.

Teachers also disclosed an increase in the bullying, harassment and intimidation of students whose races, religions or nationalities have been the verbal targets of candidates. SPLC President Richard Cohen concluded, “We’ve seen Donald Trump behave like a 12-year-old, and now we’re seeing 12-year-olds behave like Donald Trump.”

By contrast, Muslims in Boulder County have been made to feel welcome by many residents. On Dec. 20, 2015, the Daily Camera reported that following the November terrorist attacks in Paris, the December San Bernandino shootings and Trump’s call to ban Muslims coming into the U.S., members of the Islamic Center of Boulder noticed a change in the way people treated them.

According to the article, “they’ve experienced an outpouring of support ranging from gifts to kind gestures at stores to thoughtful emails and messages.”

Similarly, the Center’s Facebook page has also been overwhelmed with friendly posts.

The mosque was founded in the 1970s by students at the University of Colorado Boulder who came from various countries in the Middle East. For decades, it was housed in a small one-story building near the Safeway at 28th Street and Canyon. As the congregation grew, worship services became very crowded. In 2011, the center moved into the former home of the Bethany Baptist Church at 5495 Baseline Road. The mosque is open to all Muslims (Sunni, Shia, Sufi).

Recently, Lara Lee Hullinghorst, the chair of the Boulder County Democratic Party, visited the center and asked if someone could speak to Democrats about their community. In April, Hadi Abdulmatin — a volunteer at the center who works in the telecom industry — gave a short address before the party’s executive committee.

Abdulmatin said there are estimated to be from 3 to 7 million Muslims in the United States. Since the census doesn’t ask people about religion, these are guesses. There are 40,000 to 50,000 Muslims in Colorado and about 1,000 in Boulder. About 25 percent are African American and 30 percent are white (that includes people from Turkey and the Arab world who identify as white on census forms). About 20 to 30 percent are of South Asian origin and 6 percent are Latino.

Muslims are diverse in their political opinions, he said. Most of them used to be Republicans, but in the last 15 years they have been voting Democratic.

He also said that when marijuana was legalized in Colorado a few years ago, someone at the mosque asked how they could vote for Democrats since Muslims aren’t supposed to use any intoxicants that interfere with reason (like alcohol or drugs). Someone else responded, “We are voting for a government figure, not the imam of a mosque.”

Abdulmatin told the Democrats that, generally speaking, Muslims favor raising the minimum wage to $15, favor universal health care and didn’t support the Keystone XL pipeline. In his research, he said he couldn’t find any Muslim leader anywhere in the world who doubts the reality of climate change.

He said many Muslims around the country seem to be enthusiastic supporters of Bernie Sanders. The best example is Michigan where Sanders won a big majority of Democratic primary voters in Dearborn.

The city has the largest proportion of Arab Americans in the United States. Many of them are Muslim but a substantial number are Christian. The world headquarters of the Ford Motor Company is located there with its gigantic River Rouge factory complex.

Sanders had campaign swag and literature in Arabic. He released a radio ad in Arabic denouncing Republican attacks on Muslims, concluding in English: “We have got to stand together to end all forms of racism.”

Abdulmatin drew laughs from the Boulder County Democratic gathering when he mentioned a 2010 article in the influential elite journal Foreign Policy which claimed that George W. Bush was America’s first Muslim president. The piece was written by Suhail A. Khan, a Muslim Republican who served in the Bush administration. He said that Muslims were, by and large, conservative: “…Sixty-one percent of them would ban abortion except to save the life of the mother; 84 percent support school choice. Muslims overwhelmingly support traditional marriage. More than a quarter — over twice the national average — are self employed small-business owners…”

Khan said Bush was, at least at the beginning, the first Muslim president. Bush was the first and only major presidential candidate to visit a mosque when he campaigned for president. The 2000 Republican convention in Philadelphia was the first in either national party’s history to include a Muslim prayer. Muslim community leaders told Bush about their civil liberties concerns over a piece of 1996 immigration enforcement legislation signed into law by Bill Clinton. Shortly afterward, Bush criticized this legislation in one of his presidential debates with Vice President Al Gore.

Bush would be endorsed by eight major Muslim-American organizations. He won more than 70 percent of the Muslim vote, including 46,200 ballots in Florida alone. Prominent conservative activist Grover Norquist would conclude that Bush was elected because of the Muslim vote.

Then the 9/11 attacks happened. Bush said America wasn’t at war with Islam. He met with Muslim American leaders on many occasions. He became the first sitting president to visit an American mosque and he appointed Muslim Americans to several prominent government positions.

But soon Bush would invade Iraq. Grotesque prisoner abuses at Abu Gharib would be exposed. Life became uncomfortable for Muslim Americans under the Patriot Act. In the 2004 election, more than half of Muslim Americans would vote for Democrat John Kerry and third-party candidates.

In the 2008 campaign, it was common for Republicans to make nasty and paranoid statements about “Muslims” and “Arabs.” Barack Obama was accused of being a secret Muslim. When prominent Muslim and Arab Americans offered to campaign for Obama, they were told to stay away. At a rally in Detroit in June 2008, Obama campaign volunteers removed two Muslim American women in hijabs who were seated behind the podium where the candidate would be speaking (the campaign later apologized for the incident).

Muslim Americans voted in record numbers for Obama, especially in electorally crucial swing states such as Florida, Michigan, Ohio and Virginia. Abdulmatin quoted a recent poll where 91 percent of Muslims said they are going to vote for Democrats this year.

Last December, the Wall Street Journal featured an article entitled “Muslim Americans Search for Political Voice in U.S.” Such a diverse multi-ethnic community has struggled to build strong organizations to advance its interests. Farhana Khera, president of Muslim Advocates (a group that focuses on legal advocacy and education), told the Journal:

“You have a mix of people who are immigrants and people who have been here for centuries and very much see themselves as Americans, and then you have other parts of our community who may question whether they’re being seen as an American. It’s like trying to herd a hundred cats, so to speak.”

Meanwhile, the Islamic Center of Boulder is quite welcoming to strangers. On May 3, the mosque hosted a dinner and event open to anyone. The United Nations Association of Boulder County sponsored a panel discussion called “One God: Three Perspectives — Judaism, Christianity and Islam.” The speakers were a rabbi, a Congregationalist minister, two CU scholars of religion and Abdulmatin. The topic was “extremism/zealotry/terrorism” in all three faiths.

“Very few have been brought up in strongly religious households, and there is a higher than average proportion of converts,” he said. He noted that MI5 (the U.K.’s domestic counter-intelligence and security agency) “says there is evidence that a well-established religious identity actually protects against violent radicalization.”

He said the “who’s who” of Muslim leaders and scholars in this country and around the world have condemned terrorism. Abdulmatin said Americans should not fear Muslims:

“Muslims are like anyone else in our society. We worry about the daily struggles of life like raising a family, paying bills, earning a decent living, marriage, divorce, etc. Like any other faith community, we engage in discussions about how to apply our faith, we have classes in theology and do outreach to the community.”

It is clear that the fear goes both ways and isn’t likely to subside so long as it can be exploited for political gain. In the meantime, we can all work to ensure that Boulder County remains a safe haven for our Muslim neighbors.