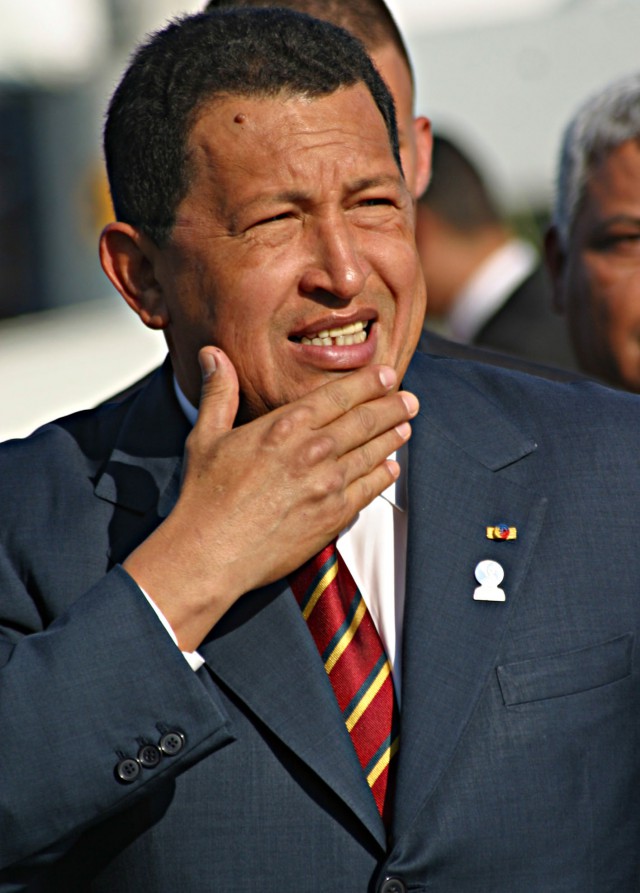 , — Not long ago, miner counted himself among President most ardent supporters. He was drawn to the fiery Venezuelan leader’s
concern for the poor, combative rhetoric attacking the country’s elites
and plan to unify this gritty industrial town’s labor unions.

But the sharp decline in his standard of living over
the last two years, government intimidation of his union and Chavez’s
failure to follow through on promises have pushed Campos into the
opposition camp. Last month he faced down riot police to lead a union
march demanding reforms.

“We all had a feeling that progress was coming,”
said Campos, a 49-year-old father of two. “But Chavez’s plans have been
a debacle and things have only gotten worse.”

Campos personifies the disaffection gnawing at the
leftist president’s base of support: blue-collar workers. It’s largely
responsible for the slide in Chavez’s approval rating to its lowest
level in seven years, according to a survey published last month by
pollsters of , the capital.

Chavez’s decline in popularity has breathed new life
into opposition candidates eyeing September’s congressional elections.
Although Chavez, now in his 12th year in office, has outmaneuvered them
in the past, often by gaming the state machinery in his favor,
candidates leveraging the discontent could capture up to half the
National Assembly seats this fall, analysts predict.

Chavistas now have almost complete control of the
single-chamber parliament as a result of the opposition’s boycott of
the last elections in 2005.

Facing voter discontent in the past, Chavez “always rose above it,” political scientist said. In 2003, with polls showing support ebbing as a recall referendum
approached, Chavez invented the “missions” — social programs that
offered free medical care, discount groceries and adult education to
the poor. Simultaneously, a voter registration drive added 2 million
voters to his hard-core base, and he easily won the vote.

Now Chavez seems at a loss as to how to respond, political analyst said, and an increasing number of supporters, suffering from rampant
inflation, high crime, scarcities and power outages, are feeling
“Chavez fatigue.”

“There’s a growing sense that the country is deteriorating and that Chavez is out of answers,” Sucre said.

Sucre and Carrasquero say Chavez could resort to a
last-minute gambit to maintain his grip on power, possibly canceling or
postponing the September elections, or heightening intimidation of
opponents.

With election season — and Chavez rhetoric — heating
up, the panorama is unsettling in this country, the fifth-largest
exporter of oil to .

To understand the disaffection, visit the Campos
home, where at midday on a recent weekend it was dark and sweltering.
The reason: was in the midst of a
six-hour electricity blackout, part of nationwide emergency rationing
Chavez put in place in January after the near-collapse of the country’s
hydropower system, a state of affairs critics blame on years of
mismanagement.

Chavez at first blamed the electricity crisis on
previous presidents, then on El Nino, Carrasquero said. In recent
public addresses, he has ignored the power rationing altogether.

Campos doesn’t have that luxury. Despite the lack of
air conditioning, he was afraid to take his family out for a drive
because traffic signals were down and the streets too hazardous.

There is no quick fix. , electrical engineering dean at Central University of in ,
says the system is so disabled that rationing involving cuts of 10
percent to 40 percent of power per week could last through 2011.

The blackouts are severely damaging the economy, already the worst-performing in .
The livelihoods of millions are at risk as shopping malls, government
offices, university classrooms and factories scale back hours.

Discontent with Chavez has other origins, but none
is more potent than inflation, which hit 27 percent last year and could
reach or exceed that level this year, said , an economist at a -based graduate school and think tank known by its Spanish initials, IESA.

Other hot-button issues are rising crime and what
many see as Chavez’s attempt to quash dissent with a spate of
high-profile arrests of labor leaders, political opponents and media
figures. In January, the government jailed local ironworkers leader for alleged “conspiracy to commit a crime.”

In a jailhouse interview with the Los Angeles Times,
Gonzalez said his only crime was organizing 3,500 fellow union workers
to demand back pay that has been due them for more than a year. He said
he may soon have company in the slammer: Dozens more union leaders are
facing criminal charges, he said.

Pollster said the arrests could discourage opposition voters from going to the polls.

“When he puts these people in jail, ordinary folks
think, ‘If he does this to those who are powerful, then I who have no
power at all, am I very vulnerable?’ ” Keller said.

Campos said intimidation won’t keep his union from
demanding that Chavez follow through on promises, including payment of
back wages, reinstatement of pensions and health insurance, and
commitment to better safety standards.

“It’s different than what we expected from Chavez,
but workers are slowly waking up,” he said. “Chavez wants us to make
desperate moves, but we’re keeping our cool.”