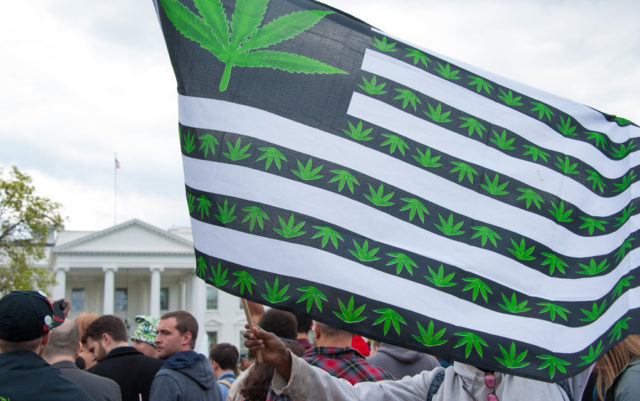 When cannabis was legalized recreationally in Colorado, there were two main factors that kept communities of color from getting in the game, says Sarah Woodson, the founder of The Color of Cannabis, a nonprofit seeking to level the cannabis-business playing field.

The first barrier was the state’s failure to pardon cannabis crimes or expunge anyone’s record of them post-legalization. Many black and Latino people who may have taken advantage of the opportunity to participate in the legal cannabis industry were already in prison for cannabis felonies like possession or intent to sell.

The second obstacle was a legal stipulation squeezed into the blueprint for recreational cannabis that barred anyone with a felony from entering Colorado’s industry for 10 years.

According to Woodson, these two barriers kept countless cannabis entrepreneurs locked in prison during prohibition, and locked out of the early days of the legal industry in Colorado — specifically, black and Latino entrepreneurs whose communities were disproportionately affected by America’s failed war on drugs.

“[Those factors] took a lot of African Americans out, they took a lot of Hispanics out,” Woodson says. “Because those are the people that statistically have cannabis convictions.”

Today, 87% of cannabis businesses in the U.S. are owned by white people. By contrast, only 5.7% are Latino-owned and only 4.3% are black-owned.

Woodson compared the situation to startup breweries in the wake of alcohol’s prohibition.

“Today, Anheuser-Busch is a powerful billion-dollar company that has created generational wealth for its [founding] family along with its employees,” Woodson says. “That’s essentially what was taken away from people of color, is the opportunity to create something like that.”

The Color of Cannabis aims to help level that playing field, though. Woodson’s background as a consultant for the Marijuana Industry Group and as the current Redress Chair for the NAACP Denver Chapter has given her the connections she needed to create this social equity cannabis organization.

Founded earlier this year, The Color of Cannabis advocates “openly, unapologetically and responsibly for people of color in the regulated market,” according to the website. They offer business connections for aspiring cannabis entrepreneurs, and legal advice and services for those communities most affected by the drug war.

She explains that their single biggest focus at The Color of Cannabis is working to contribute to policy-making and legislation. “It’s so important to have people of color at the table when policies are created,” Woodson says. “Especially when [those laws] can negatively impact a whole community of people.”

The Color of Cannabis recently helped spearhead HB 20-1424, “Concerning social equity licenses in marijuana,” which defines and promotes “social equity in cannabis.” It passed and was signed into law at the end of June. Next year, Woodson says the organization will be working on a financing bill as well as an expungement bill.

“We also run expungement clinics that are continually ongoing to help people clear their cannabis convictions,” she explains.

The first expungement clinic was held virtually on Aug. 22 in partnership with Vicente Sederberg LLP and local cannabis dispensary companies Lightshade, Native Roots and Terrapin Care Station. The clinics include presentations about record sealing and discussions about which cannabis crimes can and cannot be expunged. Then, each attendee has the opportunity to (virtually) meet with a lawyer who reviews their records and offers individualized advice and guidance on the expungement process.

And, Woodson adds, while The Color of Cannabis primarily focuses on helping people of color, their services and events are open to everyone.

Beyond events like expungement clinics, The Color of Cannabis is also hosting a recurring Social Equity Business Registration course. This 10-week online course is held every Tuesday through Oct. 27 and covers everything from the history of marijuana in the U.S. to cannabis compliance, tax regulations, cultivation and business plans. It also works to educate churches and community leaders in Denver of the economic and medical benefits of cannabis.

“There’s so many different things that we try to do,” Woodson says, “but one of the biggest is we need to get people educated on how the industry runs.”

Between its work on legislation, legal consultation, the business education and cannabis networking access, The Color of Cannabis has the power to tear down the barriers of entry that have held people of color back in Colorado’s cannabis industry.

“If you’ve been negatively impacted by the war on drugs, and you’re financially disadvantaged, this is a place for you,” Woodson says. “We’re going to help whoever needs help.”