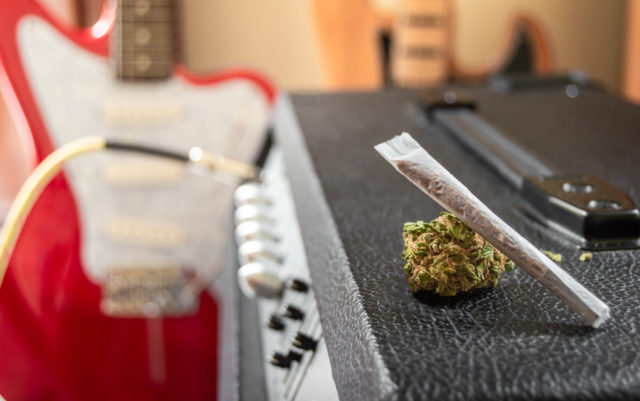 I don’t know about you, but I’ve found myself home on a Saturday night, chilling with my cat, listening to Hamilton, smoking a joint and wondering, “If marijuana could sing, what would it sound like?”

Just kidding. I’ve never once asked myself what pot sounds like, because plants don’t make noise. But they do produce electrical currents that humans have learned to measure and manipulate, and someone made a machine a few years ago that apparently translates the electrical currents plants make into sounds.

And so — you can probably see where this is going — Snoop Dogg had a hand in creating the first song composed from pot sounds.

The song, called “Sticky Situation,” because of course it is, didn’t feature Snoop, but R&B singer Anders and rapper Rich The Kid collaborating with producer FrancisGotHeat. The two-and-a-half-minute track was created by hooking a strain called Sticky Situation up to a thingamajig called a MIDI Sprout. The song debuted on the anniversary of Canada’s federal legalization of marijuana, which isn’t quite so random when you know that Anders and Francis are from Toronto.

MIDI Sprout’s website is a little more scientific, explaining that “probes” are used to “measure changes in electrical currents across the surface of a plant’s leaf. Our technology converts these fluctuations into note and control messages that can be read by synthesizers and computers to generate music and even video.”

The technology isn’t all that new. MIDI Sprout was first displayed as an exhibit at the Philadelphia Museum of Art circa 2012. The humans behind MIDI Sprout launched a Kickstarter campaign in 2014 to manufacture a larger number of devices that “inspired a global movement of ‘plant musicians,’” according to the MIDI Sprout website, “whose calming creations were especially suited for wellness practices like yoga and meditation.” There’s also an iOS app and another Kickstarter for the second generation MIDI Sprout dubbed, Plant Wave.

None of which answers the question: What does marijuana sound like? If you’re using MIDI Sprout, apparently whatever you want.

FrancisGotHeat, the producer behind “Sticky Situation,” told Variety that you can choose “different sounds and different MIDI signals,” like the sound of a grand piano or horns. So while the signals might be a little unpredictable — you’re not going to hook up a pot plant and hear a song in the traditional sense of the word — you can manipulate the signals to produce sounds in, say, the key of C, in the style of a Moog synthesizer, or the style of a plucked guitar string, or in the style of a drum. You can then record those sounds and rearrange them in a track to make a song like “Sticky Situation,” which is much more structured than the “music” that various artists and regular folks had been making with the MIDI Sprout.

So… millions of marginalized people around the United States are still languishing in the justice system for nonviolent marijuana offenses, but at least we know now that we can run the electrical currents of a pot plant through a plugin to make music.