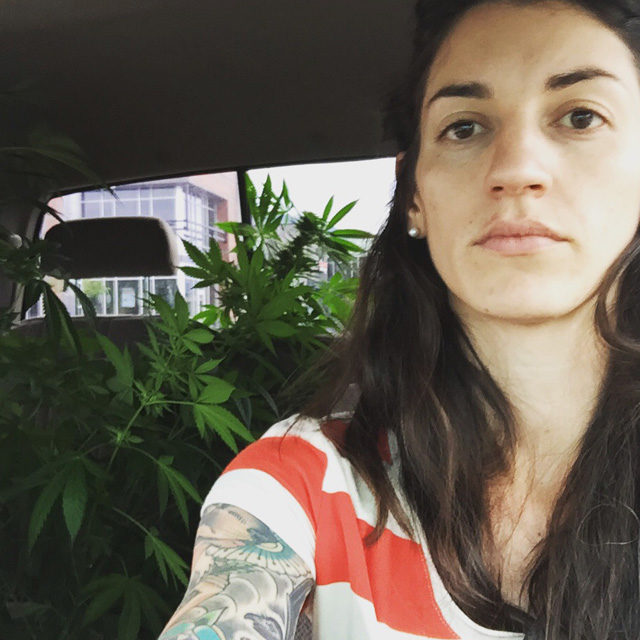 This is a picture of me, stopped at a red light, with two marijuana plants in the back of my truck. They needed to be moved from house sold to house bought, and it wasn’t until I started carrying them out to the truck that I was hit with the symbolic weight of the move.

Instinctually, I hid them from the street with my body as I carried them from house to car and car back to house, so sneaky-like that I could hear Fred Flintstone’s tinkle sound effect as I tiptoed across the lawn. I couldn’t help but feel the heightened sense of doing something that, whether barely legal or illegal in Colorado, was so overtly a federal offense.

There’s nothing like carrying a full-grown pot plant in full bloom across a suburban lawn to remind you that it’s not like this everywhere. According to Leland Rucker of Sensi Magazine, in 2015, police made 643,121 arrests for marijuana offenses in the U.S., the vast majority (about nine out of 10) for possession. With this number ruminating in my head, I only made it down the street before covering the plants with a blanket; whether out of fear or respect, I’m not sure.

Needless to say, the plants and I made it safely to our destination, but as I drove I thought back to “that one time in Nebraska” — in quotation marks because I’ve talked to more than a handful of people over the years who have a “that one time in Nebraska” story themselves. These are stories of what could be called “marijuana profiling,” incidents when law enforcers in other states stop vehicles and perform marijuana-related searches because they are outfitted with Colorado license plates.

My story begins in the summer of 2011, just months before Amendment 64 would go to vote and pass, legalizing recreational marijuana in Colorado. Again, I was moving, then from New York City back to Colorado, and all of my worldly possessions were stuffed into the back of my slick and golden Mazda 3, replete with Colorado plates.

A Westerner, I’d never driven through the Northeast so I made a road trip out of it, winding up through Maine, dipping into Montreal, crossing over the Great Lakes and stopping to visit family in Wisconsin. It was there that a friend convinced me to take an extended layover in St. Paul, Minnesota, to work for 10 days selling tiny fried donuts at the state fair.

With 3.5 million visitors a year, the biggest state fair in the country lies in Texas, a distant second place going to Minnesota’s fair, which draws 1.8 million visitors. But the title of “biggest” and its accompanying bragging rights are hotly contested because in Texas they have 24 days of festivities to draw in those crowds, while in Minnesota they do it all in 10. I’ll leave it at that, except to say that with a hot bag of donuts in your hand and Garrison Keillor’s voice piping out of the arena, it’s hard to argue that Minnesota’s fair isn’t the best.

For 10 hours a day, on all 10 days, I hung out with carnies, sweating it out next to friers while we listened to Kid Rock and coated greasy pastries with sugar. At midnight I’d go home to a rented fifth-wheel trailer to drink some Hamm’s and play cribbage. It was a temporary routine but a memorable one.

At the end of the gig, the donut crew loaded up for the next fair and paid me and my friend in cash. We hit the highway, stopped at the outlet stores and blew a cool hundred on new Nike gear. Tags still on the clothes we’d bought, we got back in the car, still stuffed to the brim with all my worldly possessions, and headed to Colorado. It was the middle of the day and we had the headlights on.

About half way through Nebraska we got pulled over. It turns out one of the headlights was flickering on and off, apparently off just enough to warrant not just a stop but a ticket. “A nit-picky bummer but no biggie,” I thought.

Two hours later I was sitting on the side of the highway with my hands on my head. Having found mounds full of cash in the pockets of my new jacket with the tags still on, the cop had been bombarding me with questions about weed for hours. Sometimes he was nice about it, like “Where’s the weed again?” And sometimes he was a bit more direct, ordering me to stand up and look him in the eye and tell him who I bought the drugs from.

Meanwhile, my friend was in the backseat of the cop car, having undergone his own rounds of interrogation. The officer had gone through each and every bag in my car, all of my things now strewn carelessly on the side of I-80.

Another hour later and he finally let us go. He didn’t find any drugs because we really (really) didn’t have any. He drove away and I started maniacally laughing. To this day I have never seen anyone as pissed off as my friend was then. We crammed the stuff back in the car and got back on our way home to Colorado, beckoning then like it never had before.