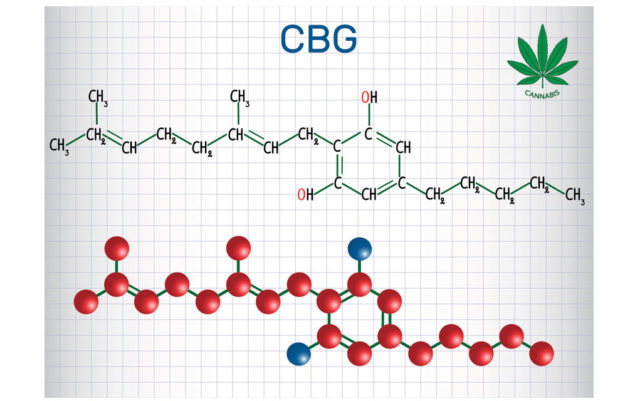 With more than 120 identified cannabinoid compounds found in cannabis, you can bet your bottom dollar you’re going to keep seeing new cannabis products crop up with three letter compounds you haven’t heard of before.

Allow us to introduce you to CBG, cannabigerol.

Unlike it’s uber-famous cousin CBD, which constitutes up to 40% of the cannabis plant’s extract, CBG is a much more minor constituent, making up about 1% of the plant’s extract. That’s because during growth, most CBG is converted into other cannabinoids, primarily THC and CBD.

Like CBD, CBG is non-psychoactive, so you won’t get high when you ingest it.

The human body has two main cannabinoid receptors, CB1 and CB2. CB1 is associated with the nervous system while CB2 has an effect on inflammation. The dozens and dozens of cannabinoid compounds found in marijuana interact with these receptors, often producing medically beneficial results, like CBD’s antiepileptic properties.

As for CBG, there’s still a lot to uncover about what it may be capable of in the human body. But animal studies have shown that CBG stimulates receptors involved in pain and heat sensation and may also play a role in blood pressure regulation.

In an article for lifestyle website Real Simple, Matthew L. Mintz, an internist and primary care physician practicing in Bethesda, Maryland, lays out some possibilities for CBG in medicine.

“In regards to specific diseases, there are two animal studies showing that CBG may be beneficial in inflammatory bowel disease (like ulcerative colitis and Crohn’s disease) and Huntington’s disease (an incurable brain disease). Test tube studies have also shown CBG to have antibacterial properties and prevent colon cancer,” Mintz said.

Moreover, European research shows evidence that CBG may be an effective treatment again the incredibly aggressive methicillin-resistant Staphylococcus aureus (MRSA) microbial strains, which are resistant to several classes of drugs. MRSA can often crop up in hospitals, nursing homes and dialysis centers where people are immunocompromised. It can wreak havoc because it’s so difficult to treat.

CBG has also been shown to be a non-psychoactive appetite stimulant in rats, as well a muscle contraction inhibitor, which could aid in the treatment of muscle dysfunction disorders such as incontinence.

“Because it is non-psychotropic,” Jacqueline Havelka writes for Leafly, “CBG has a promising wide range of potential applications … as an analgesic, therapy for psoriasis, and as an antidepressant.”

You’ll surely see CBG products popping up in your local dispensary soon if you haven’t already.