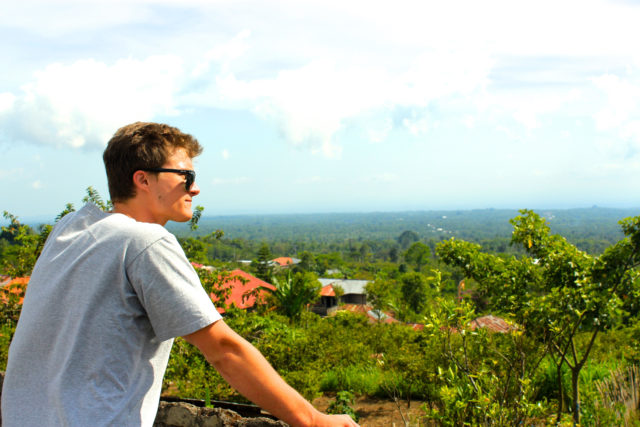 The pool rippled between us. The sound of water lapping its sides was the only noise as I stared at the stranger and pondered his question.

“Do you want to smoke a bowl?”

Under any normal circumstances, the answer wouldn’t have taken a second thought. I wanted to. However, circumstances were anything but normal: it was 5:03 a.m., I hadn’t slept and was still drunk from a long night out, my plane was leaving in less than two hours, and I was in Bali, Indonesia, a part of the world where cannabis isn’t just frowned upon—it’s persecuted to the most extreme extent of the law.

I was on the tail end of a week-long trip, riding motorbikes, hiking volcanoes, meeting friends, drinking Bintang, and nursing hangovers on busy beaches—all the tourist stuff. I’d come from Australia, where I’d been thoroughly warned about using cannabis in Indonesia.

“Don’t mess with it while you’re there,” I’d been cautioned again and again. Simple possession in Indonesia is an automatic five-year prison sentence. Cops would set you up; they’d try to sell you weed, tell you to step into an alley-way, exchange money for a bag of Thai basil and BAM! They had you. Locked up in an Indonesian prison, shoulder to shoulder with all manner of criminals.

I didn’t want any part of it. I’d denied every offer all week long. I’d made it this far. But here I was, on the edge of this pool staring at a man I’d just met who’d started chatting from across the water as we both ate drunken early morning pizzas. He’d just gotten a tattoo. I’d just gotten a tattoo. He was a local. I was a foreigner. Why not share our meal together? And, hell, while we’re at it, “Do you want to smoke a bowl?”

But then again, this guy wasn’t trying to sell me weed. Right? He just wanted to smoke it with me. We’d both be party to this meager crime.

“Sure,” I replied after a moment. “I just have a flight I need to catch in an hour and a half.”

No problem, he said. In fact, he’d drive me to the airport himself.

It seemed like a good deal: Free weed, a free ride and a stoned flight back to Perth? I picked my pizza up and walked over, sitting beside him. “Phelix,” he said. I shook his hand.

We ate pizza. We talked. He packed a couple of bowls full of Indonesian ditch weed and eventually, when we were stoned, our plates were empty and the second bowl torched, he pulled a joint out of the baggie. “What do you say we smoke this while I drop my friends off?” he gestured towards his room. “Then I’ll take you to the airport.”

Again, I agreed. We rallied his friends, piled into his tiny car, dropped them off several blocks away and then Phelix parked at a beach to smoke the joint. He lit it, smoke curling up around his face. He inhaled. He passed it to me.

The question caught me off guard. “Uhh,” I searched for an answer as I hit the joint. “Do you sell weed?”

He laughed, taking the joint from me. “No,” he looked amused. “Look there,” he pointed with his chin at a model Ducati motorcycle on the dashboard.

Again he laughed. He hit the joint, his face looking skeletal as he inhaled. “Behind the Ducati.”

I leaned over, curious, and suddenly my blood ran cold. There, perfectly hidden out of sight was an Indonesian police badge gleaming in the sun.

A moist hand cinched around my wrist. I looked up at Phelix, whose smile spread wolflike across his face. He leaned toward me, smoke pouring from his nostrils and I shrank away in terror.

Pure fear. A jolt of adrenaline. I flailed madly, slapping and somehow rolled out of the vehicle. I got to my feet, trembling and ran, stumbling, hailing the first cab I could see, jumping in.

Before I could answer, Phelix was in the street, stopping the taxi with his badge. Then he was opening the door, grabbing me. I screamed. I rolled out the other side, kicked off my shoes and fled as fast as I could down the beach, through alleyways, back to my hotel for my pack, and immediately to the airport.

I made my flight, but only just. And I’ve never been so relieved to feel a plane’s tires leave the ground.

It was a close call—a brush with the law that could have had an ugly ending. And one that taught me an important lesson: For all of the work Colorado has left to do around cannabis, we’ve made an awful lot of progress. Not so long ago, cannabis laws here weren’t so different from Indonesia’s. And that is certainly something to celebrate.