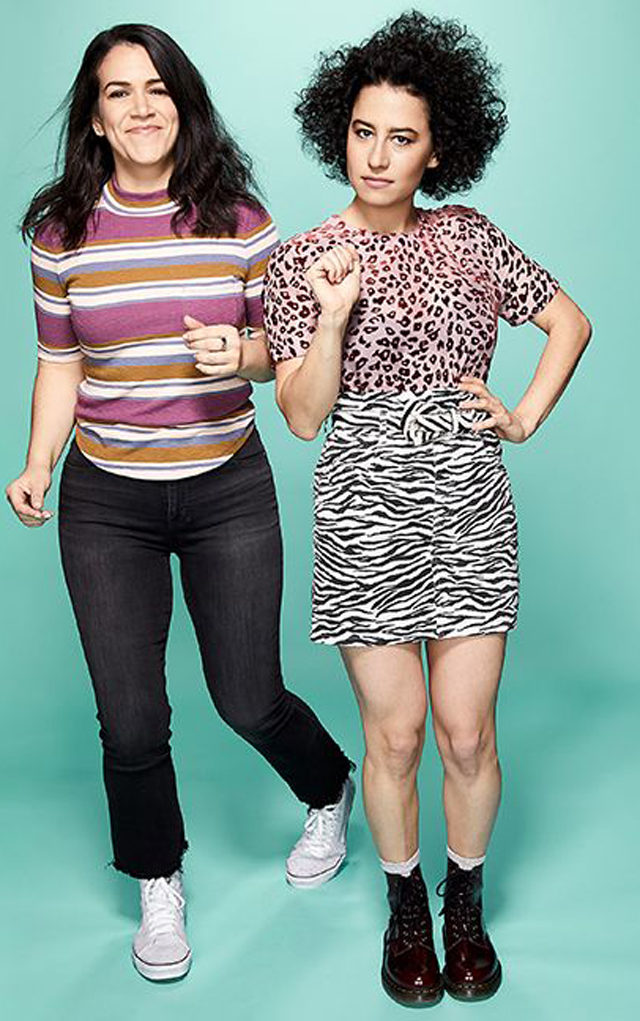 Four and three and two and one!

Jan. 24 is an emotional night for stoners everywhere with the fifth and final season premiere of Broad City, the critically acclaimed comedy that follows two perpetually stoned women living out their 20s in NYC.

If haven’t seen an episode of Broad City, stop reading this right now. I’m serious, go watch it. It’s the best show on television that isn’t The Bachelor or a true crime series.

What began as a YouTube web series has morphed into one of the most iconic cannabis comedies of all time. The creators, Abbi Jacobson and Ilana Glazer, met while working together on an improv team at Upright Citizens Brigade (UCB) and launched their web series in 2009. Eventually, Amy Poehler, who co-founded UCB, agreed to executive produce. Comedy Central picked it up and the show premiered on Jan. 22, 2014.

The show features best friends Abbi and Ilana (played by show creators Jacobson and Glazer, respectively) and their hilarious misadventures. It became an instant classic, not just for its brilliant comedy, but because the protagonists are women who are unashamed of their pot use, a refreshing break away from the tired dude humor usually associated with cannabis.

The antics of Abbi and Ilana are unprecedented. In the pilot, the girls work in the price of an eighth of weed into the cost of going to a Lil’ Wayne concert and that was one of the first times I felt represented as a female stoner on television in a real way. All of my favorite adventures with my best friend, Alex, who introduced me to the show and is basically my version of Ilana, start with us getting stoned. In college, when weed was still illegal and stigmatized, just driving around with her to find it was an adventure in itself and it’s that realistic portrayal of showing humor in the mundane that makes this show so great.

Sure, there was Jackie and Donna in That ’70s Show and Nancy Botwin in Weeds, but Abbi and Ilana aren’t just punchline sidekicks in a male-centric stoner series, nor are they troubled women looking to be saved. They are the weed queens we’ve always wanted. They’re hilarious and sexy and treat cannabis as an essential that’s part of ordinary, everyday life and millions of high-functioning stoner women everywhere have been obsessed with them ever since.

It’s not just the smoking that makes this show dope. Traditionally, female friendships have largely been written as frenemies who go to expensive brunches to drink and complain about men. I can’t relate to that life, mostly because my girlfriends and I actually like each other and none of us can afford brunch. But Abbi and Ilana? They epitomize what it means to be BFFs because no matter what kind of ridiculous shit is going down in their lives, they are always there to support each other over a bowl pack. Getting high to wander around Bed Bath and Beyond is a more accurate reflection of what I do with my friends.

It’s hard to believe that the show that gave us gems like “Yaaaaaas KWEEN” and encouraged us to ask dudes if they wanted to try pegging is coming to an end. The first episode of the final season starts with celebrating Abbi’s 30th birthday, which includes Ilana falling down a manhole while filming an Instagram story and Abbi having a crisis over getting a second credit card. Part of the episode is framed as an Instagram story, which lends itself to funny and realistic moments of generational humor — a crying Oprah GIF over a brunch spread; a musical zoom-in of a dog spotted on the subway. There’s even a scene of them stopping to scream at the Trump Tower, a big millennial mood.

Watching the duo get stoned, awkward and unconditionally love each other for the past five years helped get me through my 20s. From hosting watch parties in my apartment to watching it on the phone with my BFF Alex (who always puts her sunglasses on when she gets too high, even if all she’s doing is FaceTiming me alone in her room), Broad City always provided laughs and a reason to never feel bad about sparking up. But much like the show’s characters, the creators and fans are growing up, too. In the final 10 episodes, we’ll see the ladies navigating their place in the world now that they’re 28 and 30, rather than 22 and 25. Even though they’ve reached new stages of adulting, they still love each other as much as ever, something we can hopefully all relate to. Grab some munchies, your bong and your BFF and get ready for the Broad City premiere on Thursday, Jan. 24, at 10 p.m. on Comedy Central.