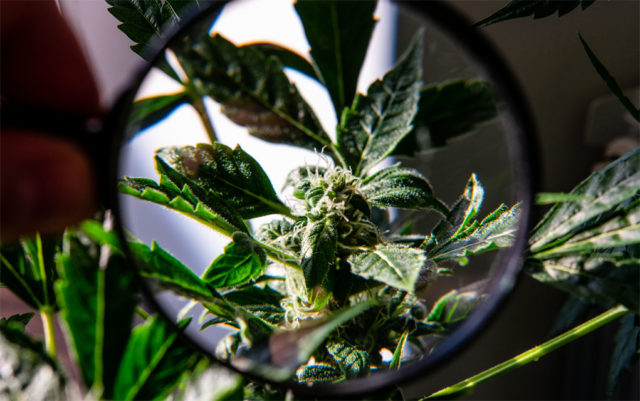 Scientists don’t discover new naturally occurring antibiotic molecules very often — and the last place anyone probably would have guessed to look for the next big one was in cannabis plants.

However, at Eric Brown’s “Drugs and Bugs Lab” at McMaster University in Canada, the last place most people look is the first one they try to explore. Brown, a biochemistry and biomedical sciences professor, prides himself and his lab on their out-of-the-box solutions to pharmaceutical problems.

“My research group is really focused on taking new, unconventional approaches to problems,” he says. They like to get a little crazy with their science. “And cannabis seemed just crazy enough.”

They began their experiment with a simple enough hypothesis: that cannabis plants don’t produce cannabinoids for human ingestion; that is, cannabinoids have to serve a greater natural purpose, likely to protect the plant. From what? That was what the scientists wanted to find out.

So, they investigated 18 different commercially available cannabinoids and started testing them against a common and notoriously challenging-to-combat superbug known as methicillin-resistant Staphylococcus aureus (MRSA).

“This bug kind of does everything from causing boils to causing devastating blood and respiratory infections,” Brown says. “It’s kind of a famous drug-resistant, stubborn, scary bug for any infectious disease clinician.”

While many of the cannabinoids exhibited some level of antibiotic activity against MRSA, when the scientists tested cannabigerol (CBG) specifically, they were really impressed by the results. It was surprisingly effective against MRSA.

So, they decided to take the study of this so-far unresearched cannabinoid a few steps further: Reproducing the CBG molecule in concentrate form in quantity and started testing it more rigorously against different infections.

Brown’s lab determined that CBG works as effectively against MRSA as the most potent antibiotic currently available to fight that infection: Vancomycin. Unlike Vancomycin, though, CBG works against MRSA by disturbing the organism’s cell membranes. That presents a slight issue of toxicity to humans, since it might affect our cell membranes as well. And Brown is up-front that they did notice some toxicity to human red-zones.

But, he adds, Vancomycin also exhibited this property, and its developers were able to circumvent that issue with relative ease. “Certainly, we wouldn’t be pursuing this if that wasn’t possible.”

On top of having an effect against MRSA, they found CBG was also effective at both preventing “biofilms” and eliminating existing ones. Brown explains that biofilms are collective “communities” of different micro-organisms (including bacteria, fungi and proteins) that adhere to surfaces, like contact lenses, catheters, dental equipment and surgical body-part replacement pieces.

When introduced into the body, these infections can be particularly tricky to fight, Brown says. CBG, however, demonstrated a therapeutic window for fighting the infections that those biofilms cause.

All of that is great news. Between the booming human population of planet Earth, our ever-evolving bacteria assailants and society’s over-use of antibiotics, the threat of a serious pandemic outbreak is constantly on the rise (and, with coronavirus, is not really just a threat anymore.)

That’s why Brown’s research will undoubtedly motivate even more research. The slow cultural (and even slower legal) acceptance of cannabis, has meant that legitimate science around this substance has been effectively stunted for generations. Now, though, that’s starting to change, and in a place like Canada, where recreational cannabis has been legalized at a national level, scientists and interested parties now have the legal leeway to start exploring the medicinal potential of cannabis and its cannabinoids.

Brown isn’t naïve about the implications of this discovery, though. He understands that it’s going to be a long time before cannabis-based antibiotics hit the shelves of pharmacies all over the nation.

“It’s a really long road to develop a drug,” Brown says. “We’re in the process right now of doing a systematic modification of CBG, to see if we can come up with a better version of CBG, a kind of functionally different structure.”

Essentially, they’re using the framework of the natural CBG molecule and rebuilding it to exhibit the highest antibacterial potential while minimizing human toxicity. And that won’t be fast or even necessarily easy — but it is still very exciting.

“Nothing’s simple in science or discovery,” Brown says. “But we’re also pretty jazzed about this.”