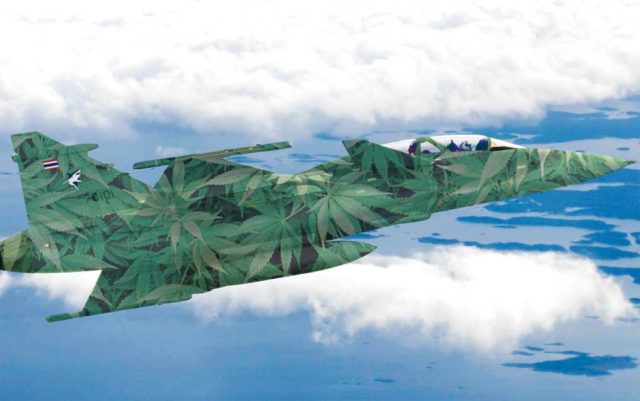 Here’s a story that didn’t get a lot of attention when it broke in January but should have: The United States Air Force has decided to lighten up on potential recruits’ past pot use.

Smoking marijuana before trying to join the service is no longer considered a disqualifier.

“We are always looking at our policies, and when appropriate, adjusting them to ensure a broad scope of individuals are eligible to serve. These changes allow the Air Force to aggressively recruit talented and capable Americans who until now might not have been able to serve our country in uniform,” said Air Force Chief Master Sgt. James Cody in a statement.

Airmen still won’t be allowed to use marijuana after they join, and the Air Force still won’t accept you if you’ve ever been “psychologically or physically dependent” on marijuana, or if you have been a dealer. But it is no longer interested in whether you smoked pot before you joined.

The service also lightened up on new recruits’ ink. It used to be having more than 25 percent of your exposed skin tattooed was a disqualifier. Now new recruits can have their entire bodies tattooed except for their faces, scalp, throat, and hands. Obscene, racist and gang-related tattoos are still out. No word on whether old ganja tattoos will be allowed.

Before we continue, let’s get the de rigueur pun out of the way: The new policy gives a whole new dimension of meaning to the phrase “Joint Strike Fighter”.

The new policy seems to have grown out of a multi-service review of recruiting standards ordered by then-Secretary of Defense Ashe Carter last November. So far the Air Force is the only service that has announced it’s changing its policy on marijuana.

As a practical matter, there is less to the new policy than meets the eye.

Presumably the other services are still following this policy.

The services long ago abandoned a zero-tolerance policy regarding past pot use.

However, the Air Force’s policy change is important for reasons that go beyond counting past tokes.

It’s no secret that since the 1960s, marijuana has been a political wedge issue in the U.S. Worse, it has been a social and cultural wedge issue as well, fracturing American society in a number of invidiously destructive ways. One of those ways is by alienating tens of millions of Americans who have used marijuana from the criminal justice system and the military.

That alienation is found in at least two generations of Americans, the boomers and the X-ers, and is gestating in the millennials. And it is doing real damage to the country’s ability to defend itself and maintain a decent respect for the rule of law. In order to function properly, those institutions require the trust of the American people — and their hostility to pot has cost them dearly in the trust department.

Undoing the damage is going to require full legalization, but a necessary pre-condition for change will be for the country’s governmental and public institutions to quit pounding on the wedge.

The Air Force’s decision is an important step in that direction. Hopefully the other services will follow suit.

Probably, sometime in the next few years, legalizations will have reached the point where the services will have to treat marijuana use the same way they currently treat alcohol use among active personnel — don’t use it on duty and if you use it off-duty, don’t abuse it.

In the meantime, the Air Force has a very practical reason for adopting its more culturally relaxed recruiting standards: It’s obviously missing out on too many otherwise qualified recruits that it needs.

While the service didn’t say how many recruits it was missing out on due to past inhalations, it did reveal how many it was losing due to tattoos. Air Force recruiters reported that half of their contacts, applicants and recruits had ink, and one in five of those had tattoos that may have been disqualifying, with the top disqualifier being the 25 percent “excessive exposure” rule.

If the marijuana disqualifier rules weren’t as bad, chances are they wouldn’t have been changed.