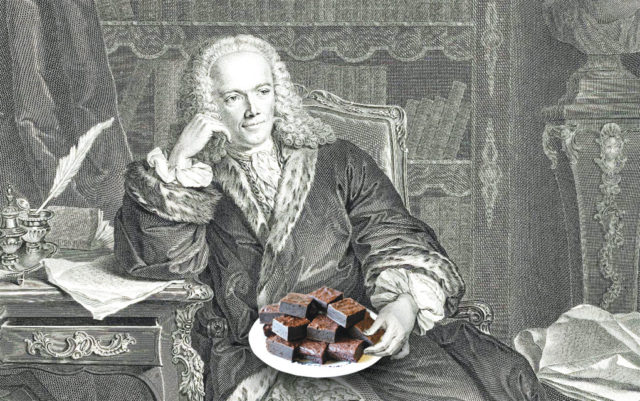 The Idea Fairy and I had just taken the brownies out of the oven when there was a thunderous pounding on the door that shook the whole house.

“Eeeeek, a raid!” she shrieked, and darted behind a computer.
“Come in,” I said shakily from behind the couch. “The door’s unlocked.”

The door flew open, and out of the purple haze stepped a guy dressed up kinda like Ben Franklin with a dozen college students in tow.

It was Adam Smith.

“Adam, what brings you down to Baghdad by the Rockies and who are your pals?” I asked. “And why did you try to knock down my door?”

“I’m in town to teach a summer seminar in economics, which my young companions signed up to take,” he said. “And it wasn’t me pounding on your door. It was The Invisible Hand.”
“The Invisible Hand,” I said incredulously. “I thought he was a metaphor.”

“So did I,” he said. “But just when I started invoking him a great pillar of purple smoke formed and started moving directly toward your place, so we tagged along. When we got here a ghostly hand emerged from it and started banging on the door.

“I have no idea why,” he finished.
“Well I was about to write a column on marijuana prices,” I said.
“Ah ha! That explains it,” he exclaimed. “Please tell us what you’ve found out!”

“Well, I noticed that in the last few months the price of pot seems to have come down a lot,” I said. “Off hand I’d say it has dropped 50 or 60 percent since the first dispensaries opened on New Year’s Day in 2014. Back then the average price for an eighth of an ounce was $65, and shops weren’t offering discounts on higher quantities, so a full ounce would set you back $520.”

“A simple matter of supply and demand,” Smith explained.
“Exactly,” I said. “On opening day in 2014, legal recreational pot was in short supply — it was all re-purposed medical pot because the state hadn’t allowed the recreational dispensaries to start growing before L-Day — and suddenly a whole new market potentially several times larger than the medical market opened up. So the price was high and stayed high until the first harvests of legal recreational pot came in.”

“And today?” he prompted me.

“Prices vary a lot,” I said. “But if you shop around you can find shops putting eighths on sale for as low as $25. Some places are still asking $60 an eighth for primo weed, but everyday prices are more like $35 or $45. And nearly everyone is offering discounts for larger quantities.”

“How much?” one of the students asked.

“You could get an ounce of selected strains for $200 to $225 in a number of shops,” I said. “I think the lowest sale price I saw last week for recreational pot was a strain going for $25 an eighth and $175 an ounce. You can find even better bargains on the medical side if you have a card.”

“Does that mean the pot market is offering ‘loss leaders,’ like supermarkets?” one of the students asked.

Smith shook his head. “Probably not,” he said. “It’s unlikely anyone is losing money by putting pot on sale. But the profit margin goes down on it. On the other hand, when price goes down demand goes up.

“The important point is the stores are starting to compete on price, which means there are abundant supplies available — as every square foot of available warehouse space in Colorado is turned into a grow,” he finished.

“I thought so too,” I said, “until I ran the price through an inflation checker. $175 today is roughly the equivalent of $44 in 1977 dollars. In 1977 marijuana was being brought in from Colombia by the boatload, and ounces were selling in Boulder for $40. So you might say legalization has rolled back prices to what they were when Jimmy Carter was president.”