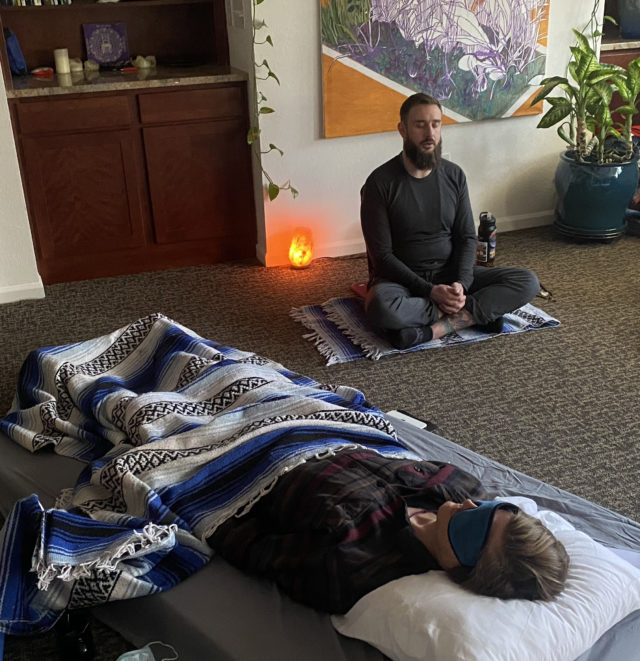 Cannabis sativa and I are no strangers. I use the good flower on a daily basis and in a variety of contexts: for exercise, or relaxation; medicinally, recreationally, socially, and sometimes anti-socially. But I’ve never really used cannabis in any kind of “mindful” or meditative setting. I’ve never really imbibed it in ceremony, with the intention of personal reflection and inner-exploration.

That changed last week, though, at the Center for Medicinal Mindfulness. Daniel McQueen, the Center’s founder, had invited me and a fellow Boulder Weekly writer to a psychedelic cannabis meditation session—an offer we leapt at.

“The inner visual experience [of cannabis] can be as potent as DMT and ayahuasca, but you’re going to have a lot of emotional support and a gentleness similar to MDMA,” McQueen explains as we sit in a circle in their group meditation room. Between us was an altar with a candle, mortar and pestle, a handful of crystals marking the cardinal directions, and a few handheld vaporizers lined up beside a small bundle of leather.

McQueen picks up the leather bundle, unrolling it and revealing a glass jar within. He opens the jar and instantly I recognize the familiar aroma of my favorite flower—today’s medicine: cannabis sativa.

“One of the things that I was always intuitively drawn to working with was making mixes and blends [of different strains]. It helps amplify the process,” McQueen explains. Sativa keeps people awake and increases their problem-solving creativity; indica provides a deeper body high and reduces sativa’s anxiety-inducing effects; and hybrids are very heart opening, he says.

“[Our blend] starts with nine different strains of indicas, sativas and hybrids, and we grind them up, mixing them together in this mortar and pestle.”

He then loads a vaporizer with the blend, showing us how to use the apparatus; he answers our questions, reassures us that we have all the support we need (in addition to him, we have our two sober “trip sitters” Jay and Mary); he guides us through a short, seated meditation, and then, together, we pick our vaporizers up.

“In this good way we begin this ceremony by inviting this plant medicine, cannabis sativa, into our hearts, our minds, our bodies, and our spirits,” McQueen says, thanking all the activists and spiritualists who helped make this ceremony legally possible.

We then give thanks to the four cardinal directions, the sky, the Earth, and the inner-self; imbibing from the vaporizers with each “prayer.” The smell of toasted cannabis fills the air. By the sixth inhale I’m feeling good and high—but I take round seven (and eight) for good measure. Then, I lie down on my memory foam mattress, don my eye cover, and settle in for the journey to come.

McQueen guides us through a body-scan meditation. He paints a picture, describing light filling our bodies. I try to follow, focusing on the visual, imaging energy filling my vessel, fighting intrusive thoughts and distractions as best I can. I lose track of McQueen’s voice as I wrestle my focus. I breathe slowly. I let the ambient music carry me forward.

Eventually I realize McQueen’s voice has disappeared altogether and I float freely, drifting on the rolling waves of my own thoughts.

Technically, cannabis isn’t a classical “psychedelic” like psilocybin, LSD, or DMT. But, McQueen asserts with the right set, setting, and blend of strains, the effects of cannabis can be very similar in nature. That allows people to move through their “trip” at their own pace, to a depth they’re comfortable with and in a direction they choose. Unlike more potent psychedelics that can significantly reduce the user’s agency.

In his book Psychedelic Cannabis: Therapeutic methods and unique blends to treat trauma and transform consciousness, McQueen argues that in the same way cannabinoids, terpenes, and flavonoids work together to produce an “entourage effect” that’s more potent than the sum of its parts (Weed Between the Lines, “All about those terpenes,” May 27, 2021) cannabis in combination with music, meditation, ritual, breath, therapeutic guidance and other components produces its own entourage effect that can elicit more potent, even mystical experiences.

To an extent, I experienced that for myself.

When McQueen’s voice disappeared, the colors and visions unfolding behind my eyes came into focus. Bursts of radiance, swirls of vibrancy, semi-lucid dream-like visions of scenes I’d never seen; faces, places, and spaces, familiar and unknown. I saw myself as a child, as a toddler, and welled with emotion. I hugged the child because why not? I forgave myself, without knowing what for.

I saw my naked, lifeless body lying on the ground, on a pile of green bills and print paper: all I’d ever earned or truly created. I felt myself shivering, though my body wasn’t cold. I felt myself choking on something book-shaped.

I don’t know how many of those visions I passed through, but an hour and a half after our session began, McQueen’s soothing voice gently drew us back. I sat up, slowly, very relaxed, blinking my eyes open to bowls of strawberries, salty snacks and hot tea. McQueen sat cross-legged, smiling placidly. We debriefed, talking about the experience, and McQueen (like the good therapist he is) suggested a follow-up session.

“That’s really when people can have big breakthroughs,” he explains. “Sometimes the first session is just about getting comfortable with the medicine, and things come up but don’t fully resolve.”

However, as a regular cannabis user, I felt as though I’d slipped straight into a strangely deep state for my first session. I can’t be sure how much of that inner adventure was my own imagination, how much could be attributed to the plant, and how much was a matter of meditating for longer than I normally do.

Likely it was a combination of all three factors. Either way, the experience left an impression on me and it was a profoundly different way to use cannabis than I typically do—one with a notably psychedelic edge. And with McQueen, it’s the perfect introduction to psychedelic therapy for those who are curious, but might be hesitant to make the leap.

“We’re trying to bring [cannabis] out of that [recreational] container and into a more intentional, mindful way to [use] it,” McQueen says. “There’s a lot of shyness and anxiety around this [plant] . . . we’re reintroducing people to a medicine that’s been slandered for a long time.”